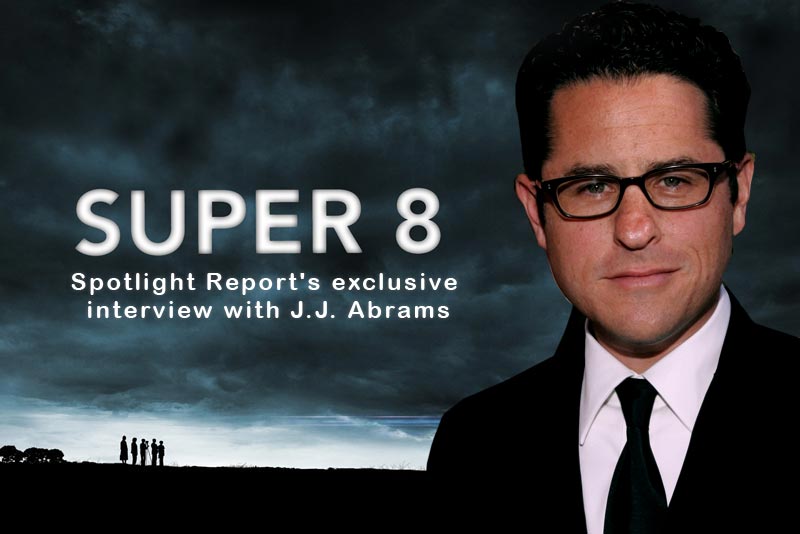 Last Friday June 3rd, we had the honor to be selected by Paramount Pictures to be part of an exclusive roundtable among a few websites, with Super 8 director J.J. Abrams. We were very flattered to have the opportunity to ask him a few questions about Super 8, so we focused on the music, influences and the viral campaign.

Here check out our exclusive interview with J.J. Abrams:

The music is very important in every single film. As Steven Spielberg has John Williams, you have Michael Giacchino. What role has the music in your projects and especially in Super 8?

Yes, I’m glad you brought on Michael. Obviously, the soundtrack to any film is critical and the obvious example is, if you watch Star Wars’ scroll at the beginning without the music is a very different experience, he laughs. There is something about the world that Michael Giacchino has done with the projects I’ve been involved in. He has always elevated everything, sometimes has created the mood entirely. He is someone who made super 8 films when we was a kid and working among him this movie, unlike the numerous TV shows  we’ve done together or movies, this one in particular had the kind of meaning for him as it did for me, because it was his childhood.

We work together throughout the editing process and pre-post. Defining, working on the score, what the music could it be and where… and he had to find a balance musically as I was working on finding a balance visually. There are tones, there were different themes. There is a family theme, there was the theme of mystery and this creature and there was the theme for Alice and our relationships, and finding a way to come along all that together is hard work, which I think he really did beautifully. I think this is one of his best scores. It was his childhood, the music was from his experiences back in this movie, and the reason what it touch me so much, is that it was so meaningful to him that I could hear it, I could feel it, I don’t need to understand it, he doesn’t need to explain it to me, I just can tell it was meaningful. I’m not saying he doesn’t write great scores when is not personal things, he just does… but is something about this score, that feels so profoundly emotional and it really does feel like it comes from a different place for him.

Super 8 has many iconic elements from many different movies like E.T, Close encounters, Cloverfield and It Comes From Outer Space from the 50’s. What would you say that it was the film that inspired you to come out with Super 8?

It really wasn’t anyone film. It was the experience of being one of those kids making movies in the late 70’s, and at this time of course, I was profoundly affected by the cinema of the time. So it was a combination of movies of Steven, George Lucas, Ridley Scott, John Carpenter, Cronenberg and Romero. It was just all this movies that made me love the idea of making movies, so going back to this time and writing the script and making the movie, it wasn’t ever about looking at Close encounters, E.T, Poltergeist, Goonies, Stand by me or any of this movies that I love.

Was really about, looking at that period of time and knowing of Steven’s involvement as a producer, that I was completely free to embrace the “Amblinness” of the movie, I didn’t feel self-conscious, it was like It’s an Amblin movie, I’m gonna make an Amblin movie!, that means if  the kids ride in their bicycles I shouldn’t feel guilty..I should celebrate.  If this spectacular thing happens on main street, that’s cool!

The great thing about Amblin it is that embrace heart, humanity, parent-child relationships, embrace first love and best friendship. Embrace confronting the things that scares you the most and finding your own voice and becoming a leader not a follower and learning that you can deal with tragedy and survival. There was all these things, that I love the potential about the movie that Amblin gave me license and Steven gave me license to truly embrace and dive into and suppose to try lightly and that was the biggest impact that clearly you can cite thousands of influences, like you can probably in anyone in movies. To me the Amblin umbrella allows every journey I do coexist weather is successful or peaceful.

All your films and projects are very mysterious and your viral campaigns are amazing. Why do you think that those viral campaigns work for J.J. Abrams’ movies and don’t work for other films?

Well, they work for some movies and they don’t work sometimes.We have a very talented guy, that kind of overseen the viral stuff and even though the Super 8 app that he has developed and that stuff I think is exactly as the movie itself. They try to figure it out what we wanna do, play with or experience, have access to or solve if we are going to be involved in this project.

Is not about thinking what they will do, or what they’ll want. It’s about thinking, this is kind of fun idea, let’s try this! …some works and some don’t like everything, but it’s an element of advertising that I’m sure ultimately doesn’t really make a big difference in the audience that want to see the film. Is one of those things I just think is a kind of goodwill. No one, is forced to play with, look at or get involved with that stuff, but is there if you want to.  Is just the kind of thing that keeps alive the spirit of the project and we are thinking in cool stuff to do in line to… I like that stuff!

So there you have, I hope you have enjoyed the interview as much as we did. And remember that “Super 8” opens in cinemas this week, and as we told you before this is one of the best movies we`ve seen in years, “a perfect job full of Abrams and Spielberg’s magic”, so don’t miss out!