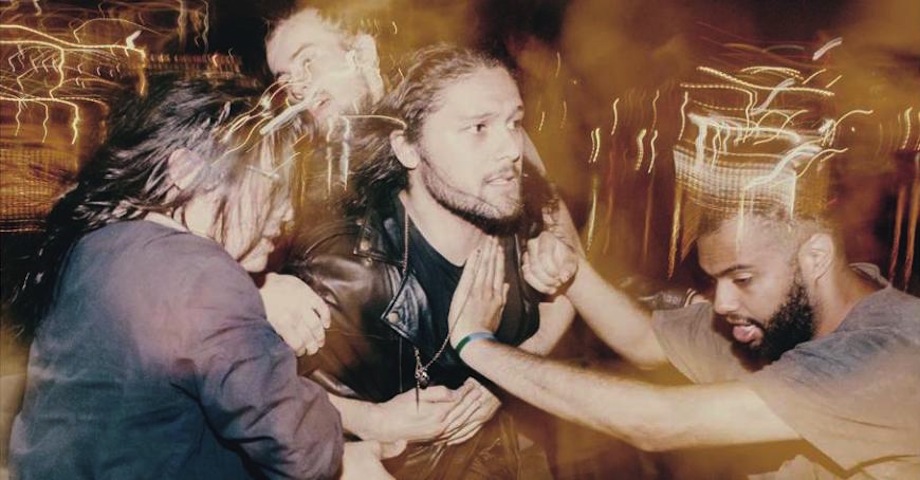 Australian band Gang of Youths have had an incredible month – having only just released their debut album ‘The Positions‘ a couple of weeks ago which debuted at #5 on the ARIA album chart. This comes as no surprise as the album is an emotional masterwork in which frontman Dave Le’aupepe bares all about his long-term relationship with a woman fighting terminal cancer. If you haven’t heard the album yet, I cannot recommend it enough – it is perhaps the greatest Australian release so far this year. You can most definitely expect to hear a lot more from this band.

Spotlight Report was able to ask the band a few questions ahead of its release about the songwriting process and the struggles and triumphs of making this record.

So you are about to release your new album ‘The Positions’ – can you tell me a bit about the concept behind the album?

I was in a four-year relationship with a woman who was fighting stage four cancer. Initially GOY was a passion project that was never meant to leave the studio.

From the get go, it’s very clear that these tracks are incredibly personal to you– are you a bit nervous to be sharing what is basically your diary with the rest of the world?

Good question and absolutely. But I’d rather be honest-to-a-fault than a coward and a liar I suppose. And if there is potential for one human being somewhere to find some poetry in my confession then that’s all you could ever fucking ask for, right? Typically I find it hard to engage with music that doesn’t emanate from someone’s id or yearning or innermost sanctum. I would feel odd not abiding by the instinct I have in me to share.

On that note as well, I’d imagine it would be very challenging to be performing these songs live without getting somewhat emotional – do you have a plan on how to deal with that?

I think the day I stop feeling emotional when singing these songs is the day I feel like I’ve turned into a soulless lump of shitty and pedestrian flesh. It would be easier, but I really feel that live performance is the right forum to be emotional. I hope to God I never lose it, to be completely honest.

Interestingly, you decided to release one song each day until the release of the album. Personally, I enjoy listening to albums for the first time as a whole body of work. Was there a particular reason you decided to reveal the album like that? You and I both. I initially was a bit funny about it, but I think our decision was informed by a desire to try and do something different with the release process and create anticipation for each track.

I read an article that described the ‘right’ way to listen to music – which basically stated no multi-tasking and listening to a record from beginning to end. Ideally, how/where/ what situation would you want your music to be consumed/listened to?

Honestly? Couldn’t give a fuck. I like listening to music on the train and rarely listen at home — that’s just me though. I think in my head I like the idea of people listening to The Positions in the car or on their commute. Perhaps that’s firmly rooted in my own taste.

What was the songwriting process like on the record?

What comes first – lyrics or melody?

Shit man — I think I like to do them at the same time. They’re too symbiotic to do separately — off the top of my head, I think I rattle off some phrases with some poetic motif and structure a melody around that and keep doing that one line until I’ve found a melodic idea that captures my attention. Does that make sense? Fuck, I have no idea if that makes sense!

What was one of your biggest triumphs and challenges with making this record?

Getting over my self-indulgent, alcoholic, grief stricken, tortured writer bullshit and becoming a functioning adult. Learning to like myself and care about the feelings of the kind people around me lending credence to my delusions of artistic grandeur. They were the triumphs. The challenges were mainly related to these things, technical issues with the recording and also the convoluted breakdown of my relationship with the subject of the recording. That shit was rough.

To end with a couple of light-hearted questions – What is something we could always expect to find backstage at a Gang Of Youths gig?

Hugs. A shit tonne of hugs. Come back stage? We’re going to hug the fuck out of you.

Probably asking you for a dollar to get the bus.