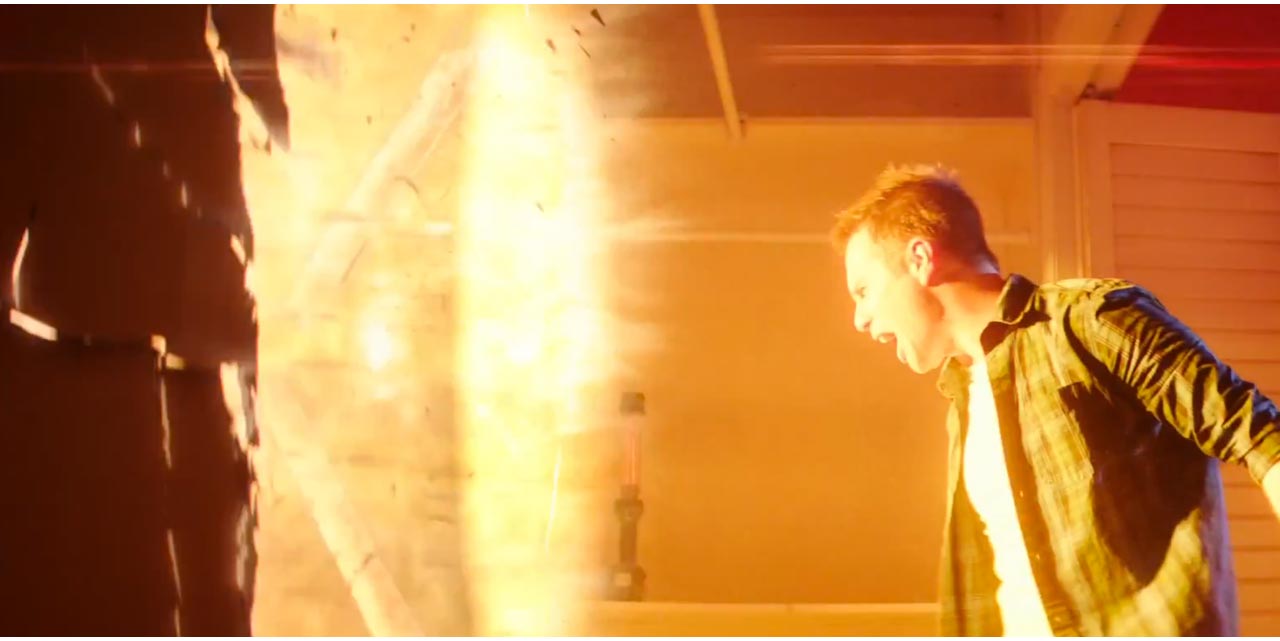 A read-through of Sam Rockwell’s resumé is like a read-through of the best of American cinema. Since his debut over 25 years ago, in the Francis Ford Coppola-produced horror flick, Clownhouse, his work has been as diverse as it’s been steady, with barely a moment to rest between jobs. Lawn Dogs, Confessions of a Dangerous Mind, Matchstick Men, The Hitchhiker’s Guide to the Galaxy, A Midsummer Night’s Dream, Moon, Seven Psychopaths, The Green Mile, Galaxy Quest, Frost/Nixon, Iron Man 2, The Way Way Back… a single DVD box set could barely contain them all.

He’s been a mainstay in the theater too, a long-term member of the LABryrinth Theater Company in New York City. He was directed by Philip Seymour Hoffman in The Last Days of Judas Iscariot, and later this year will return to Broadway in Fool To Love, written by renowned playwright (and Poltergeist screenwriter) David Lindsay-Abaire.

At 46, the California native shows no signs of slowing down. Last year alone he starred in four film projects, including Lynn Shelton’s romantic comedy Laggies, and the comedy drama Better Living Through Chemistry alongside Olivia Wilde, Jane Fonda and Ray Liotta. This year, Rockwell has another four slated for release, including the remake of seminal horror movie, Poltergeist.

“I remember seeing the original and it was really a mind-blowing experience,” he says. “I saw it in the theater and it totally freaked me out – it was scary and heartbreaking and just great, an amazing film.”

Poltergeist is director Gil Kenan and producer Sam Raimi’s 3D, contemporary take on writer Steven Spielberg and director Tobe Hooper’s 1982 classic, about a family whose youngest daughter is abducted by a poltergeist shortly after moving to a suburban neighborhood. Starring Rockwell as down-on-his-luck former minor-league baseball player Eric Bowen, it’s the story of an ordinary family dealing with extraordinary circumstances. When these angry spirits abduct Madison, their six-year-old, Eric and his wife Amy [Rosemarie DeWitt] recruit a team of scientists and psychics – including the clairvoyant reality star Carrigan Burke (Jarred Harris) – to get her back.


When you signed on for the remake, did you revisit the original?

Yes, I did watch it again when I was considering doing it, and it held up very well. In fact, it was daunting. At one point, for the first read-through of the script, I called JoBeth Williams and Craig T. Nelson and talked to them about the process of making the movie because I needed some help, some acting advice.

What did they tell you?

They gave me some good tips. Basically, they said that the focus should be about the children, and that was the key to the arc for them, emotionally. Essentially, it’s a child abduction film, and once you stay with that, you can’t go wrong as an actor. Sometimes acting with green screen and ghosts is tough, so the way to relate to it emotionally has to be about losing your children. The supernatural part is just a device to make what is really a child abduction film more fantastical and more interesting. That’s essentially what’s going on.

The original has held up really well: What do you think you’ve managed to bring to the remake to appeal to a new audience? Well, we changed the whole thing. The movie is from the 12-year-old boy’s point of view, so he’s really the protagonist. It’s essentially the same plot, but the characters are different: The main paranormal is an Irish guy that has a reality show, and my character is an ex-minor league baseball player who works for a tractor company. He’s this middle America everyman, and we made it that they were suffering from the recession.

Producer Sam Raimi mentioned that you wanted your character to be a whiskey drinker as opposed to the pot smoker Craig T. Nelson played.

Yeah, I loved the whole idea that this guy was unemployed and that he’s probably drinking too much. I think we’ve all been in that situation where there’s not enough work and you have too much time on your hands, and I think that was a realistic thing. You eat too much ice cream and you drink too much beer… I like the idea of him being an ex-baseball player, that he drank a little hard sometimes, and so that was something to overcome. So midway there’s a scene where he pours the bourbon down the sink, and for me that was something I fought for so he would have a transition, that he’s really going to try and take this seriously. Up until that point he was suspect of the whole ghost thing. He decides to man up and take care of his family, give up the sauce.

Yeah, Gil’s [Kenan] a very nice guy and very collaborative…. he let me change the role with the writer, David Lindsay-Abaire. Originally he was a much more timid guy, so we changed it so he could be more active and more complicated. He was originally a computer programmer guy, maybe slightly nebbish, and it didn’t quite fit for me. We shifted the part to portray more of my qualities, which is more of a blue-collar thing, maybe from the east coast.

You have great chemistry with your on screen wife, Rosemarie DeWitt. Did you know each other?

Yeah, she was married to a very dear friend of mine, Chris Messina, who’s a great actor, so I knew her a long time ago. She was on the New York theater scene, we were both doing plays. This is the first time we’ve gotten to work together on a movie, and she’s a great actress – I was very excited to work with her.

Does working on a horror movie like this feel at all spooky on set?

Sometimes there was a vibe, but I think it was more the power of suggestion. It was a long shoot, and we got very sick – me and Ro got bronchitis because it was very cold in Toronto where we were shooting. Plus at the beginning of the shoot I got hit with a baseball and had to get stitches in my eye. I was playing catch in the dark so it wasn’t very smart.

That must have made you think of the ‘Curse of Poltergeist’ story: Many horrible things happened in real life to some of the cast and crew of the original.

I’m not a very superstitious person; I just think that was stupidity on my part – it was pretty dumb. I don’t really think of that as some kind of hocus-pocus supernatural coincidence. I’ve heard all those stories, but you know…I think Spielberg is doing pretty well, and Craig and JoBeth are doing pretty well. I think it’s fun for the fans and helps promote the whole thing.

This isn’t your first horror movie experience – your debut back in 1989 was in Clownhouse, so you’ve kind of come full circle with this. How do you think the genre has changed since then?

It’s a very competitive market… there are a lot of horror movies now, and they’re getting scarier and scarier. The kinds of movies I grew up watching – The Exorcist, Rosemary’s Baby… I’m not ever sure modern audiences would find them scary anymore. Though, having said that, some modern movies seem like an homage to those older movies… like The Conjuring, which I really liked. It seems almost like an homage to The Omen and The Exorcist… and Poltergeist, actually.

Why do you think horror movies have endured?

I think people like the roller coaster ride of it all… they want to be scared. People just want to take that ride.

Poltergeist out for Halloween