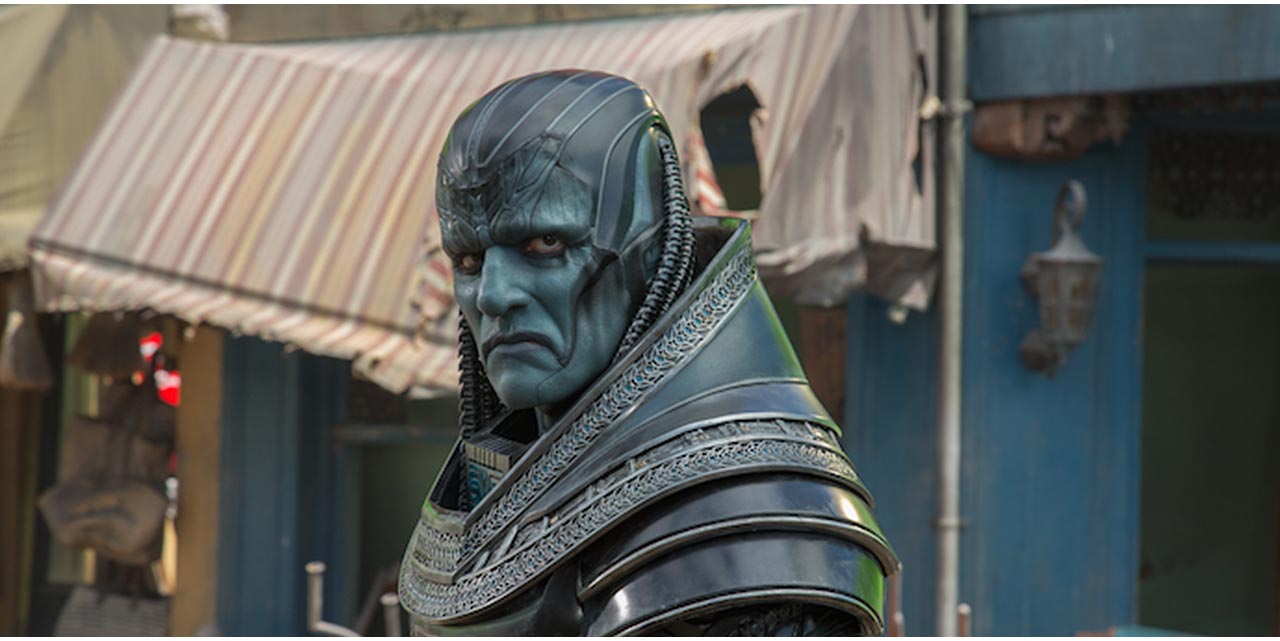 If the X-Men thought they’d faced their biggest challenge with altered timelines and killer robots in 2014’s Days Of Future Past, they’ve got a powerful new think coming. X-Men: Apocalypse sees an ancient, incredibly formidable mutant awaken from thousands of years of slumber and decide that the world of the 1980s needs a giant reset.

Bringing to life this complicated, godlike figure is the talented Oscar Isaac. Since his big break in 2002’s All About The Benjamins, Isaac has been working consistently in film, appearing in the likes of Body Of Lies, Sucker Punch, The Bourne Legacy, Inside Llewyn Davis, A Most Violent Year, and in 2015 alone, made a huge impact in both Ex Machina and Star Wars: The Force Awakens.

He talks Apocalypse’s philosophy, his own X-Men fandom and working with the “pit crew” who helped get him in and out of costume.

What was your familiarity with the X-Men?

I was a big X-Men comics fan! I collected X-Factor in particular, which I really liked, and which features the first appearance of Apocalypse. It’s actually because of that, because of how much I loved the character, that when I found out that they were making an X-Men movie with Apocalypse as the villain, I sought it out. I was very curious about what they were going to do with it.

How did Bryan pitch the angle on him? Basically, the idea is ‘imagine that God has been buried for the last 3,000 years, and he wakes up tomorrow and he takes a look around and realises, ‘“no, we’ve ruined everything, this is not what it was supposed to be,”’ and decides to change things.’ That’s it: what if God wakes up and he’s pissed! It’s the concept of the second coming, Christ returns to take the chosen ones and all the rest will be destroyed along with the world. It’s really intense, it’s really heavy and so this character is the embodiment of that idea. Or at least, as someone who believes that is their mission. On the other side of it, the non-religious side, there’s ‘what if this guy was the first mutant, and what if his power was that he was the first being to be able to actually, physically separate their consciousness from their body, to have, for all intents and purposes, a biological soul?’ It’s also that sci-fi notion that I thought was very interesting in a fun, mind-bending way.

What’s also fun is drawing from the different iterations of the comic. Because he’s changed quite a lot from series to series, whether it’s Apocalypse Vs. Dracula or the original ‘80s X-Factor or the cartoon. He moves from host to host and that’s part of the plan, and then at some point that gets interrupted for many thousands of years. When he awakens, he decides he’s the steward of the rest of humanity and of evolution, not only physical or biological, but spiritual, and when that’s in danger, he clears the forest for new growth, like he’s done many times in the past.

X-Men movies always have big themes, and it feels like he brings that too.

Yeah. It’s a purging that’s happening, so that’s part of the bigger theme. And this idea of a wrathful god and what that means. But “apocalypse” as a word doesn’t necessarily mean “destroy”. It means “reveal”, and he’s revealing the true potential of their power, of the people that choose to follow him. It’s partly why they follow him: because they see that this being actually allows for their most powerful self to emerge. And that’s one of his greatest strengths, his power of persuasion.

How was he brought to life? Was it a tough job? The design was challenging. My entire head was encapsulated in prosthetics and glue and plastic and tubes. What was fun about that was I was able to express quite a lot through that because of how thin it was. The suit was 40 pounds, and I had to wear a cooling mechanism underneath and my range of motion was incredibly limited. So for me, it became a challenge of how to express that in a different way. Obviously, we’re not doing naturalism here; it’s more akin to Greek tragedy and Kabuki theatre. I actually watched some Kabuki, paying attention to the physical traits that they used, because, for them, even small gestures are so important. Then I’d have to figure out how to work within it. What seemed most expressive, what was too much, what was not enough. I had an incredible make-up crew, guys from Legacy Effects, and they were fantastic and there the entire time, making little tweaks and adjustments.

Did they make it easier for you to get in and out of it?

Yeah, that was a process. At first, it was a three- to four-hour make-up job, and as the time went on, we got it down to about an hour, which was pretty astounding. And I had some great wardrobe people who were like a pit crew at all times; two costumers who would rip the thing off of me, because the heat was so intense and the make-up guys would come in and try to fix it up in between takes. Everyone found a way to do it so fast. At the beginning, it would take me 40 minutes just to put the suit on and we got that down to 15 minutes, so it was a very impressive team of people. And this is not even mentioning the CG that gets added later to aspects of the character, particularly in certain moments of the movie. So it really is a team effort to make this character come to life.

How did the cast welcome you? They seem like a fun bunch.

Apart from being Apocalypse, being able to work with Michael Fassbender, James McAvoy, Nick Hoult and Jen Lawrence, in particular, was so much fun. They’re so funny, relaxed and have two of these movies under their belts, so that was helpful, getting a sense of how they work. At first, most of my scenes were with Michael and that was an instant friendship and as great as I’d hoped it would be. So that really was the highlight for me, getting to meet those guys and working with them.

Did Jennifer commiserate with you about the makeup situation?

Oh yeah! I was her brother in blue! I felt her pain for sure.

How was it working with Bryan? He’s incredibly collaborative and such a smart man, and really switched on into the themes of the story and what we’re trying to do there. I had a great time with him and Simon Kinberg just talking about what’s possible with this character and how to make it something interesting and special, not only for the audience but also for us; what did we want to explore so we could make it personal? And he was very open to those ideas and to playing with the themes and the dialogue and I really enjoyed that.

Is there something you’re glad you brought to Apocalypse?

I think connecting it to a real spiritual idea; that aspect was interesting to me. There were a few things that we came up with dialogue-wise in the whole thing that I was really glad about, but I can’t say any of those without spoiling things! We wanted some things that were unexpected.

Days Of Future Past was huge in terms of scale and success. What can we expect from Apocalypse?

What we can expect is the idea that family is still a huge thing. It’s a huge scale; this is the biggest one yet. And real conflicts for them, for one of the first times. They’re fighting against each other, not only for the survival of the world, but of what the X-Men are.

And are you now going to pitch Apocalypse Vs. Dracula?