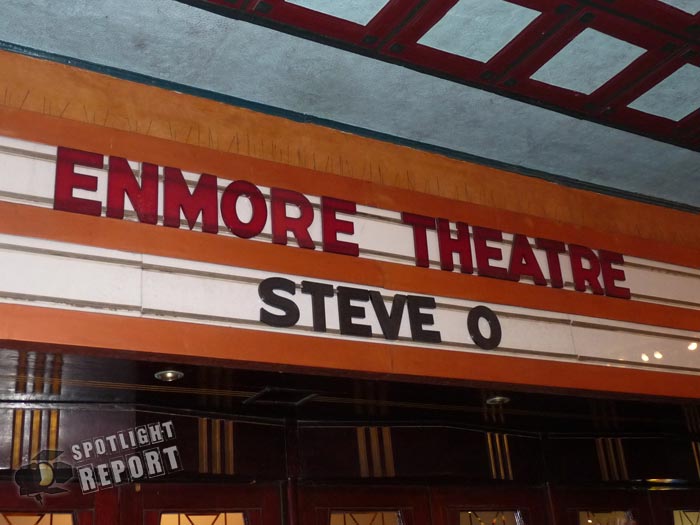 Last night, Saturday May 21st, Jackass star Steve-O performed at the Enmore Theatre in Sydney, his “The entirely too much information tour” in Australia.

The show was divided in two parts. The first part was the funniest stand-up comedy ever! The funnyman stood in front of the audience with just jeans, white shirt and his cap facing many drunkards in the crowd during the entire show. A versatile performer that he is, Steve-O was able to deal with the situation and still deliver a great performance. The jokes were sometimes directed at the unruly crowd.

He told the audience stories about his new life, the vegan lifestyle and how he is proud to be sober and clean of drugs for the last 3 years. He also dwell on the saying “How crooked is crooked” and told the funniest stories about him. This includes his sexual life with anecdotes about his encounters with different girls and stories with his Jackass and Wildboyz’s friend Chris Pontius (a.k.a Party boy).  Steve-O also gave some inside stories about Jackass, like the story behind the whale shark! This was just hilarious! Now everyone who was part of the show can watch Jackass with different eyes… Also, at the end of this part Steve-O promoted his new book “Professional idiot: a memoir“, a must buy for every fan! Moreover, he also joked about his attempt to be a rapper with no luck.

The second part of the show was what people expected just AMAZING STUNTS! Steve-O showed how he used to get free drinks in bars just doing a great performance, drinking from a glass without using his arms. Later on, he did what he does better… hurt himself! He put lemon in his eyes, cut his tongue with glass while covering his face,  his chest in blood and to finish this, he did 2 different acts putting himself on fire like a truly human match!

Everyone at the venue enjoyed the entire show responding very well to Steve-O‘s stories and stunts, applauding every moment and laughing like crazy. He even promised to take a picture with everyone and to sign Jackass’ stuff that fans might have at the end of the show. He ended up signing autographs at the Enmore’s lobby for more than 2 hours to doing it for every single fan..That’s the spirit!

Here check some postcards of the venue below:

An amazing venue! If you missed this one out because you can still catch him in Brisbane, his last stop for his show in Australia. But don’t despair if you can’t get there, we are pretty sure that he will have a comeback here in Oz  with a new stunning show!

Also, here you can check out our interview with Steve-O and his dinner with fans in Sydney.