Seth, who plays the voice of  B.O.B. walked the “Blue Carpet” at the premiere in Sydney alongside Conrad Vernon who is one of the directors of the film, better known as the voice of ” the gingerbread man” in Shrek.

Monsters Vs. Aliens is the debut of  Dreamworks animation in “Tru3D” and will be out on cinemas and IMAX on April 2. 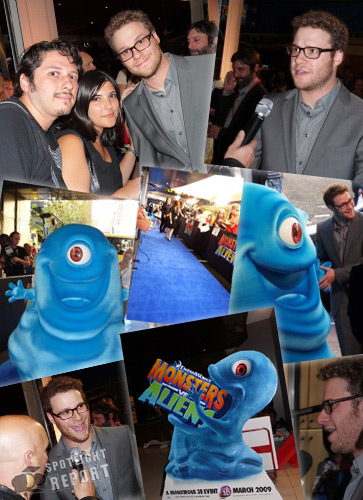 is looking more svelte and in-shape, because he has been preparing himself to play on his new film “The Green Hornet”, which will be directed by Michel Gondry and has a tentative release date of June 25, 2010.

Rogen, was very friendly with the people, taking pictures and signed autographs for the fans at the venue.He also did lot of interviews for radio and tv.

We had the luck to score some movie passes to see the film at the premiere, where the Director and Rogen gave a funny introduction to the people who was invited to see the movie, they said that the audience must to say “oooohhh or ahhhhh” with every special effects because this is the first True-3D movie and it took 3 years to be ready.  Seth also comment that the audience have to wear the 3D glasses, because he made a petition to the cinema that the 3D glasses must look exactly as his glasses..So “we have to wear it to look as nerd as he is”, he said laughing.

Check the Monster vs Aliens trailer below:

For more information about the film visit the oficial website here