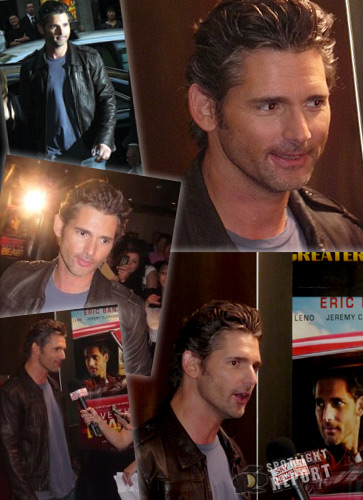 Lights, camera , action!!! the shiny red carpet neatly rolled along the Greater Union complex at George Street with a large crowd gathered to welcome one of Australia’s most talented exports!! the man of the hour ERIC BANA! dressed in a simple outfit black leather jacket, blue shirt and blue denim pants the Hollywood heart-throb who found fame in such films as Troy acting along side Brad Pitt and Orlando Bloom was well received by hundreds of adoring fans who waited long hours and were well rewarded as Bana signed autographs and posed for photos, amongst the people invited to the premier were a few local celebrities the likes of the cast of fat pizza Tahir Bilgic and Paul Nakad, underbelly actor Guyton Grantley and musicians Tex Perkins and Ben Guillies (Silverchair).

The event was followed by an after party held at the LINCOLN HOTEL in Kings Cross!

About the movie:
Love The Beast is a movie where Eric Bana cast himself in his perfect role exploring the meaning of a 25-year-long relationship with his first car,”The Beast” and ultimately the importance of the bonds the from through a common passion. Filmed over 2 years, we follow Eric on a unexpectedlly emotional journey from inside the race car to the surreal world of the red carpet as Eric considers the importance of family, friends and what it means to keep your dreams alive. LOVE THE BEAST is as full of heart and the defining moments in a life as it is about driving fast…really fast!!!

The personal and social pressures mount up in the face of re building a car that means so much to him. Along the way

Eric seeks guidance and wisdom from not only the inner sanctum of his 3 life long friends but also Jay Leno, Jeremy Clarkson, and Dr.Phil

For further information visit the official site of the film here.