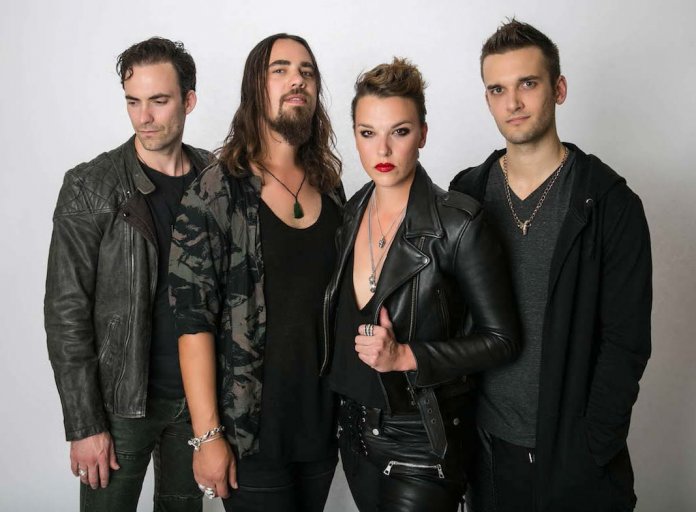 Halestorm took the stage to almost deafening screams of excitement. Opening with Do Not Disturb, the band showed that they meant business. Lzzy Hale made her rock star presence felt for every second that she was on stage. Fans screamed along to every song, amazing Lzzy by knowing their entire back catalogue. Crowd favorites included Love Bites, Freak like Me, Mz. Hyde and Uncomfortable, all sending the crowd wild.

Not one to hide in the background, drummer (and Lzzy’s younger brother) Arejay Hale ramped the crowd up with his crazy antics. The Bass and Drum solo was a good reminder that Halestorm is made up of more talent than just Lzzy.

A personal highlight for me was when the band launched into Apocalyptic (despite Lzzy only being in eight inch heels). A second was the song Chemicals – a favourite of mine.

Sadly, all things must end; even Halestorm’s Sydney show. As the night came to a close, the band did not waste much time with the truly overdone “encore”, returning quickly to the stage to launch into more songs.

Hale showed her softer side when she stepped out alone to sing a medley of Rock Show, White Dress, Dear Daughter and Adele’s Someone Like You for the eager crowd. Grabbing shots, Lzzy made a toast to Black Stone Cherry – who had to pull out of the tour for a family emergency – and to the Halestorm family before inevitable launching into yet another fan favourite: Here’s to Us.

For their final song, Halestorm delivered an extended version of I Miss the Misery before leaving the ramped up crowd wanting more. While Halestorm are yet to see the success in Australia that they have in their homeland it is clear that big things are headed their way. In the years since their first visit, the band has amassed a strong following. With the help of their dedicated followers, Halestorm is set to soon achieve world domination.