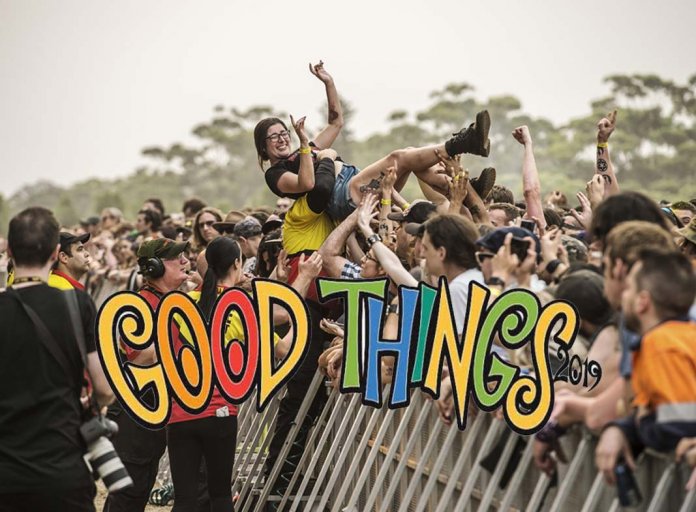 On Saturday 7 December, Centennial Parklands was the new grounds that hosted Sydney’s second Good Things festival, and it didn’t come as a surprise that, like last year – it was in fact a good time. The crowds flourished like a black and rainbow sea with a mix of resort shirts and band tee’s eagerly making their way through the field for the kilometre walk to the entry, to listen to the musical stylings of some really nostalgic bands like bands like Simple Plan, Reel Big Fish, The Butterfly Effect, Thy Art Is Murder and of course healiners Parkway Drive and A Day To Remember. 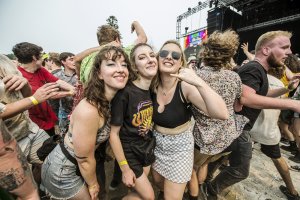 Having done many festivals in my time one thing that is a major winner or mood killer is the vibe of the location. This place felt a lot nicer and calme and was nowhere near as dusty as Parramatta Park, and suprisingly there wasn’t too much of a police presence compared either. The place was buzzing and we were ready to mosh!

Competition winners and locals Teeth started with an excellent set which was the perfect opening for the day! For a local act they managed to pull a very big and supportive crowd for a smaller stage while they plowed through some of their tracks like Rapture, Relinquishing Hole and Splinter and that was very impressive and heart warming to see.

Over on the main stage internet queen and self proclaimed alien; Poppy had her own sermon with her disciples melting in her hands, presenting her pastel electro mashes while airily wandering around the stage. The chilled vibes really set a tone for the beginning of the day. 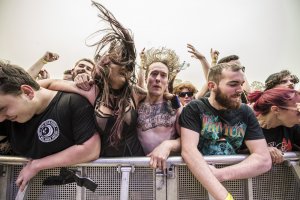 Reel Big Fish were as colourful and fun as ever – decked out in coloured suits and Hawaiian shirts. The Ska vibes crashed through the crowds and giving such energy, presenting some hits and some tracks of their latest release which was told to the crowd as “LIFE SUCKS …wait for it…LETS DANCE!” along with some classics and dance they did. It was just one big party. They didn’t piss us off in You Got Me Pissed Off, Everything Sucks didn’t suck, and I’m sure some fans wish they really were their girlfriends! Reel Big Fish seem to have this way of taking any storm cloud that you might be feeling and gives you a sense of carefree. It’s always a pleasure to see them play, especially when they end the set with their cover of 80’s classic Take On Me. It was quite entertaining and inspiring alone to see so many people hit that high note. 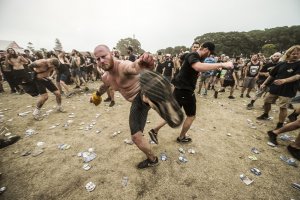 One of the biggest novelties judging by the crowd was for Australian Sweethearts The Veronicas, which when they were first announced it was one giant meme. No lies to be told, but my 12 year old self could not contain the excitement to hear those anthems of my teenage years like 4Eva, Everything I’m Not, Hook Me Up and even a Blink -182 cover of I Miss You. It must have also been a bit overwhelming for the twins as they came out saying “How are we going today Melbourne.. I mean Sydney!!!” That was not all, Bert Mackaken joined the twins onstage for a performance of The Used’s hit The Taste of Ink, which gave one of the twins to show off her screams which “Bert taught her how to do” I came, I saw, I got the shirt – “I survived the wall of death 2019” which as the internet gods predicted, inevitably occurred during the final track Untouched.

Running across to the other stages to catch the end of The Butterfly Effect and they seem to be as excited and pumped to be back at it again as we are! Dance Gavin Dance were a tight set but unfortunately left crowds a bit unsatisfied when the set ended without Uneasy Hearts Weigh The Most being played.

Back over to the main stage Trivium show us why they are a band to go and see time and time again. Opening track The Sin and Sentence got us taking the ride to windmill central! Heads were banging throughout the whole set. Highlights included Down From The Sky and The Heart From Your Hate. Trivium are just a really good band live and there is nothing else to say on that topic. If you didn’t see them at Good Things you really missed out. 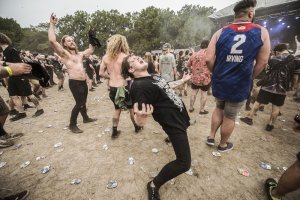 Enter Shikari have always been known for their energetic, chaotic live shows. And they bring it every time. Destbalise, SSSSnakepit, Rabble Rowser, The Last Garrison were just a few hits that had the whole crowd singing along. Sorry, You’re Not A Winner must be one of those songs that the band must be sick of by now, but the excitement when those claps come in gets the fans everytime.

We all know Ronnie Radke’s ego gets the best of him of times and this Falling in Reverse gig was no exception.This included verbally abusing the sound guys because there were some technical difficulties, but soon to be followed by an apology. All of that aside though, after seeing Radke in most of his projects and having seen FIR multiple times- this performance was lacklustre. Radke is a natural born performer, who has such a powerful voice but I didn’t see the passion that usually exuberates him.

After getting an earlier than planned dinner, it lined up perfectly to see Thy Art Is Murder on the corresponding stage! There wasn’t a circle of death as big as Download but the crowd were, and are always ready for CJ McMahon’s insane screams and overuse of the C -word! The Purest Strain of Hate, Holy War and Reign of Darkness were highlights from the set. 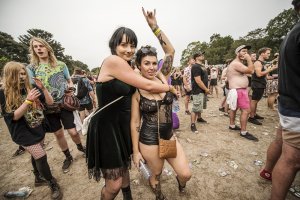 Heading back over to the main stage and the sun was getting ready to set, but Florida heavy music veterans made our day, A Day To Remember. Downfall of Us All started the set and the whole crowd was singing along to the melody, one of the awesome things about ADTR’s live shows is that there is also a high level of crowd interaction which comes naturally from frontman Jeremy McKinnon, and gang vocals are an awesome way to do that! So many nostalgic tracks were played like All I Want, Sticks and Bricks, If It Means A Lot To You and 2nd Sucks. Confetti showered the crowd during Have Faith In Me and that felt like a very special moment. Mixing the old with the new we got to hear some more recent tracks like Degenerates, Rescue Me and  Resentment. ADTR’s quality of show and setlist never fails to disappoint and that’s why they’re a band I’ve adored and have seen play over ten times.

Finally headliners Parkway Drive made their way to the stage and the punters went absolutely wild moshing, and crowd surfing throughout the set.  Seeing Parkway live is definitely an experience everyone should have the chance to take. They pummeled through their set that included hits like Carrion, Vice Grip, Idols and Anchors with pyrotechnics and confetti showering the crowd. In all the years they have been active I’ve never been to a disappointing show, and what a way to end the festival! Crushed and Bottom Feeder were the encore songs and Parkway in fact Crushed it!

Until next time, Good Things festival! See you next year!

…and stay tuned for our full photo-gallery of the day!