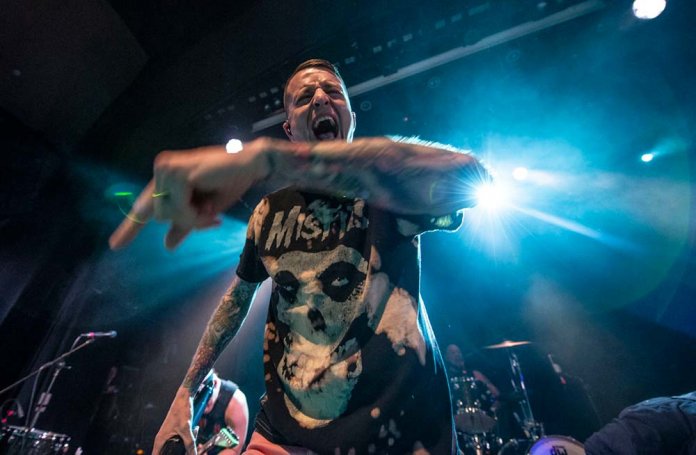 Atreyu took absolute control of Sydney’s Manning Bar on 27th February 2020. It’s been way too long since they last brought their impressive live show down to us, but this wait has only increased excitement. They took to the stage to loud roars from eager fans. Manning Bar was perhaps too small to contain their energetic show, but its size made for an impressive mosh, with almost every inch of the venue becoming a mosh pit. Right from their first seconds on stage, Atreyu put on a show of epic proportions. Alex Varkatzas was every bit the perfect front man, hyping the crowd up, thanking the crowd for their support, and putting on a comedy routine all night. 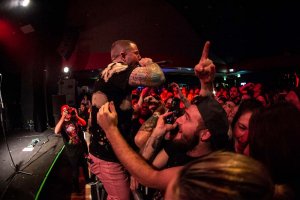 One of the things Atreyu does so well is crowd engagement. They carefully select the moments to turn the mic to the crowd and don’t overuse audience involvement – something many bands struggle with. The crowd impressed Singer/Drummer Brandon early on with eager and enthusiastic responses to his every vocal cue, including singing back the lyrics of a quick cover of Whitney Houston’s I Wanna Dance with Somebody without missing a beat. But the band impressed us right back! Brandon’s melodious voice is like no other, and it honestly makes me melt! And it complements the rest of the band so damn well! Their unique blend of dark and light, heavy and melodic really pulls me in every time. I found myself forgetting to sing along at times, so lost in the way all the elements came together, and the fact that they sound just as polished as their records. I cannot find a single fault in their performance except that it ended.

Our personal highlights include songs “The Right Side of the Bed”, “Bleeding Mascara”, “The Crimson” and of course “Blow”, with its energy, anthemic sound and crowd participation. It is impossible to determine what the crowd favourite of the night was – it felt like every single song was a favourite – as the setlist was perfectly tailored to the audience. Other notable moments include their renditions of Bon Jovi’s “You Give Love a Bad Name” and Rick Astley’s “Never Gonna Give You Up”. It wasn’t until I saw the crowd that I remembered how intense and powerful Two Become One can be live. The entire floor was moving, and everyone joined in when Alex encouraged the crowd to make a “spooky ghost sound” in order to sing along during an instrumental moment.

Being at an Atreyu show feels like you’re hanging out with friends – the coolest kids you know – and you never want the night to end because you’re having such a good time. It was a night of great vibes, high energy and good fun. With Grade A banter from each of the band members, I found myself wondering whether I’d forgotten just how fantastic their shows were, or whether they’d stepped it up to a whole new level. A brilliant night! I could go on forever, but I’ll just say this: if you get a chance to catch them on this tour DO NOT PASS IT UP!