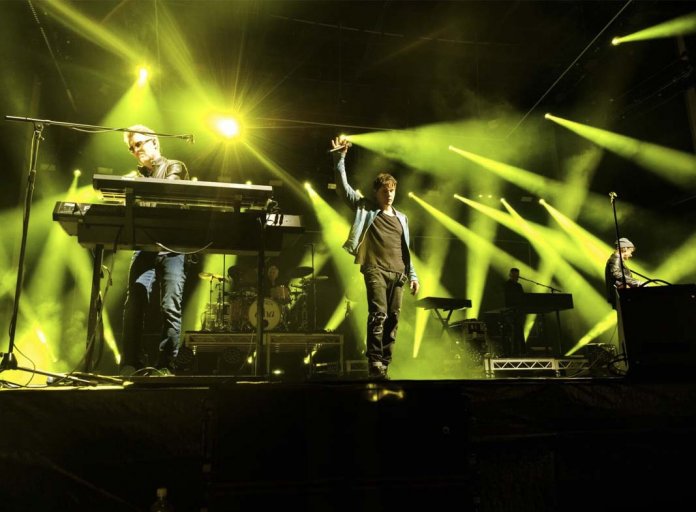 “80’s laden synth-pop amongst the vineyards!”

34 years in the making, Norwegian trio a-ha finally made it back to Australian shores (and for the first time New Zealand) to celebrate the 35th anniversary of their debut album ‘Hunting High and Low’ – having started their live career in Perth in 1986. Also appearing were a couple of other 80’s legends in Rick Astley and Pseudo Echo as well as 80’s inspired group I Know Leopard.

With Summer coming to a close, the afternoon kicked off with I Know Leopard who’s inspiration is clearly worn on their sleeves with 80’s artists like John Lennon, Bryan Ferry and The Cure literally dripping off each song. Those in the crowd that made the 4:30pm start were appreciative of what these Sydneysiders had to offer.

After a short break with DJ Grand Master Baitz keeping the crowd upbeat with 80’s hits from one-hit wonders to well known artists, it was time for Pseudo Echo to showcase their back catalogue of songs with a few surprises for good measure. Whilst the band has gone through some line up changes they have kept the ‘keytar’ front and centre. Looking every inch the rock star, frontman Brian Canham mesmerised the crowd with hits ‘Living In a Dream’, ‘Love An Adventure’, ‘Don’t Go’ and a rousing version of ‘Nutbush City Limits’. During their version of Lipps, Inc ‘Funky Town’ they paid homage to another Australian icon AC/DC with three members doing the Angus Young schoolboy shuffle across the stage and segueing into Deep Purple’s Black Night.

Rick Astley has certainly grown out of the Stock Aitken Waterman shadow to stand on his own two feet. Retiring from the music industry in the mid 1990’s after switching to gospel inspired music, Astley has embraced his past with open arms (and a certain English cheekiness) and had the crowd in the palm of his hands. With songs ‘Together Forever’, ‘Angels By My Side’, ‘Keep Singing’, ‘She Wants to Dance with Me’ and ‘Try’. Towards the end of his time on stage he had the crowd on its feet retelling how an Aussie band accepted him whilst on tour with them….he named them as INXS before performing an electrifying version of ‘New Sensation’ then closed his set with ‘Never Gonna Give You Up’ – the song that everyone was waiting for.

For a band that has not set foot on Australian soil for over three decades, a-ha took quite a risk to firstly, perform their biggest hit ‘Take On Me’ as the opening song (which has previously been an encore staple) and then secondly, perform their debut album ‘Hunting High and Low’ in full. That opening song certainly had the crowd in raptures, with singer Morten Harket showing no signs losing his five octave ‘operatic’ range. During the title track, ‘Hunting High and Low’, Morten had the crowd singing along to the chorus. Each track from ‘Hunting’ was performed as per the recordings except for ‘Dream Myself Alive’ which they went back to their original demo version. The crowd again were up and singing along to ‘Sun Always Shines on TV’ a song that was sadly overshadowed by its predecessor ‘Take On Me’.

The bands trusted spokesman and keyboardist, Mags (Magne Furuholmen) engaged with the crowd during the breaks with guitarist Pål Waaktaar-Savoy happy to be in the background simply adding sonic texture bar some guitar riffs during certain songs such as ‘Sycamore Leaves’ and ‘I’ve Been Losing You’ where he got to shine. The second half of the set was a mix of material that didn’t venture past their next three studio albums, ‘Scoundrel Days’, ‘Stay on These Roads’ and ‘East of the Sun, West of the Moon’ The cover of Carol Kings ‘Crying in the Rain’ had a few technical glitches but Morten and Pål managed to reel them in and harmonise really well. The group finished off with their James Bond theme ‘Living Daylights’ with another crowd sing-along.

Fans of the group are now hoping that it won’t be another three decades until they return again.