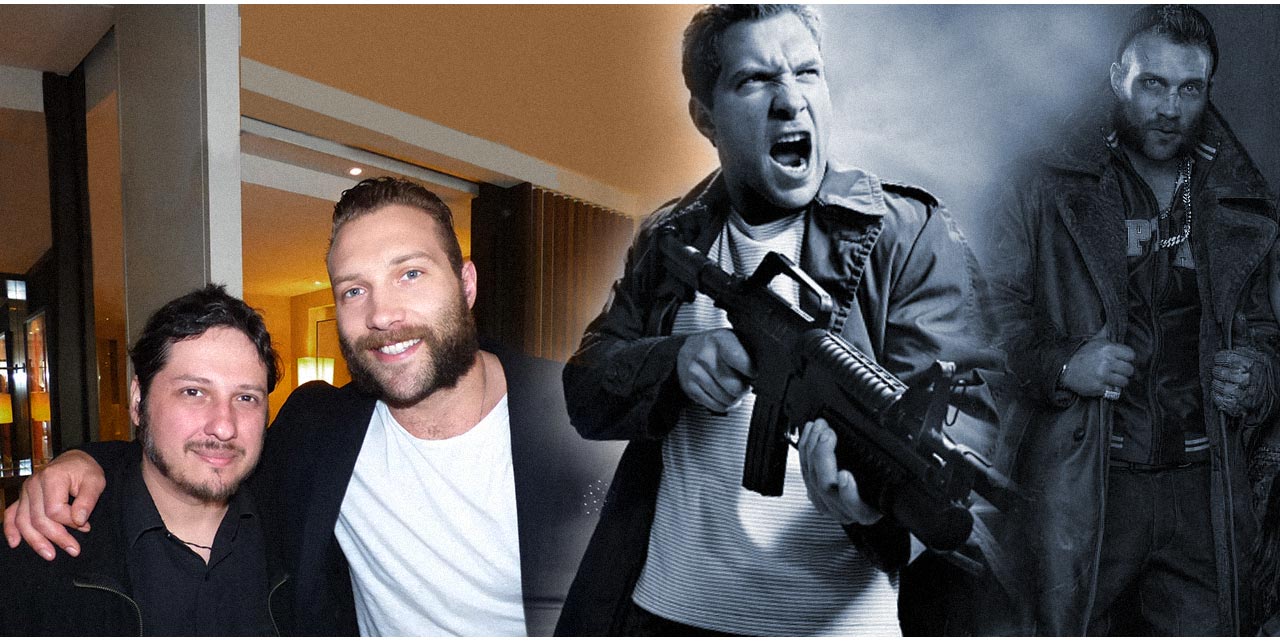 After many years of hard work, Australian actor Jai Courtney has become one of the hottest names in the Hollywood scene, after performing in huge blockbusters alongside the likes of Bruce Willis in the latest Die Hard film and Tom Cruise in Jack Reacher, as well as is some important Australian productions including Angelina Jolie’s Unbroken, Russell Crowe‘s The Water Diviner and Felony.

Recently cast to play Australian villain Captain Boomerang in David Ayer‘s Suicide Squad, Mr. Courtney came back to his hometown in Sydney alongside Arnold Schwarzenegger, to promote the latest Terminator film ‘Terminator Genisys’, in which the Aussie star plays the iconic role of John Connor’s father, Kyle Reese making this film one of the biggest challenges of his career so far.

Thanks to Paramount Pictures, we had the chance to sit down with Jai for very intimate and relaxed roundtable interview, in order to find out more about his Terminator experience; but that’s not all, because our spotlight journalist even managed to get some EXCLUSIVE comments regarding Courtney‘s Captain Boomerang and a small hint at Jared Leto‘s Joker.

SR: Speaking of Terminator, you are playing such an iconic character like Kyle Reese. I wonder how the Terminator process and if you had any concerns about it.

Jai: Yeah, I think when I heard they were making another Terminator film there was a – you know, an element of caution – that I approached it with. Not like full-blown apprehension, but just, you know, you just want to see something like this done well. And it is a little delicate. I think we know the things that come along with rehashing a franchise that’s had so much success, and then perhaps not, as well, you know? I think it’s what’s dipped in what… more people are loyal to the early films than perhaps the most recent two. And, you know, coming in to make the fifth installment of something so iconic and successful. You want to see it done properly.

I was a fan of T2, mainly as a kid. It was the one that was around when I was around; and, yeah, so just kind of approaching that, you kind of want of know that they’re making it for the right reasons. And I think that any of my anxiety was put to rest when I got to read the script and saw what they wanted to do with it, and… I think it’s a really intelligent approach, you know? The threats and the element of danger that were around when the first film was made were, you know… It was the Cold War… It was the Russians, kind of thing. And I think now, where technology’s at, and how much we’re letting it into our lives and letting it kind of control us, it’s allowed them to explore that idea a lot. And, so, yeah I was really intrigued by the concept and saw great potential for the direction they wanted to take things in. That was kind of my introduction to it. As for playing a sort of iconic role… You know, I’d sort of toyed with that concept before when I’d played the Die Hard movie and stepping into something that is known. And look, for me personally, I don’t put too much weight on the expectation of what’s been done before me, in that sense. There wasn’t an immense pressure to copy the performance of Michael Biehn of the performance of the first film. I think you take the given circumstances of the character and look at it in context with the script that you’re working with, at that time.. So, while there are some elements that are fundamentally the same: he’s a soldier in that future resistance and gets sent back to save Sarah. And once he’s there, everything’s changed; and there was plenty of room for me to play in it and make that character my own.

SR: You’ve been working on a lot of huge projects like Die Hard and Jack Reacher with Christopher McQuarrie behind the camera. Your career really exploded from one year to another, and you even had time for some local Australian films like the excellent Felony with Joel Edgerton; and I personally loved seen you playing a more dramatic role. Now you joined the Terminator franchise, and since Suicide Squad. What’s the journey been like for you?

Jai: It’s been crazy. It’s a funny thing, you know? It’s bizarrely normal. It’s funny how quickly you get used to things. And look, I’ve had some tremendous opportunities and worked with some fantastic people – some real heroes of mine in the industry. And that never gets old. It’s wonderful to work with people who you admire so much. But, at the end of the day, there’s a job to do; and, I think it’s just part of being a professional to just kind of get on with that. And I don’t place too much emphasis around who it is you’re working opposite. You know, you are in the same kind of profession. They’re an actor, they’re a colleague, you know? They’re a team mate, They’re all there to achieve a sort of common goal. So it’s never about keeping that person on a pedestal, in a sense, you know? There’s always respect paid to someone who’s been in the industry a lot longer than you have or something like that. But, yeah – it’s become surprisingly normal relatively quick. I do remember feeling pretty freaked out when I got to the set of Jack Reacher and meeting Tom Cruise for the first time. ‘Cause that was vastly different to any encounter I’d ever had; but, I think that sort of desensitized me in a sense. After that, it got a lot easier. It’s cool, man. It’s fun. It’s always a novelty, but, uh, these people are just human. And it’s easier to just get on with the job and have fun with them.

“…I wasn’t a comic book kid. I wasn’t familiar with the DC universe…”

SR: I’m so glad to know Arnold is human.

SR: I have to ask you about Suicide Squad. I know that you mightn’t be able to talk much about it, but how do you feel about and how did you get the part of Captain Boomerang? Jai: It’s really great, man. I’m really excited about it. The vibe on set’s fantastic. We’ve really found a sort of a family atmosphere out there. The cast are fantastic. And I’m working with some wonderful actors and David Ayer’s someone who… I mean, he was the real draw card for me. I hadn’t read a script at all when I signed on. We’d met on a couple of occasions and we’d spoken. And, to be honest, when he told me that the role of Captain Boomerang was what he was thinking, I kind of cringed. ‘Cause I wasn’t a comic book kid. I wasn’t familiar with the DC universe and the history of that’. So I knew nothing about it. And I was, like, ‘Oh, god, Captain Boomerang…Really?…I really don’t know how Australians will react to this.’ (laughs)

And It’s funny, ‘cause something like that you want to do right. And it’s been interesting finding the balance. But he’s the perfect guy to have on your side, because you look at some of the comic books and some of the old sixties stuff is so hammy, you know, and kind of camp. But, get a guy like David Ayer at the helm of a thing like this and it really gets kind of dark and gritty, and, you know, awesome. And he’s a stickler for authenticity. So I think what we’re going to create is going to be really, really cool.

SR: Just to finish, any comment on Leto’s take on the Joker?