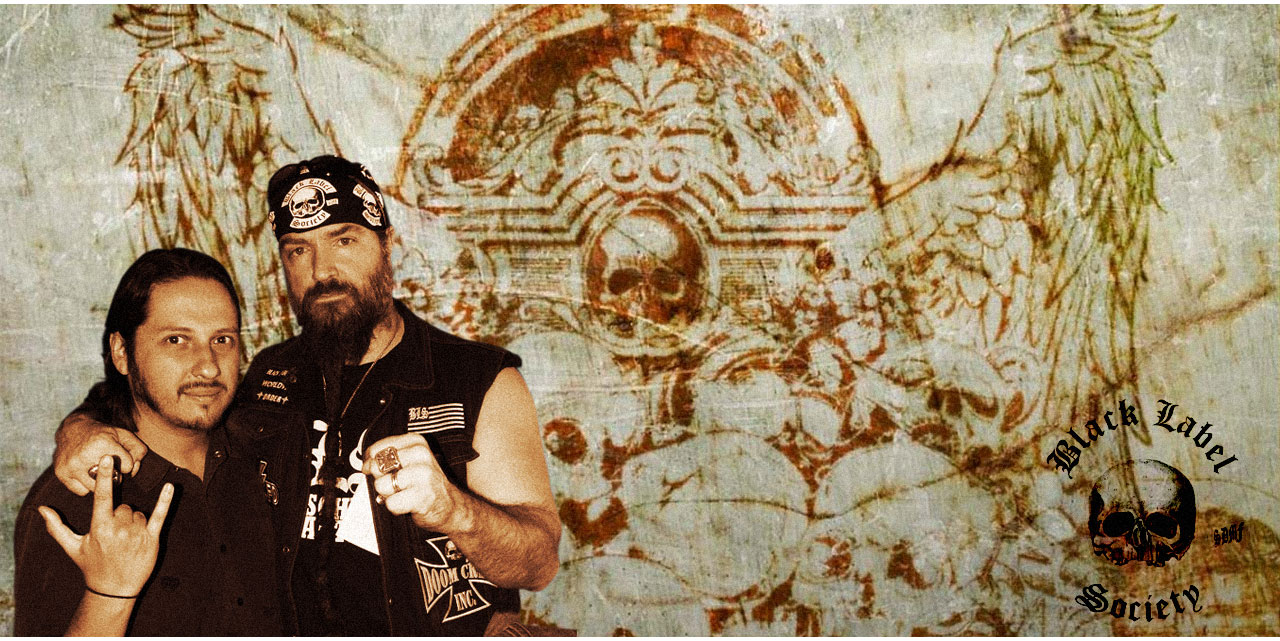 Hard Rockin’ Guitar Icon Zakk Wylde and his Black Label Society are about to release their ninth album, Catacombs of the Black Vatican , and it proves they’re still as heavy as ever. We had a chat with the bearded axeman about the new album and other future plans.

SR. Speaking about your new album. What makes Catacombs of the Black Vatican different from previous releases?

ZW. The whole thing was pretty much done the same way as all the previous Black Label albums, so there aren’t many differences. We just sit down and start with the Riffs, and from the Riffs you’ll get inspired to sing.

I usually write songs from beginning to end, I don’t write bits and pieces. So for me when I start with a Riff, I get fueled up to do something cool that can work, or to make my own version of something that I heard and really like. The key is to find something that inspires you.

Catacombs was written just after we got off the road playing the Gigantour with Megadeth and Hell Yeah. We sat down for 25 days to write the album, so every day I decided to get a couple of Valhalla Java’s (Zakk’s own hyper-caffeinated brand of coffee), go down to the garage, plug into my Marshall and play around to start writing some riffs. I probably had about 12 songs by the time the guys came down and then we recorded a bunch of stuff.

Chad (Szeliga), would just sit next to me playing air drums on his lap, and from there we just started to put all the parts together. Then we started jamming and next thing you know we liked it. So we recorded the tune after playing it just once, which was really cool, and then we moved to the next one, as simple as that.

SR.  One thing that immediately grabbed our attention was the name of the album. I wonder if there is any background story behind it.

ZW. I think nobody asked me that one before. You know in catholic religion the Vatican is where all goes down, it’s like the ground control. So I call the studio The Vatican, and it’s the Black Vatican, because we are Black Label Society and I actually painted the whole studio black. So it’s our big black house and the catacombs would be the songs, so that’s the genius of it (Laughs).

“…I call the studio The Vatican, and it’s the Black Vatican, because we are Black Label Society…”

SR. Catacombs includes a couple of very emotional tracks like “Scars” and “Angel of Mercy”. However, the second song “My Dying Time” sounds like brand new territory for you guys. What can you tell us about the variety in the album?

ZW. I think it is because we are not enclosed in one style only. I personally love everything from Elton John, The Eagles to Neil Young, Bob Seger and The Omens. I also love to listen to Sabbath, the Stones and everything else. In my writing I obviously draw inspiration from all my influences. So, that’s where it’s all coming from, that’s the pond I’m drinking from. You grow up loving certain artists and listening to their music, so at the end your music is a reflection of you.

SR. What triggered the decision of making “Dark Side of the Sun” and “Blind Man”, the bonus tracks for the album?

ZW. Originally we were to put 15 songs on the record, but they needed all these tracks for different territories, because we have the heavy stuff and the more melodic ones, and that’s how we pick the songs to go as bonus. Despite of that, I must say I’m very proud of all 15 tunes.

SR. Following up on that, what’s your favourite song of this particular album?

SR. Moving to a more personal area. Who would you say was your guitar mentor?

ZW. It’s not only one, and they still are my mentors and inspiration. I like to listen to John McLaughlin, Frank Marino, Randy Rhoads, Al Di Meola, Tony Iommi, Jimmy Page, Albert Lee and I could go forever, but those ones are on the top of my list.

SR. Many fans were shocked when the news came out about rhythm guitarist Nick Catanese leaving the band after so many years to work on his own stuff. How hard was that for you?

ZW. It’s all cool between us. Nick has been around with us for 17 years, so when he approached us to tell us that he wanted to pursue his own thing, we all supported him straight away. We love him man, he is a brother for us, so just because he is not anymore in the band doesn’t mean he is not one of us and we wouldn’t love him anymore.

“…when Nick (Catanese) broke the news to us, we told him that we all wanted him to succeed.  He will always have a home here, he will always be a Black Label brother.”

In Black Label, we don’t get into arguments, screaming matches or pissing matches, we don’t have that – period. So, when Nick broke the news to us, we told him that we all wanted him to succeed.  He will always have a home here, he will always be a Black Label brother.

SR. Dario Lorina is now playing with you guys after Nick’s departure. What does he bring to the band? ZW. The same thing with Nick, which is that he knows how to play his instrument perfectly. For example, when I’m playing the piano he has to be doing the solos, so to fill that you need something else, you cannot just be a rhythm guitar player, you have to be able to stand out. During certain solos, Dario will double some parts with me. He also has a new record coming out now and it’s killer, because he can shred.

SR. When will Australian fans have the chance to experience your  “An Evening with Zakk Wylde” acoustic tour?

ZW. Maybe we will take it over to Europe and from there on who knows, but right now we are starting our Black Label boot camp, as the new album is due to come out, so we start our rehearsals soon and we’ll be rolling in before you know it. It will be a world tour, so we will be everywhere! SR. We heard about the news about your stolen guitar? Any update on that?

ZW. She is still out there, so hopefully she will find her way to a pawn shop and somebody will get it and I’ll have it back. I’m very positive on that.

SR. We really need to ask you this: Not long ago there was a rumour regarding a potential Pantera reunion in which you were set to fill in for Dimebag. Was that rumour true?

ZW. Well, first of all Dimebag is irreplaceable, there was, is and always will be just one Dimebag Darrell. I would be totally honoured to do that. If the Pantera fellas really wanted me to do it, of course I would love to honour the memory of Dimebag. I love Dime, I miss him every day, so if I can pay tribute to him by playing with the Pantera guys of course I’d do that, trying to play the best I can in his honour.

“I love Dime, I miss him every day, so if I can pay tribute to him by playing with the Pantera guys of course I’d do that…”

SR. Does that mean the rumour was true?

ZW. It’s true man. They were talking about doing it. I think the rumours, which I’m not really aware of, are out there because somebody asked Vinny Paul about a reunion during a radio interview. He said that if they’d  ever do that, it would be with Zakk playing guitar or something like that, so that’s where all those rumours started from. They’re still just rumours and nothing concrete. There is no truth to it really happening, because the day it would happen, you and everyone else would know about it.

SR. What would you say is your favourite show you’ve ever played?

ZW. My first arena show with Ozzy in Pensacola, Florida was really cool, and obviously the Moscow peace festival as well. It was unreal to play in front of so many people. The first time I played Madison Square Garden with Ozzy as well.

SR. You are still close friends with Ozzy. Would you consider going back on tour with Ozzy if you get the chance?

ZW. Yeah, why not? I’m just one phone call away from him. I’m good buddies with Gus G as well, and he is an amazing guitar player and he kills it with Ozzy, it’s his gig now. However, if he decides to do Firewind full time and the “boss” (Ozzy) calls me to do some jamming I’d be totally in.

SR. Have you seen Ozzy recently? ZW. Last time I saw “Ozz”, he was doing a Sabbath show and the band was just amazing. We went out after with Mom (Sharon), “Ozz”, myself and my wife Barbaranne, and our two oldest kids, because Ozzy is their godfather. We were talking and laughing the whole time talking about old drunken stories and stuff like that.

SR. Time for some classic questions we always ask to our guests. Can you share with us any funny fan request you’ve got?

ZW. Two girls came on the bus one day, they thought I was hot and stuff like that and they  said to me “Do you know what we would do to you?” Turned out they wanted to put on a strap-on and f** me in the ass?!   I thought to myself “So that’s why I stay faithful to my wife, because I have hot girls wanting to F** me in the ass with a strap on dildo” (Laughs). I told them I’ll be passing on that one. This story is in my book by the way (Zakk released his tell-all book “Bringing Metal to the Children: The Complete Berzerker’s Guide to World Tour Domination” two years ago ).

SR. Do you have any potential tour dates for Australia?

ZW. Well, we start on April 8 with the release of the album. I only can recommend everyone to keep an eye on our website for tour updates.

SR. Just to finish. Any message for your Aussie fans?

ZW. Stay strong, keep wearing black, God bless all of you and hopefully we will be rolling in there soon enough with the Catacombs!

Catacombs of the Black Vatican Available in Australia from April 11, 2014
PRE-ORDER NOW!!!

Thanks to our friend JH of Bullet Proof for making this interview possible!