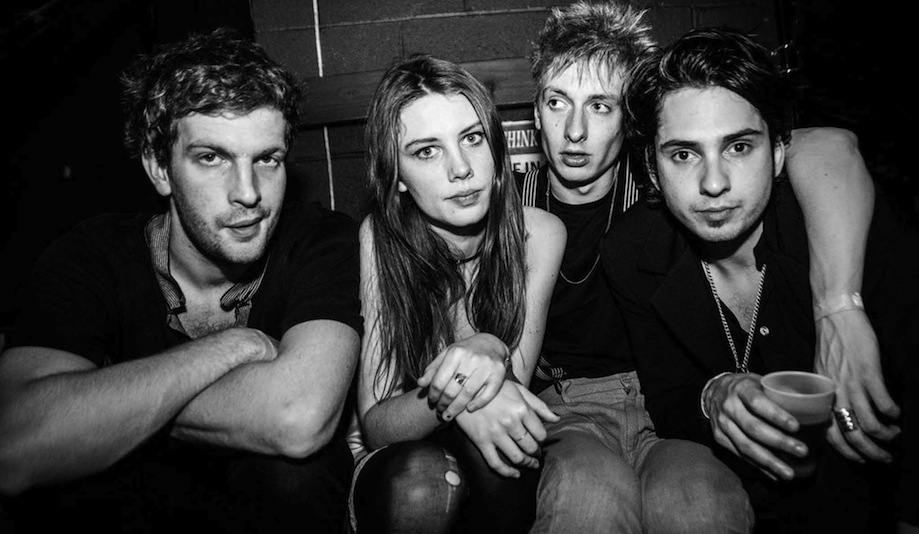 Wolf Alice have had a mammoth year, having been nominated for BBC Sound of 2015, Wolf Alice released EP ‘Creature Songs’ which grabbed the attention of music lovers and taste makers around the world. After hype continued to grow around the band, Wolf Alice has just released their highly anticipated debut album ‘Your Love Is Cool‘ which has received rave reviews with the NME labelling it “the debut of the decade so far”.

With an accolade of praise they remain quite humble as Spotlight Report caught up to Joff (guitars and vocals) about the sound of the record, their upcoming appearance at Splendour in the Grass and Australian music.

Something that immediately was interesting to me about this record was that I read in an interview that Ellie was saying that the album has no concepts and that it is just a collection of songs- yet, to me, it still feels like a whole body of work – how do you think you achieve this?

I think what she was saying is not that the album is not a case of you know that the album isn’t a cohesive sounding record if you know what I mean. I think she was more saying songs are more of a start to finish story but I mean I think there are things that do tie the record together. You know the fact that the four of us made it and we made it in a studio over a couple of month’s time. It’s more valid and it has that kind of glue that ties it all together.

It’s quite an eclectic sounding album – what are the different influences that have inspired these different sounds?

I mean all sorts of stuff. I mean we been listening to a lot of music other the past years and it is quite interesting really because when we were making the record and when we were looking for sounds, we didn’t really listen to a lot of music in the studio. You know we are big music heads and we listen to a lot of stuff but when it actually got down to making the record and sitting in the studio it wasn’t like we were listening to records and thinking this is good to use.

Was there a reason for that?

That probably works because your music can’t really be pigeonholed in anyway – was that something than you really strived to achieve or did it happen naturally?

We are four individuals who listen to a lot of music that are growing up in an internet generation and we have consumed a lot of different types of music kind of however and whenever we want so it is a varied record as a result and I didn’t think that anyone wanted to make a record that had a couple of singles and everything else was kind of like a carbon copy of those other singles that all sounded the same. So yes, I guess…I don’t know how much of a conscious decision it was but I’m fucking glad it ended up this way.

You guys worked with Mike Crossey on the production of this album what was it like to work in the studio with him?

Yeah, it was alright. He is kind of more of an engineer than he is a producer to be honest. He was quite good at getting performances out of you and he is a good motivator and he will push you to play the best that you can. It was interesting working with him.

Do you think your technique has changed much since the EPs? Yes, I think everyone has gotten better. I think its just natural since we are playing all the time and you kind of just getting better over time but we have just learnt along the way.

So the NME labeled your album as the “debut album of the decade” – I’m sure you guys are excited by that but are there elements of nervousness because I suppose there is a lot of pressure that can come from that?

I don’t know really. I think with things like that it is all positive so we are not too worried to be honest. We were pretty over the moon with that one, I think its more exciting and flattering that it is scary.

Also you guys are coming back to play Splendour in the Grass – what are you looking forward to about that?

To be honest I’m pretty happy just to come back to Oz. It is just such a nice country and everyone is chilled.

It’s a bit colder now, not like last time you were here for Falls though…

I don’t know about that, I think your idea of cold is probably going to be pretty nice for us. I think it’s probably going to be OK. One of the people who comes around with us in Australia put it really well. He said that with English people once you meet them they are not really your friends unless they can prove to you that they are not a threat or that they are not someone who is going to be a dick to them and Aussies are kind of the other way around. They work on the assumption that everyone is a friend until they are a dick to you. So that was a really nice way of putting it. I guess that is kind of true and he is an Aussie that has lived in the UK for a long time so yeah.

Anyone on the line up you are looking forward to seeing?

I don’t know if we will have much time to be honest. I’d love to see Blur again- they are fucking cool. I think they are playing on the same day as us. I’d like to see some Aussie bands but I’m not completely sure who is playing. I know Tame Impala are playing, right?

Yep. Some other good Aussie muso like Peking Duk are playing…

I have been told by a couple of people of Peking Duk. I might have to check them out.

You should check out The Rubens, they are a great Aussie band as well.

Yes, there is a lot of good music coming out Australia at the moment. A lot of fucking exciting bands.