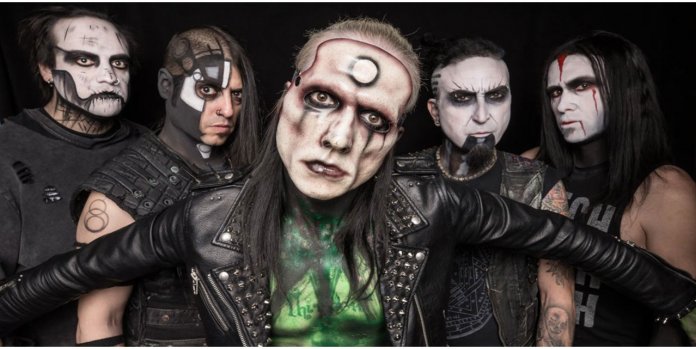 From beneath the crypt, Wednesday 13 is soon to release his next installment of the spooky soundtrack to our lives. Necrophaze is set to be released on the 27th Of September and this record will make you just want to party until you die. Before we are cursed with the release of the album, Wednesday 13 are touring the country supporting Static- X along side Dope.

Thanks to John Howarth from Nuclear Blast Records we got the chance to chat to Wednesday ahead of the tour!

SR:So your new album is coming out September 27 and you have said that Necrophaze is kind of about like your sleep paralysis, night terrors, and your own real life horrifying experiences. Are you looking forward to the launch of the album and what kind of made you want to write about this?

I mean, I guess the whole theme of the record, and whenever I explain this whole “Necrophaze” character concept record…. the character itself and the song was kind of loosely based on my night terrors and another story I kind of made out of it. But the other night terror paralysis fantasy was something I’ve kind of sort of had on my whole life but I didn’t really notice him until ten, eleven years ago… it was just really fucking with my world. And I think once I knew what they were, it became even worse. So yes,it’s my own little horror movie I deal with in my hands, but luckily, I haven’t encountered one of those in quite a while. Once I stopped drinking i kind of got happy and all my bad demons went away. It’s strange, I was I was fighting a fire inside of me somehow but I won. Hes probably just hanging out waiting to get me when I least expect it. [laughs]

The theme is that character Necrophaze and i’m excited to put a new record out, you know, have a theme behind it in this bag of tricks, that’s what this is. And this is the new version of Wednesday 13. I like to say it’s the perfect Frankenstein monster made over the years. I pieced this monster together and I don’t know if I had all the right parts to make it work and now I kind of feel like I’ve installed these abnormal parts together.

SR:You’ve said that with all your albums everything kind of starts with the title. So where did the title Necrophaze actually come from?

It always comes with a joke like or I say something as a come back to something like my first album, the title Songs of Death Dying and the Dead was from some review of one of my shows or something, or “Wednesday 13 whose subject matter deals with songs about death, dying and the dead” and I thought that was hilarious. Whether they were making fun of me or not, I don’t know, but I just named that the album title. Someone was asking, “Well, how many more songs are you gonna write about necrophelia?” I don’t know. I guess I’ve been going through this necrophaze a little longer than normal.

I wrote the word down and it looked cool and I started thinking more about it and then the story kind of created around that and then as well a friend of mine from the band Necrophagia, the guy got killed was a friend of mine who I communicated through a lot in the early days through like social media and stuff like in the very beginning, like Myspace and we were going to do a seven inch record together. He was a horror guy, it was more a death metal style and I thought it was this cool little nod to him as well and in that song Necrophaze I actually say his name. I thought that would be a cool little tribute to him as well.

SR:Going back to that humorous side of you with horror, you’ve got your BYOB -Bring Your Own Blood and Wish You Could Be Deader, and the like. Do you think the humor comes naturally with talking about such like, horrifying subjects?

I think singing about something like that, I think you have to have a sense of humour. You can’t sing songs about stuff like that seriously [laughs] it’s my character! Like someone will be “well what’s your favourite serial killer?” and i’m like woah… back up [laughs]. I don’t have a favourite serial killer, I don’t have a favourite war or anything like that I just find certain things disturbing. I happen to find certain serial killers more disturbing than the others. That’s why we have a song Zodiac – that was about that.

But the sense of humour thing- singing about these things you got to let people know that you’re not a complete basketcase and you got to show a smile while doing some of it. To show that it is part of a show.

SR: So with this album, you were working closer to home, which, you know, gave you more aspects of comfort, but how comforting really is working on songs about your nightmares?

It was kind of the one song where is really kind of focused on that. Every song on this record really is kind of like a different story. I like comparing it to Freakshow which was one of the first 80’s horror films I’d ever seen, I probably shouldn’t even have seen it at the age I was. But I just liked it, it was a different story, it was like five different stories. And I kind of like to think of our album as like a creep show like, every song is a different kind of story, but the meaning is similar. So yeah, that was a sign of sorts. The approach to this record was look at it that way.

So I didn’t really have to sing about anything personal on this record, which was really good. Whereas Condolences there’s a lot of personal things in there which is great I had to get those things out. But with this record, it really is just one letter telling a story as apposed to me telling my story. I think I have a lot more fun telling another story than to telling mine, I think that’s why this record has more of a fun vibe to it

You do have quite an extensive list of guests on the album as well like Alice Cooper, Ray Majora, Lexi from Children of Bodom and even Jeff Clayton from GG Allin. What was like your favorite interaction with those guys while making the album?

Everything I mean all the guests on the record, apart from Cristina Scabbia. That’s the only person that I do not know personally like, I’ve toured with her in the past and we have mutual friends and our management are friends with her. And when we were recording the record, you know, the idea of a female vocalist on the record came up and she’s first person I thought of, so she was the only guest that we’ve reached out to you without knowing like, I’ve known Alice for years. He’s taken Murderdolls on tour, he’s taken Wednesday 13 on tour and he’s a big supporter of what we do. Alexi, he’s been my friend for years. I guested it on a song on the Children of Bodom record and did a Pragsmatic cover with him a few years ago. Roy was working on the record from the very beginning. Like the little idea that we were trying to make some sort of super record with all these guests was never the intention, but once we had all these people on the record, and it worked out it was kind of like well, you got the super record here. So it was kind of the exact opposite. I wouldn’t recreate with anyone else on that record. I wouldn’t have gotten anyone but Alex for the intro- I wouldnt have gotten anyone else. There was no like plan B’s, these are just people that we reached out to that were friends and it worked out and it’s kind of like a super album and I’m okay with that, too.

SR: You are coming back to Australia really, really soon with Static – X, and Dope.  How excited are you to be coming back?

I’m excited because now I can actually concentrate on getting there because I’ve got all my flights and everything booked and finalizing the merchandise to get printed. I can sit back and relax and focus on going to Australia once I take down the business stuff out of it. I’m excited. This will be the first time us coming back and being a support band. We play a little earlier. We get a little more time to hang out with the fans and stuff. Because usually, when we play, it’s like shows done – straight to the hotel.Up in three hours – straight to the next show. So it’s not a lot of time to do much there. So, yes, I’m looking forward to being awake and aware of what’s going on. Whereas most of my adventures in Australia are not very awake. I’ve heard I’ve had a great time though!

SR:So you know you are little bit of a horror collect, what’s your most prized possession of memorabilia?

I don’t know. It changes all the time. I’m still collecting. My new thing now is collecting weapons not like guns [laughs] those are pussy weapons. Real man weapons like nun chucks and ninja stars and swords – real man weapons. So recently, I just got an I got a knife. It’s a replica of the knife that was used the Sylvester Stallone 1986 film Cobra recent purchase that I picked up. So if you want to know what that is, and check that movie out.

SR: You said that every like 80’s horror movie has a party scene, if you could pick one of those party scenes to be a part of what would it take?

I mean, Return Of The Living Dead is my favourite. That’s kind of where that song gives that little nod is to that to that movie. Even the beginning of that song where the voice says “I just want to party!”. That’s a nod to Return Of The Living Dead because at all at all the zombies rising out of there- it was like they’re back from the grave and they want to party. It just reminded me that and I want to do something similar to that. And so yes, if I could be part of that if they remade it I would. I did get to be a part of a remake of when they remade Night Of The Demons in 2008 I believe it was and we had a song in that, so during the party scene everyone’s dancing to it so i’m kind kind of their spirit.