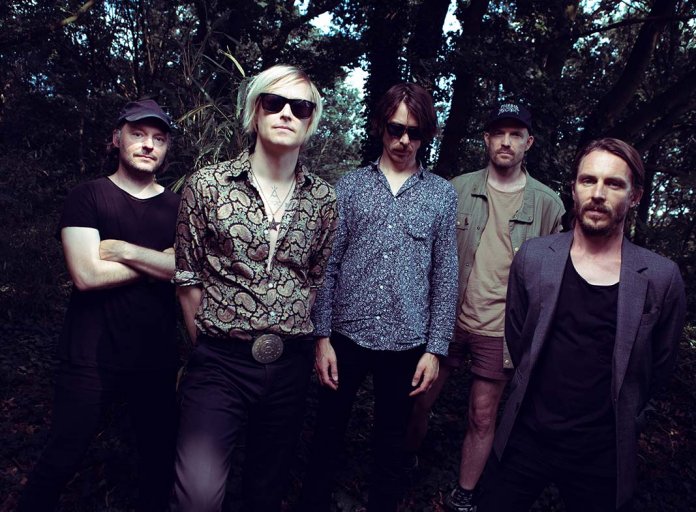 The last two weeks or so before the release of an album or the first show of a tour is always a stressful time for the band! They’ve got to make sure that everything is ready, all t’s have been crossed and al i’s have been dotted; this makes their time even more valuable than it already is. Whilst getting to speak to Refused front man Dennis Lyxzén a few days before the October 18th release of their fifth album ‘War Music’, it turned out it was also not too long before they head out on tour!

The first topic of conversation was about not only the excitement levels within the band, but also how relieved they were to have October 18th almost upon them; Lyxzén’s sense of humour showed from his opening sentence as he quipped “I think we’re also nervous; don’t forget nervous!” before letting out a heartfelt laugh. Lyxzén then continued to explain “it’s exciting but it’s also a weird feeling when you work on something for so long. I mean we’ve been working on this for two years and one day, you have to let it go out into the wild…to have people write mean things about you on the internet! (laughs) Honestly though most people are nice and kind, and I think the amount of people that do write the record don’t write stuff online; but the people who hate the record, they make sure everyone knows! It’s some sort of psychological aspect of what’s happening in the word right now, but it’s just a part of the social media landscape.”

Not taking into account the time Refused was disbanded for, the four years that passed ‘Freedom’ and ‘War Music’ is the longest wait for fans between albums. When asked why the band decided now was the time to release their fifth album, Lyxzén explained “I mean, we just felt that we’ve been working on it for so long…to be honest we should have released it a long time ago, but it wasn’t done. We don’t want to leave things unfinished and we want everything to be perfect when we release it, so it took us a long time to get to where we need to go. In our mind we’re thinking “we should have released it back in May”, but it wasn’t done then and we had to work until we felt it was a worthy representation of what we want it to be. Sometimes that takes you a little bit longer that you want it to! Plus everyone else has their own jobs, other projects and bands so forth, so it’s a matter of getting it out there.”

After finding out the album should have been released earlier than it was, this interviewer was curious to find out what caused the delay. Lyxzén was quick to point out “there wasn’t anything particular thing; the process just took longer than we wanted it to. It was more a matter of when you build something, then put in an extra hour on one specific thing; when looking back at what you just built, your first thought is “now we need to polish that up a little bit.” It was just an ongoing matter of creating something where one song is finished and you think it turned out great, but then you look at the songs from a month ago and think “maybe they need to be polished up a little bit…”. It was just a matter of raising the bar for ourselves, making sure every aspect on the record was as great as it could be and it just took a long time. Kris(tofer Steen) and David (Sandström) who wrote most of the music and produced the record are also perfectionists, so I’d go down and do vocals for a few days and go home; then a month later Dave would call me saying “you know the song we just did vocals for? Well I just changed the chorus, so you need to come and do vocals again!” There was a lot of that, just working on the songs until they’re as good as they could get. I think it’s one of those things with the legacy of the band, where you have to put in the hours and put in the work, to really make the art as powerful as possible. We don’t take this lightly and just decide to randomly put out a record; this is our lives, so we put a lot of time and effort into it!”

During the creation process of ‘War Music’ Refused went back to being a quintet, with the addition of Mattias Bärjed to the band as a second guitarist. When asked if it took much re-adjusting to get back into that mind space for song creation, Lyxzén casually stated “it was a pretty easy process; I mean, we always had two guitarists and I think the only time we didn’t have two guitarists, was for the writing process of ‘Freedom’. Mind you which is funny because as we were writing ‘Freedom’, we actually practiced with Mattias and tried out a couple of songs where we needed two guitar parts. Then once ‘Freedom’ was done and we started touring, he was our touring guitar player; after a year and a half or two years of touring with us, we were like “maybe you should be in the band” and he was like “yep”. So now he’s in the band and it’s worked perfect! I think that Chris and Mattias are great guitar players and they really play off each other in a way that we’ve never had before, so it was pretty smooth getting him into the band.”

Prior to ‘War Music’ being released, Refused had teased fans with three singles: Economy of Death, Blood Red and REV001, in which the first two have been performed at their recent performances. When quizzed how fans have reacted to hearing the new songs live, Lyxzén gleefully pointed out “when we played them live, people have been pretty damn excited! The funny thing is, we haven’t played too many shows this year. We did a short tour in the States with The Hives in May and we played Blood Red and Economy of Death live; Economy of Death at just a couple of shows, but people really liked it! Then we did a couple of festivals, so they haven’t had much exposure. We start touring next Friday or next Saturday, so it’s going to be very exciting to see the reaction; I mean as a band, you almost immediately know if a song resinates when you start playing it live. The energy of the room, you notice that immediately! Sometimes you’ll start playing a song, people go crazy and you know. Sometimes you’ll play what in your mind is going to perfect and when you start playing, you go “nope, that didn’t work out at all.” So it will be super exciting to come out and actually play these songs live, to see how they resonate with ourselves on stage and resonate with the crowd.”

After hearing Lyxzén’s perspective on performing Economy of Death and Blood Red live, this interviewer wanted to put him on the spot and enquired whether or not he was able to pick a favourite song out of the two to perform live. Lyxzén was up to the task as he diplomatically responded “I think both work really well live, but if I had to pick it would be Economy of Death. It’s pretty basic in a way where we don’t have many songs that are driving full on, and I think Economy of Death is one of them. When people hear Blood Red on the record and then they hear it live, they’re going to go “oh yeah, this is awesome”; Economy of Death however was one of those songs where no one heard it, or knew anything about it, but they instantly responded to it. It has a power to it that’s pretty propulsive and exciting!”

Drawing the interview to a close, the final topic was wondering whether Lyxzén had any final messages for Australian fans; Lyxzén was quick to quip “I will say to the people in Australia we’re thinking of you when we are planning 2020, because I’d love to tour Australia! It’s one of my favourite places to play music, so we’re thinking of you and we’re making plans (chuckles) we’re making plans to come Down Under and hang with you soon.”