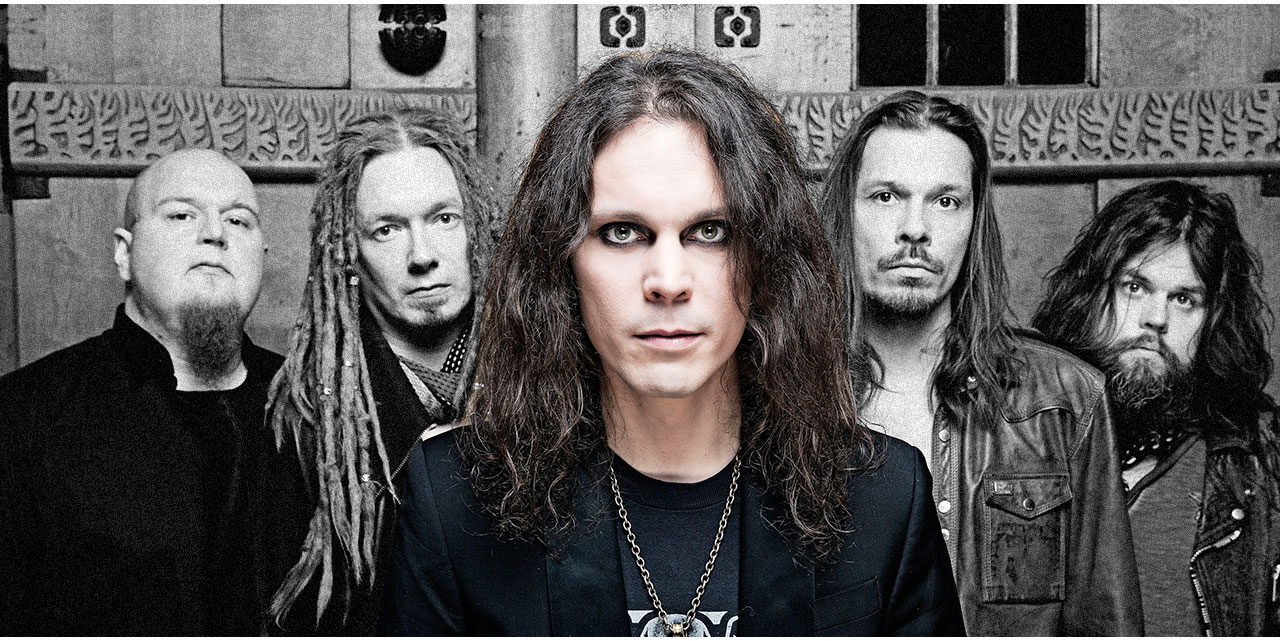 Thanks to Soundwave Festival we had the chance to chat with H.I.M (His Infernal Majesty) songwriter and frontman Ville Valo.

The highly acclaimed Finnish band will bring back the ‘love metal’ to Australia after a 3 year hiatus as part of Soundwave 2014 to introduce their 8th studio album ‘Tears on Tape’.

The easy-going lead singer, who got voted ‘The Hottest Dude in Hard Rock and Metal’ by Revolver Magazine, has been in the centre of the spotlights since the late 90’s, due to the army of fans that are attracted to their melodic metal music style.

See our interview with Ville below:

SR. Can you tell us how do you think H.I.M’s music has changed from the 90’s to your latest release  ‘Tears on Tape’?

VV. Well, at the end of the day, I’m not quite sure how much we’ve changed. I think the essence of the band is pretty much the same; we like the old combination of melody with something a bit heavier music-wise and that’s the essence for the initial spark musically. Then again, we all grew different from each other as we grew-up as individuals and as part of a band that is touring and learning about recording albums. It gives us miles of ideas and millions of possibilities of what to do next time and I find it all really exciting. That is what keep us going, we don’t know what will happen next, that’s what makes sense to us, it has be to a surprise around the corner.

SR. Is there any special meaning to the title of the new album? Is there any experience or personal memory that you want to share with us?


VV. For me, I like this particular song ( ‘Tears on Tape’) and talked with the guys and they all enjoyed it too, and that’s the reason we stick it up.  For me the song  is about the tears that our idols have shed on tape, all the emotions and the passion that bands like Sabbath or Led Zeppelin took down back during the day. It’s the reason why we keep going on and they are the reason why we do what we do. So basically, it’s a great thank you to the music in general for giving us the idea to let us do what we do. Without bands like Type O Negative or whatever we wouldn’t be here, so it’s like a hat’s off to all the people that cost us initially and let us try.

SR. Which one of the songs of this album would you say it’s the best and why? VV. Well, that’s a tough one!  There’s like different songs and what I’m craving now is those of which you know in advance that they will do well live, and then there are also songs that are meant more for the studio, with experimentation and some sonic trickery of sorts. I find it very interesting that we still don’t know.

We’ve toured a little bit last year and there is a song called ‘All Lips go Blue’ and a song called ‘Into the night’, and then there is the album track  ‘Tears on Tape’ and a few others that we played live and the response seems to be different each and every night. That makes it interesting and exciting for us because we really honestly don’t know what’s gonna happen next and how people are going to react. The audience response seems to be different in different cities and different countries, so we keep switching our sets each and every night just trying to figure out what would work that particular night. So I think we are in touring mode, but for me, in songs I subconsciously always think about what will work live. I don’t listen to my own music that much, to be honest I can’t even remember how the album sounds like, it has been ages since I heard it (laughs).

SR. How did you come up with the concept of ‘love metal’ back in the day? Did you ever expect that it would become your iconic trademark as it is now?


VV. Well was simple because people didn’t know how to categorize our band when we just started, some people call us a metal band, a hard rock band, a goth band or whatever in between, so we just thought that love metal will suit us better than black metal. Lots of bands that we really like, enjoy and admire have their own sub-genres. So we thought it would be cool to put kind of a label on the music, which we do to put some people off and make some people chuckle.


SR. Now talking about Soundwave, one of our favourite times of the year. You shared the spotlight with Jane’s Addiction and Faith No More back in Soundwave 2010. Is there any personal highlight that you can remember from that tour? VV. Well it’s quite of a blur, was really exciting for us, we haven’t toured Australia that much and being in all those places, taking a plane around Adelaide and all those cities, for us was something new and kind of breath-taking. It was great because we could meet many great bands and have the chance to travel with them. Also the cool thing is that you have some days off in between, so you are able to enjoy the scenery, so you are not in and out, in and out the entire tour. It’s pretty relaxed, we’ll see what happens now. Also there are all the sideshows as you know, and on all those days in between it’s a little bit of everything; you get to meet bands, you get to see bands you admire and love, you get to play and everything in between, it’s a heaven on Earth really.

SR. Do you think you will have a sideshow or any in-stores as you had back in 2010?


VV. We are still figuring out the schedule but we will try to do 2 or 3 sideshows, whatever we can, I’ll be happy to do some.

SR. Is any band in this year line-up that you are excited to meet or see live?


VV. We have toured before with some of the bands like Avenged Sevenfold and Megadeth. I’m looking forward to see the guys from Placebo and Mastodon. There are a lot of fabulous bands and a lot of variety; some of them are really heavy metal and there are many bands in between, so I’m sure it will be a great tour.

“…I grew up listening to White Zombie…”

I still haven’t figured out the times to see other bands, but the last time when we had the day off we went to the Jane’s Addiction sideshow and we met the band and we had a blast, so I’m hoping we are in the same city when Rob Zombie will be playing. It would be great to see his own show as well, I’m a huge fan, I grew up listening to White Zombie and all that stuff and I can’t wait. I’m a fan-boy (laughs).

SR. Another thing we always wonder is that if your native language is Finnish, how do you come up with the idea to start your band in English? Was that something you all planned?


VV. When we started out it was not very common to play music in English and all the record labels in Finland said that you can’t make it in English but you have to do it in Finnish because is the only thing that sells and makes sense in a small country. But since I grew up always listening to music in English language it seems to be the only way for me to do it. I consider English to be the language of Rock and Roll, but some bands seems to break the rule like ‘Kvelertak’ from Norway; they are great and they play amazing in Norwegian, but to me it seems logical to play in the language of Black Sabbath.

SR. Was it hard for you or did that come naturally? VV. Well I don’t know, you have to believe in yourself and push it. That was the last thing to prove to ourselves as musicians, that was when I was seventeen years old or something. So in H.I.M that’s a big big part and it’s very important and sometimes ridiculous on how it matter to all of us as individuals and how much time takes from us. You have to be proud of what you do and we are all happy to do what we do or be happily miserable, so no complaint whatsoever. When you have that passion, that sort of spark going on, you can´t do anything about it; you just follow it and you hopefully wait that someone has faith in you.

SR. Can you tell us about your friendship with Bam Margera? You have worked with him in Jackass 2 and did some appearances in his own TV shows. Do you have any projects in the works with him?


VV. Well you know I haven’t seen Bam in ages, we both have been touring a bit and our paths haven’t crossed, so we haven’t be able to meet anywhere in the last 3 or 4 years, but we had a great time when we started out in America. He directed some videos for us and helped the band with all the media. He is a great guy, I would love to work with him again and be part of the Jackass group, they are a funny bunch of lads.

SR. Since HIM is now so popular in America, I wonder what can you tell us about winning the Revolver Gold God award last year for having the most dedicated fans?


VV. Well to be honest with you I didn’t go to the award ceremony but some of the guys were there. We were supposed to tour the day before but I got Pneumonia, which was terrible, so we had to cancel and postpone shows. It was terrible! It was the first time it happened, the doctor told me that I had to rest for at least a week, so then we had to figure out what to do next. It was a pain in the butt but I heard that the actual ceremony was fun and it’s pretty nice to have that sort of acknowledgment from both the magazine and from the people as well. It’s pretty special.

SR. Well, sadly we are running out of time, but thanks you for your time!


VV. Thanks, you have been great. See you in a few weeks!

HIM + NOSTALGHIA + THE DEFILED SIDEWAVE SHOWS