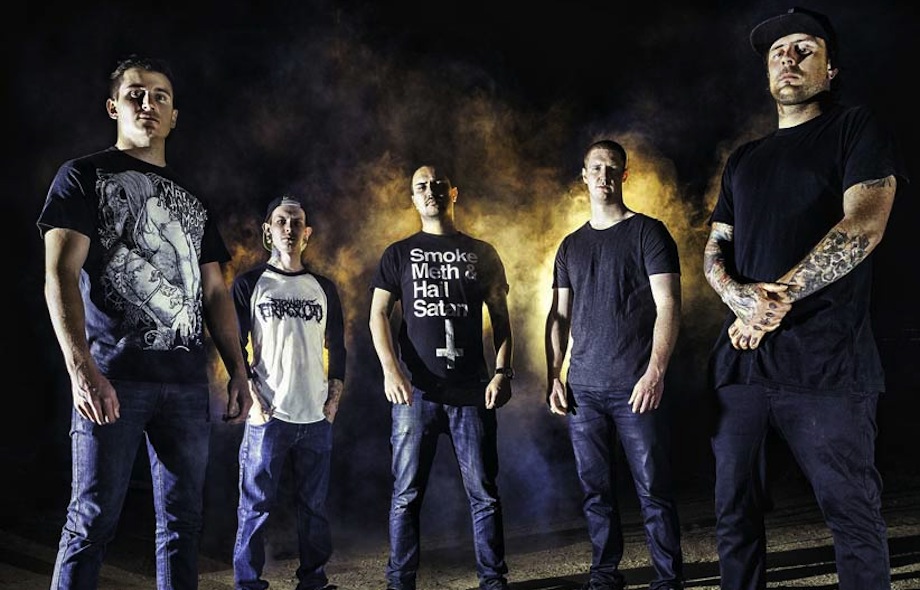 Thy Art Is Murder have had a huge 18 months since their second full-length album Hate crashed into the ARIA Top 40, debuting at #35. Building off an already strong fan-base worldwide, this kind of charting was the first of its kind for a death metal band in Australia, one that is yet to be matched

Just off a length tour across Europe and the USA, Western Sydney’s sons of extremity Thy Art Is Murder too some time out to answer some questions for Spotlight Report as they began  their homecoming headline tour, which will see the four-piece slash their way across the country playing their biggest shows yet this month.

So you guys have just come off a tour with Suicide Silence- What has that been like?

It’s been great. We’ve been sharing a bus with the guys and are having a lot of fun with them. They’re a great band but even better people.

What is one thing you have learnt from watching those dudes night after night?

Performance wise, not much. We both do our own thing and have our own styles of music and whatnot. The biggest thing we’ve learned is how they are as people, how they’ve stuck together, overcome tragedy, and still found a way to love what they do night after night.

Speaking of tour – you are about head out on tour around Australia, with a few other bands like Psycroptic, Fit for an Autopsy, Revocation and Disentomb – what are you most excited about?

Well to be fair we are currently on that tour now sitting in a hotel room in Perth. We’ve been most excited to be home and see our families and friends who we’ve missed for almost 7 or 8 months or whatever its been, play familiar places and see our Australian fans before we go away for a few months.

What can fans expect from your shows?

Basically a 4 hour party with friends. All the bands on the tour are great friends of ours, we get to play a long set and mix in some old songs so we are just trying to hve fun with it and bring chaos to the pit.

You guys are well known for your energy on stage. Do you guys have any “ritual as a band” before jumping on stage?

Not really. We are a strange group of guys and all fairly spontaneous. No one really warms up or stretches. Some of us just relax, CJ normally has a cigarette before we play and maybe we might have a beer together. We meet at the side of stage and we just walk out there and do it. We never know what its going to be like, that’s what makes it so fun.

Looking back almost a year – do you regret the incident that occurred at Soundwave or do you think that its important to do something different on your live sets?

We don’t regret anything, everything turned out ok so it would be silly to dwell on any negativity. We are known for having a crazy set and for a lot of crowd participation and we wont change who we are as a band or as performers. Music is supposed to be fun and physical and energetic.

What was it like for you guys to hear that your second album Hate was the first death metal band to make the Top 40 chart?

It was pretty crazy and we were extremely proud of that.

[embedvideo id=”qqM_tlE6uO4″ website=”youtube”]What do you think it is about your band that sets yourself apart from other bands to receive such a success that has yet to be matched?

I think we write songs, you know. A lot of bands focus on being brutal, or having crazy technical guitar or drum stuff, or ridiculously low vocals and obscure lyrics. We just write music that we like and everything else is a by product of who we are as people. I think when you can connect your personality to your music then you will really reach people and that is why people connect with the music, because they’re connecting with us. That is what is most important in any form of art.

On the topic of success, you guys have had quite a bit of success overseas as much as you have had here – how do think the crowds differ between countries?

It’s just a culture thing. We love touring the world as it gives us a chance to travel and we all love travelling and finding new things. There is definitely a difference between the crowds and the way that they react to the show. I certainly think different continents enjoy different things about our music. We are so lucky that people around the world love what we do and love coming to shows to have fun with us.

Lastly, What is one thing we could find backstage at your shows?