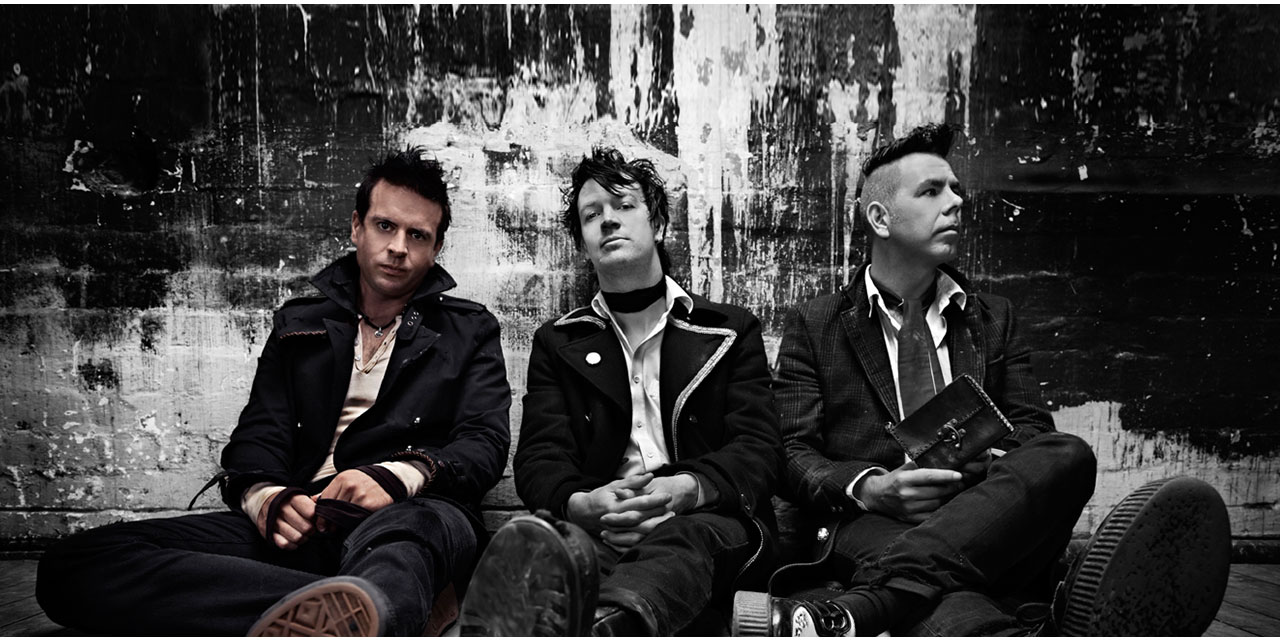 SR. You guys are a huge last minute addition to the festival, after Stone Temple Pilot’s cancellation. How do you guys feel about joining Soundwave with such a short notice? AS. We are delighted! It was a very unexpected turn of events, as we were not planning on doing any shows in a while… But Soundwave is a different business, it’s huge, so when the offer came in we jumped on it straight away.

We had some logistic nightmares to start with, as one of our guys, Chris (Cheney) was over L.A,  while Scott (Owen) was in Byron and I’m in Victoria. But obviously we made it work, as this is an opportunity you can’t let go.

SR. The Living End has this special connection with Billy Joe Armstrong. How do you guys feel about playing with Green Day once again? Have you guys met with the Green Day boys?

AS. I cannot remember what festival it was where we saw them last time. Sadly, we did not get to hang out with them. However, they did put us on a big balcony, sort of side of the stage, to see them perform and I’m pretty sure they knew we were there…They were just insane, and I’m pretty sure that at Soundwave they will be playing a similar show to the one we saw. During the first hour they played some of the big American Idiot songs, and then they played Dookie from start to finish, which is just unreal. I remember that they were in front of one of the biggest crowds I’ve ever seen, like 80 thousand people I reckon, and it was a killer show, so Soundwave will be amazing!

SR. Now moving to a more personal topic: You joined the band in 2002, can you tell us how you got the part and can you also tell us a bit about your musical influences back in the day?

AS. I’ve always been a fan of music since I was a kid. I had an older friend who used to listen to a lot of English stuff. Madness was his favourite band, alongside the Stranglers and The Clash, which is was a huge one for us.

Chris, Scott and I, we have similar kind of influences  and we kind of lived in a parallel universe, as we played in very similar cover bands, growing up listening to Buddy Holly and The Beatles and stuff like that. So, when their drummer left in early 2002, we already had that sort of connection from past lives you know, so it was pretty easy to get along with them. I felt very lucky that I was at the right place at the right time and here we are, a few years later.

SR. How do you think winning multiple Aria awards helped the band to grow up?

“…playing live is essential for us.”

AS. Individually every Aria is very special. However, there is one that I think was for best Australian live band and that’s what we care about, to be a great Australian live band. That for us is more important than everything else as playing live is essential for us. So that award gave us the impulse to keep going and kind of overdo ourselves to get better at live shows and give everything we got.

SR. Nowadays, you guys are one of the most beloved Australian rock bands. However, many bands have changed in order to expand their market. Would you rather go on as much tours as possible to play more live shows, or become a bit more commercial and sell more records, live dvds, merchandise, etc? AS. Hopefully in the near future we will do another record and get out and do what we do best, which is playing live and trying to keep touring, as that is what we love to do. We love to just jump on the van and move to the next town to play.

I don’t think there is any proper trick to expand your market to be honest. For me the goal is to keep working and do what we do best. I think, people who follow trends and try to move from one trend to another might have a short run, as the world moves too fast these days. I think the best is to stick to what you know and do best.

SR. Speaking about live shows, what’s your favourite song to play live and why?

AS. I really like “How do we know”, because it is quite slow but very very heavy and it’s all about the guitarist, and it has the spice…every time we get that song right, it’s very special and you can feel it in the crowd, and personally I love the riff on it! There is no better feeling than nailing that song for me.

SR. Following up on that, what’s your personal favourite live show you’ve ever played?

AS. That’s a hard one to answer as there are too many. I think the most memorable was when we played the Queenscliff Music Festival, which is just down the road from where I live. That was so good, as it has such an unique vibe and we had so much fun. It was a really cool crowd, you could see them loving every minute,  everyone was there for the right reasons, so nobody got hurt, there was just a really cool vibe full of people who love rock and roll just as much as we do.

SR. Back to Soundwave; What songs do you think are mandatory for The Living End’s setlist at the festival?

AS. There are some songs we definitely have to play. I reckon if we don’t play “Prisoner of society” and “Second solution” we will be asked to leave (laughs). Those songs are crowd favourites, and we still get a buzz from those ones as the crowd always goes very ballistic when we play them.

It’s a pretty solid bet, as we know that those songs will bring the house down, so you can count with those songs as part of our Soundwave set for sure.

SR. How many songs will you try to play?

SR. Speaking about studio albums, the latest album you guys released was 2011’s The Ending Is Just The Beginning Repeating. Almost 3 years later, the question all of us have is if you have a new album in the works? AS. It’s definitely in the works in our heads. We haven’t actually sat down as a group and discussed the new record, as all of us are doing individual things at the moment.

The timing has got to be right; we won’t just rush in doing a record just because we think we should. The next record will be done the same way as we always do, when we have a bunch of songs that we believe in, and hopefully that won’t be too far away.

SR. Are there any bands on the Soundwave line-up that you haven’t seen live before and that you would like to see and meet?

AS. Yes, of course…where do I start? (laughs). The one band I’ve never seen and I must see is Living Colour. As a kid I remember songs like “Cult of Personality” and seeing Corey Glover running on stage in a wet suit. They are such as powerful band and I cannot wait to see them.

Obviously I want to see Green Day as they are always great. I also wanna see Rocket from the crypt and Jimmy Eat World as the two of them are such good live bands.  I’m really looking forward to see Biffy Clyro as I’ve never seen them live and they are massive band. They’re from Scotland I believe, and I have a bit of Scottish heritage so I have a good reason to go and see them I reckon.

SR. Have you ever met any of your idols?

AS. Yeah, I’ve been lucky to meet a lot of them. Actually,  I think Joey Castillo, one of my favourite drummers in the world, is playing with Eagles Of Death Metal, I hope he is coming to Australia. He used to play with the Queens of the Stone Age. He is an amazing drummer, and a very influential character for me, so I’m hoping to meet him again.

“… Joey Castillo, one of my favourite drummers in the world, is playing with Eagles Of Death Metal, I hope he is coming to Australia.”

Obviously, Green day is on my list of course! Sitting in the same room with such people is clearly inspiring, so I hope I have the chance to get a beer with them – or a water (laughs).

SR. Just to start wrapping up, we always end our interviews with two iconic questions.

The first one: Do you have any fun tour stories that you would like to share with us?

AS. There are so many! I remember when Chris split his pants at the Queenscliff Festival, and that was pretty funny because his bum was hanging out. We could obviously see it, but the crowd couldn’t, so that’s still the motive of plenty of jokes among us.

SR. Have you ever had any crazy fan requests?

AS. We get asked to play at birthday parties all the time, and we get people asking us to sign their skin so they can go and get a tattoo the next day, which I think is pretty extreme.

SR. Just to finish, I’d like to give you some time to send a message to your fans

AS. Hey people of Australia, we are very excited to be playing Soundwave 2014. For those of you coming to Soundwave, please come to check us out and we will do our best to rock your socks off!

The Living End Performing at Soundwave 2014

*Images via The Living End official website and Facebook page. For illustration purposes only. No commercial gains.