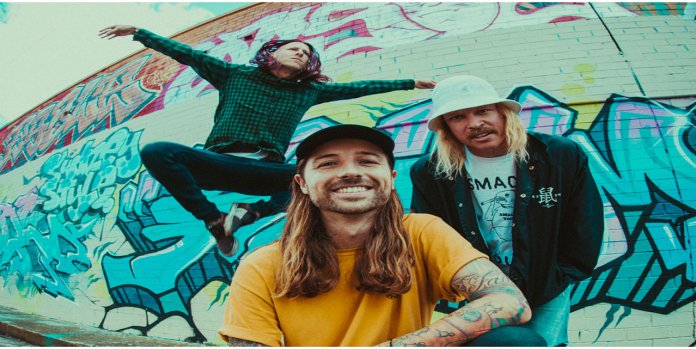 The Dead Love are this generation’s answer to Nirvana. The “shitty grunge” trio released their first music video in 2010 and since then, the Sydney lads have been non stop touring and continuously developing their message and signature style. Their second record The Extinction of Unicorns  was released in late August and has put TDL on the international map creating waves on online platforms including being featured on a plethora of Spotify playlists!

We got a chance to have a chat to bassist Clint Ossington recently about the band and the new album!

SR: The Dead Love are one of my favourite bands at the moment! You guys are locals to Sydney and you’ve worked your way up through the scene and you’re probably most recognisable through your self-proclaimed “shitty grunge” tagline. Where did that term come from?

[Laughs] I think it kind of originated from like some dude just like trolling us on YouTube or something calling us like “washed up emo” or like “shitty grunge” or something like that and we thought that was awesome! We were like “thanks man! We will take that!” but then it was a bit of an internal joke and then like the t-shirts just evolved and we just used it. It kind of became a thing.

SR: Could you give us just kind of a brief history as to how The Dead Love came about?

The project originally started with Stevie [Knight] – the singer, and we were kind of familiar with people in the scene and it was originally meant to be a side project kind of thing because I’d poached him from this other project. We kind of bounced off each other and we played at his little home studio and he showed me some of the tracks that he’d been writing and I thought they were awesome- I connected to it straight away. I didn’t even really know the guy but we sat down and had some beers and then pulled an all- nighter that was about probably 7 or 8 years ago. We’ve been through a few drummers but Miles [Cochrane], when he joined it was like the missing piece of the puzzle. With production as well Stevie does a lot of our stuff. So yeah over the years we’ve just gotten stronger and stronger and we’ve just put a new record out and we’ve never felt better!

SR: Talking about the new album – The Extinction of Unicorns. It has done so incredibly well like within the first 24 hours on Spotify tracks were being featured on every other rock playlist. How are you guys feeling about the response?

To be honest I’ve been feeling a bit overwhelmed but we’re stoked. It feels really good because we worked really hard and it’s our first release with a bit of a team around. We kind of feel like we’ve been building for that moment and now it’s dropped and heaps of people around are stoked. Friends of the band and new people finding the band like here and overseas have been so supportive and we are just so happy. Mostly just because now spotify and those playlists… we just want people to hear our music and it gives that platform to people to do that and it’s just awesome. So we are super excited about getting out on the road and playing the new songs because we haven’t even played most of them live yet.

SR: You did recently do a little tour for the launch of the single Pick Me Up which sold out all shows. How was the feeling knowing that you sold out all those venues?

Oh it’s like a bizarre feeling that brought so much anxiety around doing everything – like is anybody going to come? Will they like the music? [Laughs] but maybe it’s because we are having fun on and off stage. We’re happy and everything seems to have fallen into place and I’m trying to take that angle. Some things are out of your control but you do what you can to get people there but you can only put so much out to have people come, so having those shows all sell out for us was like a dream come true. You do have a little bit of pressure because of like those people who aren’t like super interested in the band just going like oh well these shows sold out they must be interesting! Obviously we are going to do anything that we can, but in the long run if they come, they come. They’re small venues you know so we are very humble about it all. The shows were so fun and knowing that there were going to be people there, then the energy in the room, the crowd singing along is just like wow! This is so much fun! We’re all in this together.

SR: Your live show vibe is just magic! Stevie just like stands back does his thing, and you are just bopping along, doing your thing and encapsulating the crowd as you go. What’s your favourite song to play live?

We’ve gotten to the point in our set now where it’s a sing-a-long set. I always love playing Frown, which was off our last record. I do like playing the new songs too- Pick Me Up. I think because we’re all as stoked as a band at the moment, and happy with our set list it doesn’t feel like we could swap out any of them. We start playing the songs and they all feel good and they all flow.

It’s a hard thing to choose but if it’s an old one I’d say Frown, and probably off the new record Wake Up! Is always really fun. 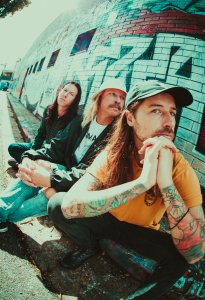 SR: Off the new record I think that Tunnel Vision and Wayne are my fave songs.

We haven’t played them live yet. Wayne is a song that Stevie wrote about the relationship with his father who had terminal cancer and we as a band watched that happen. It was a really intense six months leading up to it. Stevie was playing drums with his dad – they were in a band together. They were best mates, you know people are close to their parents and stuff but they had that level of a relationship. It was an incredibly tough time and I know that Wayne had a really big soul and even like playing it live- we wonder what that’s going to be like the first time.  So yeah it’s a special song.

SR: Going back into what you said before about the pressure going onto bigger things. You’re about to go to the UK to support Roam and With Confidence!

Yeah! We go to Europe soon to play some shows which is like so, so exciting. It will be our first time in that territory and we hope to get a little bit of coverage over there and some people will get out to the shows early and suss out what we do, and enjoy it.

SR: What’s next for Dead Love?

So yeah, records just dropped, about to do the UK tour. An album tour that we will announce so yeah and definitely when we get back from Europe we will look into getting the band over to the US so it’s just a lot of hustling of a few different things. Even though we have been around for a while, we are only just really starting out so we have to take everything into consideration and try to get our music to as many people as we can. So yeah there is some cool stuff going on, there will be a lot more music and a lot more touring, a lot more Dead Love!

Ooh tough one. A Day in the Life by The Beatles

The Dead Love are a band for any music lover, especially if you have a soft spot for extremely well written, catchy songs and a love for the 90’s movement. These guys are ones to watch in the music scene and if you get a chance to check out a live show, do so because you won’t regret it!

Extinction of Unicorns out now!