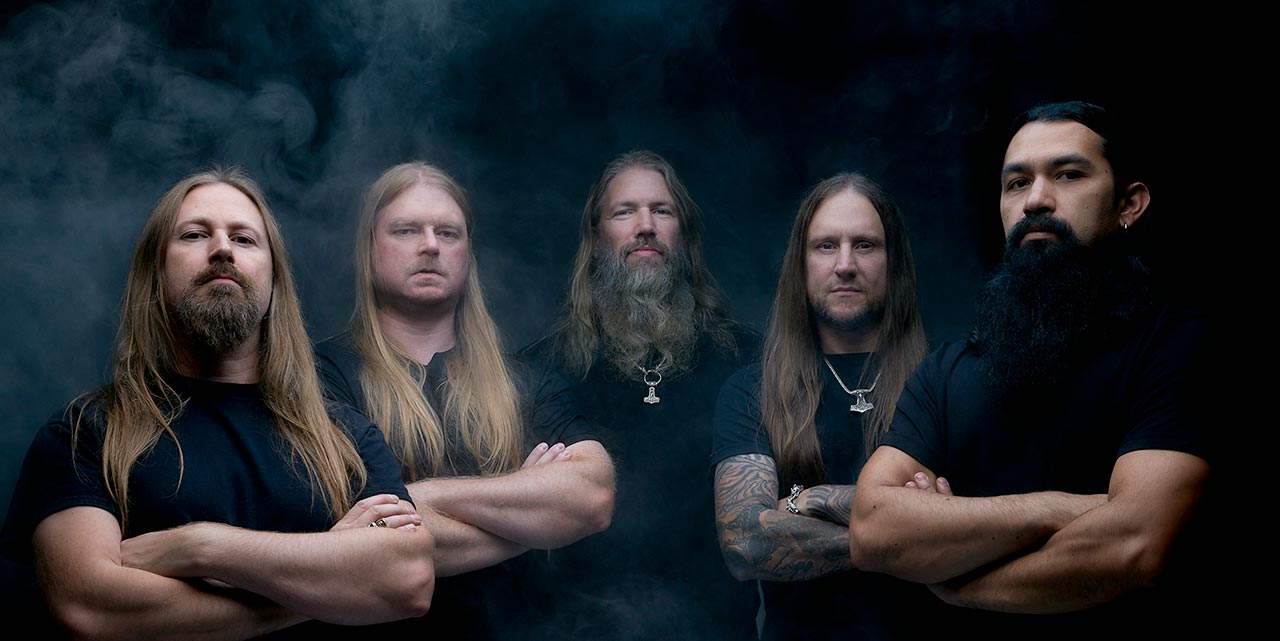 Swedish melodic death metal band Amon Amarth are a force to be reckoned with.  Named after the Sindarian word for Mount Doom and with a love of all things Viking they have been conquering their enemies since forming in 1992. A beautiful blend of irresistible melodious hooks with the heavy overtones the genre is best-known for, Amon Amarth are a band to admire. Their latest album, Berserker is possibly their most epic album so far.

We got to talk with bassist Ted Lundström ahead of the release of new album Berserker due for release May 3.

SR: Just to start us off with a nice easy question: I take it you’re all big Lord of the Rings Fans, so what creature would you be if you were transported to Middle Earth?

TL: [laughs] That’s a good question. I don’t know actually. I have no idea actually. I would probably be a dwarf.

SR: That sounds like a pretty exciting choice actually!

TL: [laughs] Yeah, I kinda like their style, you know? Living in dungeons and forging weapons and stuff – sounds cool to me.

SR: And it goes with the Viking theme!  So, what is it that draws you to the Death Metal Genre?

TL: What draws me to the Death Metal genre? When I started listening it was all about the energy and – like going back to when I started listening probably thirty years ago it was all about the – energy would be the single word I would use because it’s kind of powerful, kind of extreme, you know, when you wanna have something extreme – you’re tired of the radio music, you wanna have something that stands out a bit and I mean with the kind of vocals you have and everything  – it’s cool and it gives you much more room experimenting with lyrics and stuff you can really go all the way – whatever you’re writing about, you can go all the way with a music style like this.

SR: Your songs deal with Viking history and Norse mythology. Was that something you were interested in beforehand?

TL: This was an interest coming from even before. When we started the band, at least some of us were interested in this. You mentioned before Lord of the Rings, he was also very influenced by the Viking mythology and stuff like that. Not only Viking mythology, mythology in general. It’s always been an interest for me to read about different histories and myths and legends and all stuff like that. I mean, I think the main reason we got into play Viking death metal was that our singer Johan [Hegg] he was reading a lot about Vikings at the time we started the band and we really wanted to try to find our own style, you know? Black metal was becoming really big at the time and all the other bands were thinking about gore, blood and zombies and stuff.  So, it’s kinda like a pretty good connection for us – something we enjoyed, something we knew about and not many bands were doing that at the time, so it was kinda like a perfect match.

SR: Definitely! And it’s such an epic story – the Viking mythology – it really goes with the music. I wanted to ask about the new trilogy of music videos. Your music videos for Ravens Flight is really epic and I’ve read that they get bigger with each one. Can you tell me anything about the rest of the trilogy?

TL: Basically, we wanted to do a story. We tried to add different elements from all the songs from the album – or maybe not all of them. It’s kind of like an 80s old school style video … it’s a bit fun too, it’s not only just a video, it gets more interesting when you have some story to follow. It will continue from the first. It continues the same style, a continuation of the same story – it continues into the next video and then the third video. It’s just it gets more and more extreme: more stuff happens, more bloodshed and yeah, more chaos. You’ll have to wait and see, but real excited for us to release part two and three.

SR: We’re really looking forward to it! While we’re on the topic of big, epic videos, what movie would you want to be on the soundtrack for?

TL: Any movie that I would enjoy to watch myself would be a great choice. I mean of course something about Vikings would be most fitting but there’s not too many movies about classic Vikings … maybe one of the Marvel movies would be a great – a little bit of connection with Thor, Mjölnir and all that. That would be pretty funny if we could be in there. Or the new one. That would have been pretty epic!

SR: It would go so well!

TL: [laughs] Yeah, I think so, it kinda goes hand in hand.

SR: I just wanted to talk about the mobile phone game. It’s so addictive! What was the idea behind creating this game?

TL: It was just basically by accident. We were in Stockholm just hanging out in a bar with a couple of friends and that friend had his own company that made computer games and mobile games. And we were just drinking a couple of beers and talking about what kind of games we grew up with and what kind of games we like and one thing led into another thing – of course, the morning after we thought it would be just one of the other “drunk talks” [laughs]  but this idea just continued to grow and we started talking more about it and then we decided to do a game with our own music but in an 8 bit old school gaming style sound. And then like a platform game that everybody can use like on a train or the bus, something you can just play whenever you want, play a little bit – and we tried to involve all the elements from our albums  and Viking mythology and it was really cool making this game because we were working close with the company over the year ready to release it.

SR: It’s such a genius marketing trick too!

TL: Yeah, I mean it wasn’t meant as a marketing trick, but of course everything we can do to get more attention to the band is great. We wanted to do it just because we like that kind of stuff so much ourselves, so we were just happy to be able to do it.

SR: And following on from that, for anyone who doesn’t know you yet, what would you say to get them to come and check you out?

TL: Wow, that’s a good question. We play very melodic, heavy metal style death metal, you know? So, with awesome lyrics in my opinion [laughs], great stories, we have this Viking theme to just dig out from so battles … and warriors and all that kind of stuff mixed in – so I think there is something for everybody either music or lyrics or anything  … we also work a lot with the visual stuff, you know: album covers and stage – everything is connected, it all ties together really, really well so it’s a big epic Viking product! TL: Yeah, it’s similar to what we’ve done in the past, but also a lot of new stuff coming in to this. Last time was more of a concept album, so the whole story was already written – we had to write the music on top of that, try to find the mood of the story and try to translate that into music, so it was very challenging. But this time, we were going back to old school, song by song and I think we wrote most of the music before the lyrics this time, then we were sending all our ideas to our singer who writes all the lyrics. We tried to do every song on its own as a story by itself, and then of course we wanted to change up sound wise a little bit; we always want to try some new stuff.

We’ve recorded two times in England now so we decided to go somewhere warmer [laughs], try to change up the feeling a little bit, try a new producer – Jay Ruston who actually mixed our live DVD that we released before this album. We’re really happy about his mixing, and the way he wanted to record the album was something we were really excited about. To record song by song instead of in the past we would maybe record drums for all ten or twelve songs, and then we start tracking guitars and stuff. So, this time we basically would 90-95% finish every song before moving to the next song and then you can go back after a while to see – when it’s been off your listening for a while – you can go back and see if there’s something you need to change and then you can go back into that, then just do changes. It’s a different way to record the stuff, and also, sound wise we did try a little more heavy-metal-oriented guitar sounds and little bit more acoustic guitar with an orchestra – a new style to make it more fun for us too.

SR: And finally, do you have any message for your fans here looking forward to the new album?

TL: Yeah, make sure you pick it up when it’s released in early May. And we’re looking forward to coming back to play some more shows. We always had a great time being in Australia, so I really hope that we can come back as soon as possible. As soon as the album’s released we’re gonna start touring and then I guess we have one or two years ahead of us just touring the world. Really looking forward to getting over there again [to] play for everybody.

Berserker is out May 3rd!