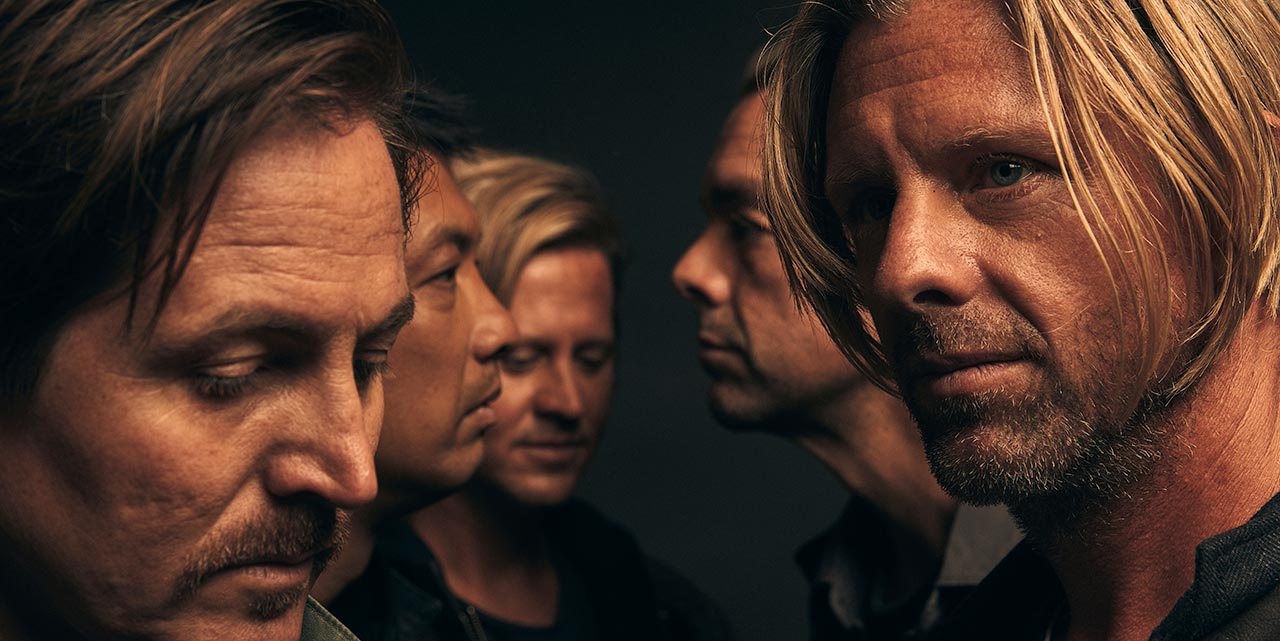 We recently caught up with Drew Shirley, Guitarist of Grammy Award winning American alternative rock band, Switchfoot. We had a chat about their new album Native Tongue, their songwriting influences, and all things guitars!

SR. Your band Switchfoot has a new album coming out very son, how are you feeling about that?

We are very excited about it. When you get to album number eleven, you wonder if you’ve still got what it takes, and if you’re still relevant. We started the album when we had a Hiatus from touring, we wanted to rethink everything, push pause on touring and push play on our home lives and family, and get everything sorted out. We needed to recharge our batteries and re-evaluate, and we found that we did have a lot more songs to sing, and we have some topics that were really passionate about that we wanted to put into music. We’re really excited about this album, and we’re ready to tour again and play our new music live.

SR. Have you got plans to come over to Australia on your album tour?

We’re gonna get there as soon as we can. At the moment we’ve got a USA tour booked, as well as some shows in Europe and Japan, then back to the USA. We are definitely going to get to Australia as soon as we can. I’m not exactly sure when, I’ll have to contact the booking agency and see where the plans are at. I know they’ve been working hard on setting up the tours we’ve got booked so far, and I have no doubt that we have Australia in our sights very soon.

SR. What were some of your influences for the new album?

We recorded a whole bunch of songs, and then we went through them and picked out the best ones for an album, a lot of times the songs were completely different styles. We’re a band that can have a whole bunch of different styles on one record, because we’ve always done that, and it’s like our album are playlists almost. The tracks are all Switchfoot, but they’re all unique in their own way. There are some really grungy songs, similar to The Pixie’s and Nirvana. There’s a track that’s very much to the style of The Beatles and George Martin, it’s very bluesy and kinda crazy. There are songs like ‘The Hardest Art’ featuring ‘Kaela Sinclair from M83, which is really eighties sounding with a lot of keyboards. It’s a great travel song. ‘Take My Fire’ is a song that has a Led Zeppelin appeal, with some sweet guitar parts. There’s a whole lot of different musical styles, but the heartbeat of this album is that we have something to say, it’s not just recycled music and lyrics. Some of the concepts in it that John came up with in his lyrics just blew us away. I don’t think that guy will ever run out of good ideas.

SR. You’re the guitarist of the band, did you use any new equipment for this record?

Yeah, I love getting guitars, I have way too many. I started the year by selling a whole bunch, it was hard to part ways with some of them. I have a signature guitar with a company called Elliot Guitars, if you look them up online you check out my signature, it’s called a ‘Royal Haven’. It’s the guitar I’m most excited about. Pedal wise, I use a lot of Pedals, mainly ones from Petty john Electronics. I have a tonne of pedals, most guitarists do, and it’s great to have a wide range. As far as Amplifiers go, my sponsors at Elliot Guitars have also made me some Amps, I’ve been using those ones live, and I’m basically flying the Elliot Guitars flag with my gear right now.

SR. Did you regret getting rid of any of the guitars that you sold?

Yeah, I think I do a little bit. It always happens when I sell guitars *laughs*. I had a black Gibson les Paul with P-90 pickups in it, I got it in college and it was so awesome, I kinda regret selling that one. I also had a Gold top Gibson les Paul that I reliced myself, I always used to bring that one on the road, I even played it on TV a few times, I sold that one and I miss it. I miss them, but there are people out there who bought them who are really stoked to have them, it’s good to think that they’re being loved and enjoyed by somebody else now. The very first vintage guitar I got, I bought on eBay from a guy in Australia, and it was a 59 Gibson Les Paul Junior. It’s up for sale on reverb at the moment, so if there are any guitarists out there who want to see this guitar come back to Australia where it’s from, you can buy it on the Switchfoot store on Reverb.

SR. Do you have a favourite song off the new album?

I do, I’d have to say it’s ‘Let it Happen’, that’s my favourite. It’s The Pixie’s meets Nirvana, and it’s basically a song about not trying to control things. I’ve learned a lot about that this year, as marriage will teach you, you realise when you try too hard to control things it doesn’t work out too well. That’s definitely my favourite at the moment.

SR. Your music has a lot of strong lyrics and awesome musical sections, what aspects of life influence these things?

Jon had another kid this year, I think that’s influenced his life quite a bit. When you have kids, you start to see life from a different perspective. Your heart opens up, you start to love like you never knew you could love before, we’ve talked a lot about that as a band. It gives you an underlying hope that transcends all of the current news and the current problems in the world, and we’re a band that wants to sing about hope, and we believe that hope deserves an anthem. We want to be a band that shares that anthem of hope.

SR. How did you approach things differently on this album, production wise?

We changed it up a bit. Instead of going with a hot-shot producer, we decided to call in some friends from other bands. We have friends in One Republic, and Need To Breathe. We asked them what they would do with the tracks, and where they thought we should take them. It was like going to our peers and asking for some constructive criticism, instead of a producer that you hire, that you don’t necessarily know, who’s just going to tell you you’re great and cost a bunch of money.

SR. Do you still play some of your older tracks at live shows, or are you leaning more towards the new stuff?

We always play a mix at live shows. After eleven albums, sometimes we don’t know what to play anymore, there’s over a hundred tracks to choose from. We make the set list up about an hour before the show, and we change up songs and add songs that are requested. We’re excited to play the new songs, but we also realise that a lot of people who come to our shows want to hear us play some of the old songs that they’ve connected with over the years. We want to feed both of those appetites.

SR. What inspired the album artwork for the new record?

The artwork came about because of an image that John saw on the internet somewhere. The boy in the picture is actually our keyboard player’s son. We wanted to try out the photo idea and see if it looked cool, so he came in and we took some shots, and they turned out really well, we think it’s a really cool album cover.

Switchfoot’s new album Native Tongue is out now on all platforms, and you can listen to it right now on Spotify or iTunes. To keep up to date with what these guys are up to, follow them on social media or via their website.

Get the album now on Itunes