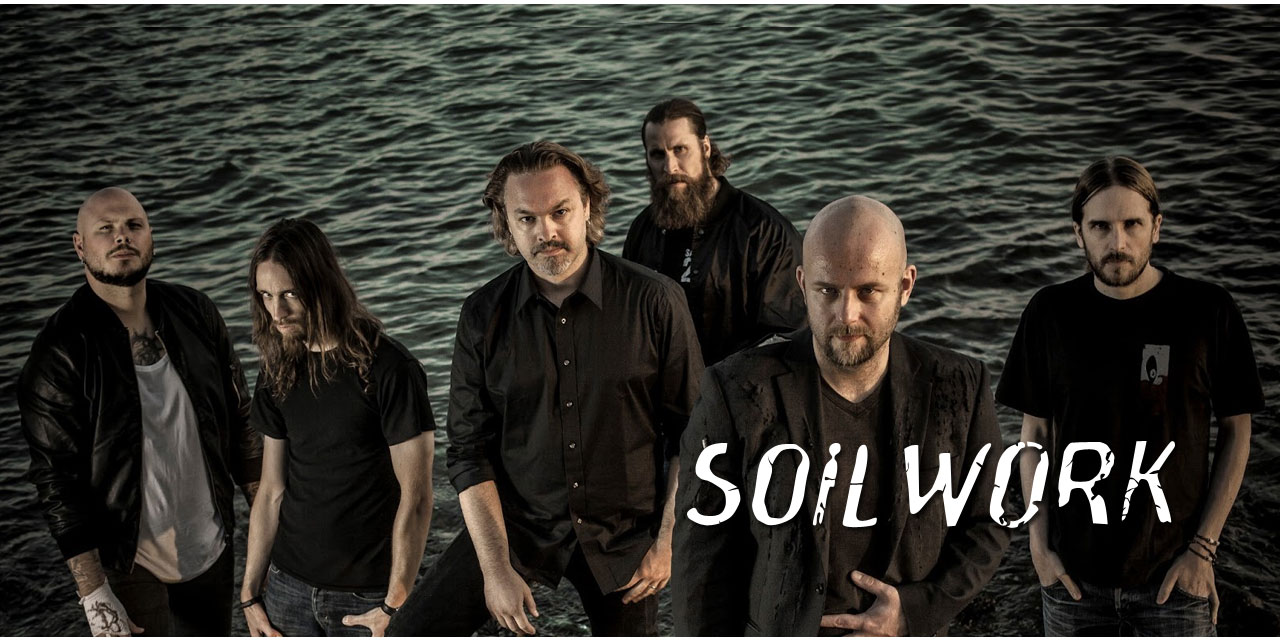 Thanks to Riot Entertainment , we had the chance to interview Belgian heavy metal drummer Drummer Dirk, who plays in the iconic Swedish melodic death metal band Soilwork, about the band’s upcoming Australian Tour this October, working with Fredrik Thordendal from Meshuggah and much more.

1)    We would like to start asking you if you can tell us a bit more about your early days. How did you get into music and why drums? My parents were music fanatics. I grew up in Belgium and I remember being super excited when Saturday’s Top 30 was on the radio. I would tape the songs I liked and play them all week. My mom and dad had a wide variety of vinyls, pop, rock, classical… You name it. I heard different stuff all the time. They encouraged me to pick up an instrument in school so I got started playing violin when I was maybe 7 years old. But as the years passed I was drawn to stuff like Prince, Beastie Boys, Run-DMC, Europe… Eventually I moved on to the electric guitar. Then in the late eighties I discovered bands like Slayer, Napalm Death, Carcass, Repulsion and Terrorizer. My world changed completely. It became apparent I wanted to play drums and play them fast, so my parents got me a second hand jazz kit which I bashed into oblivion daily.

2)    Moving into Soilwork and the upcoming Aussie Tour…Can you tell us about how did you join the band?

Back in early ’04 I got a call from (then-guitarist and founding member) Peter Wichers. The band was drummer-less and they had heard the album Irradiant of my band Scarve through Laurent of Listenable Records. They loved the record and my drumming on it, and were wondering if I might be interested to fill in for them. Of course I wasn’t gonna say no! It was a bit of a tough decision though, because Scarve was really up-and-coming. But I’m very happy I joined Soilwork. And Scarve has new music in the making too.

3)    How hard is to change from Scarve to Soilwork and vice versa?

They’re both a part of me. Music runs through my veins. It feels natural and quite effortless for me to play metal-related music. Whether it’s Scarve, Soilwork, something like my grindcore band Bent Sea (where I also play guitar) or any other music I happen to play- I’m constantly recording session drums for people in my studio- it all feels like an extension of me as a person. Like a third arm or something, haha!

4)    The Living Infinite is the latest album from Soilwork, and it’s the first double album in death metal history. Can you share with us your experience working on this album? Did you and your band mates knew it will be a double album, or that came out after?

We decided to make The Living Infinite a double album because we felt that it’s a good way to challenge ourselves as a band; and also to show our fans that Soilwork still has a lot to say despite line-up changes and the turmoil that goes with them. Our singer Björn came up with the initial idea. His ocean-based concept seduced us all and resonated with us each on a personal level, which in turn guided us throughout the writing and recording. It was a very interesting project in the sense that The Living Infinite was more of a band effort than any other Soilwork album I was involved with. Having space for 20 songs allowed us to develop ideas that might have been cut from a regular LP so there’s truly some of all of Soilwork in the end result.

5)    What is your favourite song from The Living Infinite and why?

It’s just about impossible to pick a favourite… but I’d have to say “Long Live The Misanthrope”. I just love the guitar work in that song. It embodies everything Soilwork, and the fact that our new guitarist David wrote it makes it even more amazing to me. I like them all, though! I’m very proud of this record and of the phenomenal work all of my bandmates did on it.

6)    What can Australian fans can expect about the Aussie Tour?

7)    What would you say is the best live show you ever played and why?

Sometimes a show is just perfect somehow. Graspop and Roskilde 2011 stand out in that regard. So does our last San Francisco gig earlier this year. For me it has a lot to do with the vibe on stage and in the crowd. I almost always have a blast playing though. The only time it sucks is when it’s too hot or there’s no air.

8)    While ago you worked with Meshuggah ‘s Fredrik Thordendal . What can you tell us about working with him?

It was a unique experience. I absolutely look up to and love Fredrik’s work so it felt quite surreal for me to record drums with him. But he’s such a humble, down to earth, funny and interesting person- we often just ended up talking and playing each other music for hours on end. “You gotta hear this song!” That kind of stuff. We laughed our asses off and had a total blast. One of the most amazing moments was when Fredrik set up his drumkit- he has this amazing Ludwig with two 26” bassdrums, huge toms and cymbals- and we both just jammed for an hour or so. He’s a very groovy drummer!

9)    Have you ever had the chance to meet any of your music idols? Can you share that experience with us? If not, who would you like to meet? I have. Devin Townsend is one of them. Shane Embury is another. So are Gene Hoglan, Pete Sandoval and Lee Dorrian, the three of whom I had the pleasure to interview extensively. Scarve touring with Meshuggah was an amazing experience. And working with Devin was just hilarious. When I sit and think about it, it blows my mind that I got to meet and hang out with all of those people and play music with them. Talk about a lucky dude. The common thread is how humble and kind all of them are.

Just to start wrapping up, we always ask these questions to our guests:

10) What’s the craziest thing that’s happened to you while on tour?

One night on tour with Hypocrisy and Dark Tranquillity, we were all going crazy in the front lounge of our bus. I was jumping around pogoing to music and split a rib landing on the backrest of a bench. That night we crossed over to Canada and I was dead-pale with blue lips when I crawled out of my bunk. The rest of the tour was a bit painful for me, haha!

11) Following on that…What is the craziest fan request you(or the band)have received?

We’ve been asked to autograph all kinds of somewhat crazy things, from intimate body parts to someone’s baby’s forehead. Nothing completely nuts that I can recall though. But it might all change this weekend when we play Mexico City for the first time ever… Haha!

12) Can you give any advice for Australian aspiring musicians who want to make a career in the industry?

Work your ass off day and night to be the best at your instrument. Be interested in all aspects of the business so you can keep control of your career. Learn to promote yourself and ask other musicians and music biz people for advice. Be prepared to spend more time doing emails than actually playing music. It’s certainly tough at times, but it’s all totally worth it in the end!