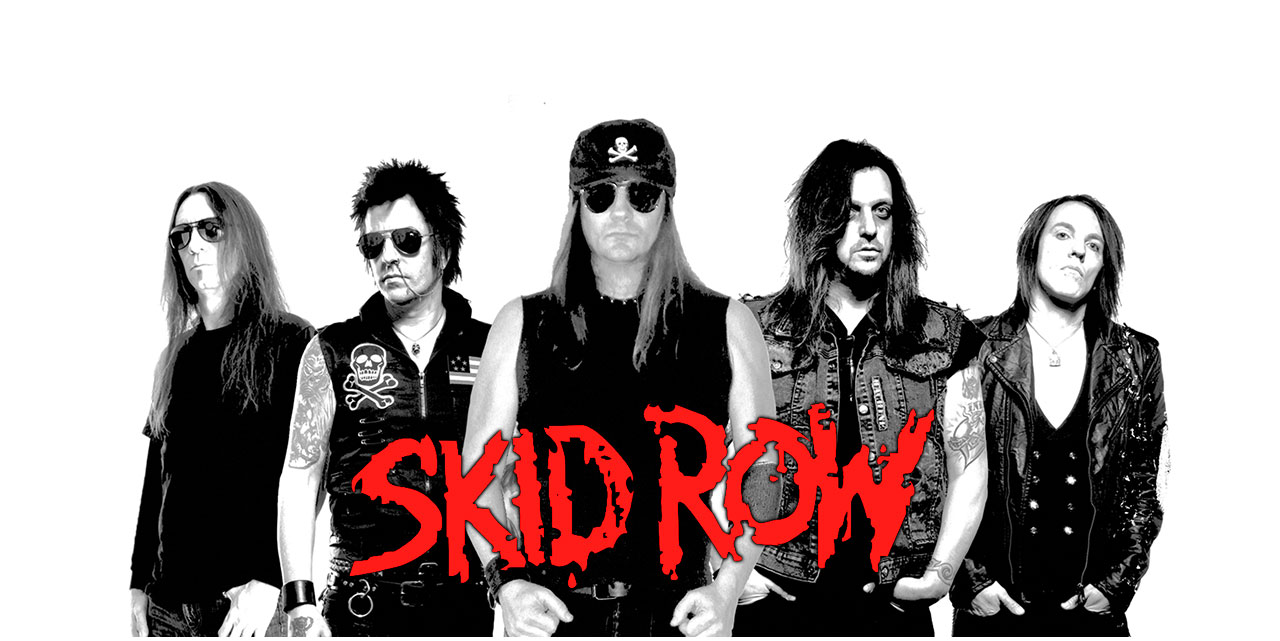 When bass player Rachel Bolan founded Skid Row in 1986 together with his guitar playing mate Dave Sabo, little did they know the band would still be going strong 28 years later. Since these hard rocking legends are hitting our shores again for a nationwide tour in April with Ugly Kid Joe, we got to speak with Rachel and ask him all about what the band is up to these days.

SR. You guys are coming back Down Under to tour with fellow iconic early 90’s band Ugly Kid Joe. That sounds like a must-go for the fans. What are your expectations for the tour? RB. It’s gonna be great! We haven’t been back in Australia in quite a while and we just finished a very successful tour co-headlining with Ugly Kid Joe in Europe. People were very excited there and it was a strong tour, so I have high expectations. We are also going to Tokyo and New Zealand before we get there to rip it off in Australia, we just can’t wait!

SR. Are you guys planning to jam on stage with Ugly Kid Joe? I’m sure many fans would love to see that!

RB. We actually did that a few times while on the road, so I’m sure we’ll have something going on.

SR. Many bands pay tribute to AC/DC when they visit Australia. Just last month Bruce Springsteen played Highway to Hell  on his most recent visit here. Are you guys planning to follow that trend?

RB. That’s funny, because Highway to Hell is a song that we always jam. We are huge AC/DC fans and we know the song very well, so maybe it could be good to improvise something at the shows.

SR. Tell us about Skid Row’s latest release, the EP United World Rebellion: Chapter One. What can you tell us about the idea behind it? RB. We are doing it in three chapters; as you know Chapter One has five originals and two covers and we are keeping the same format for the next two EPs. We are actually in the studio right now recording chapter two.

It was just a cool idea to do instead of just releasing a full length record. It pushes us to put out more bodies of work at the time, instead of just one large one. That helps us to keep going and going, to keep writing, and to be together as a band. We have never done something like that, and I must say it has been a really cool experience and our fans really like the format.

SR. What I personally like about the EP is that it has an old school feel to it, and that you’re not trying to find a new sound like so many other bands do.

RB. I’m really glad you feel that way, as it’s really cool for us to get this sort of feedback. We went back to our roots with a lot of care, because after many years doing this, it’s easy to make the mistake of straying away from your past work. We are obviously more mature, we worked really hard for this, and -despite sticking to our roots- we are not the same kids from the first two records.

It’s easier now actually, as there are so many life experiences inserted in what we play and write. You can change the people you work with, but your soul is still the same as the one of that kid who stands in front of the mirror and dreams to play guitar in a band.

SR. How do you personally deal with the responsibility of being one of the original Skid Row members?

RB. We started 28 years ago, and it’s a huge responsibility to be one of the faces and to protect the integrity of what we do, to make sure that we keep delivering good music and releasing new stuff. There are many bands from our era that may have been cooler than us, but they stayed in that era. We continue doing new music, but without losing our roots.

Also, we have a lot of respect for our fan base, because our fans are the most important thing to us, that’s why we are very approachable and we love to meet and have a good laugh with our fans. We have to respect the Skid Row name, and what it means to us.

SR. Johnny Solinger joined you guys in 1999 and he adapted so well to the band, earning the respect of all the fans in record time. What was so special about Johnny that made him the right choice for the frontman role? RB. He came very well prepared. We gave him a bunch of our big songs to play at his audition, to see if he was able to diversify and bring a new vibe to our music. We didn’t want a guy capable of just singing our songs, we wanted somebody capable of being his own person while playing with us, while also being able to capture what we did in the past. He did that, so we already knew in the middle of the second song that he was our new singer.

Also, the fact that he is a cool, laid back friendly guy helped a lot, as there was a mutual respect there straight away; from us to him for being so professional and dedicated. and from him to us for our past. The fact that we are here still playing together almost 14 years later is a good sign. The funny thing is that after 14 years, he is still “the new guy” in Skid Row, but he takes that with humour and always laughs about it. I respect him a lot, as his main goal was to go out there, become a great singer and put on a good show – and he nails that every time.

SR. You are probably over this topic, but obviously we have to ask you about Sebastian Bach. In an interview a while ago, Bach said he would be willing to reunite with Skid Row to play a show just for the fans at least one more time. Would you guys be open to playing with him again?

RB. I honestly feel that questions about him are so far off now, because Johnny is our singer and he has been in the band for 14 years. So answering a question like that is kind of a waste of time, I hope you understand.

SR. Sure, no worries. Let’s move on to your activities outside of Skid Row; you recently played bass on both of Stone Sour’s House of Gold & Bones-albums. How did you get involved with Stone Sour and what was that experience like?

RB. I met Corey Taylor at one of their shows in North Carolina. It was a brief meeting but we hit it off good. Corey called me out of the blue after they split with their bass player, and told me that they were working on a double record, and asked if I’d like to play bass on it. Obviously, I said yes straight away, as I really like their music. They have great energy and they write amazing songs.

I was, and still am, very flattered of being asked to play with them. I love the end result of the albums, and I feel really humbled that they wanted my style for their new record. It is a huge compliment, especially coming from a bunch of guys that are so damn talented. They treated me as one of their own, letting me do “my thing” with freedom and only constructive comments. It was also great being able to work with producer David Bottrill, who has won three Grammy awards. It was awesome, one of the best and most memorable experiences I had in my career so far.

SR.It seems that you enjoy collaborating with other bands, do you have any other future projects in mind or is your focus now 100% on Skid Row? RB. We have been so busy with Skid Row working on the new EP’s, and with the tour starting soon in Tokyo we will probably finish touring around December. After that we will probably do the same; writing, playing, recording and maybe touring again, so I really don’t have time now. But I’m sure that if somebody would ask me to do something I’d consider it, and probably do it.

SR. We have some classic questions we always ask all our guests. The first one is if you have ever got a crazy fan request that really surprised you or made you feel awkward?

RB. A weird thing happened once while I was taking some photos and signing stuff with a group of fans after a show. I heard this girl’s voice asking: “Hey Rachel, would you mind signing my arm?” I said “sure, I’ll get close to you to sign it” and she replied “You don’t have to, here it is”: she had a prosthetic arm and handed it to me, and I was just holding it not knowing what to do while everyone was laughing their asses off. Obviously I was being set up for a joke, we had a good laugh about it.

SR.  Similar question, but this time focusing on the band while on tour. Do you guy have any classic stories or life changing memories to share with us about your life on the road? RB. We had a tour scheduled for September 2011, and obviously 9/11 happened – but while many bands cancelled immediately after that, we did not cancel the tour. We just thought we couldn’t let these terrible events affect us like that. We did not know what to expect from the shows, but the fans appreciated them so much. Each time any of us got approached by fans, they just thanked us for not cancelling. That made us feel better about ourselves, and it also made fans feel better about themselves, as we helped them forget for some minutes about what was going on in the world. That was a really life changing experience for us.

There have also been so many instances, where we got to meet kids from the “make a wish” foundation that wanted to come to our shows. Some of them are still around, and some sadly aren’t, but the fact that we are part of their wish-list is really touching for us, it’s amazing…it’s kind of hard to even believe it. Being important to others like that, is something that absolutely changes your life.

SR. To finish, we want to give you the opportunity to send a message to all your Australian fans.

RB. All I can say is thank you so much Australia for your unconditional support over the years since the 80’s. It has been awesome, and the fact we are coming back to do a full tour with our friends of Ugly Kid Joe feels great. So we promise that we will come out and play as hard as we can. The fact that you guys want us there in your country once again means a lot to us, so thank you again and we can’t wait to be there!