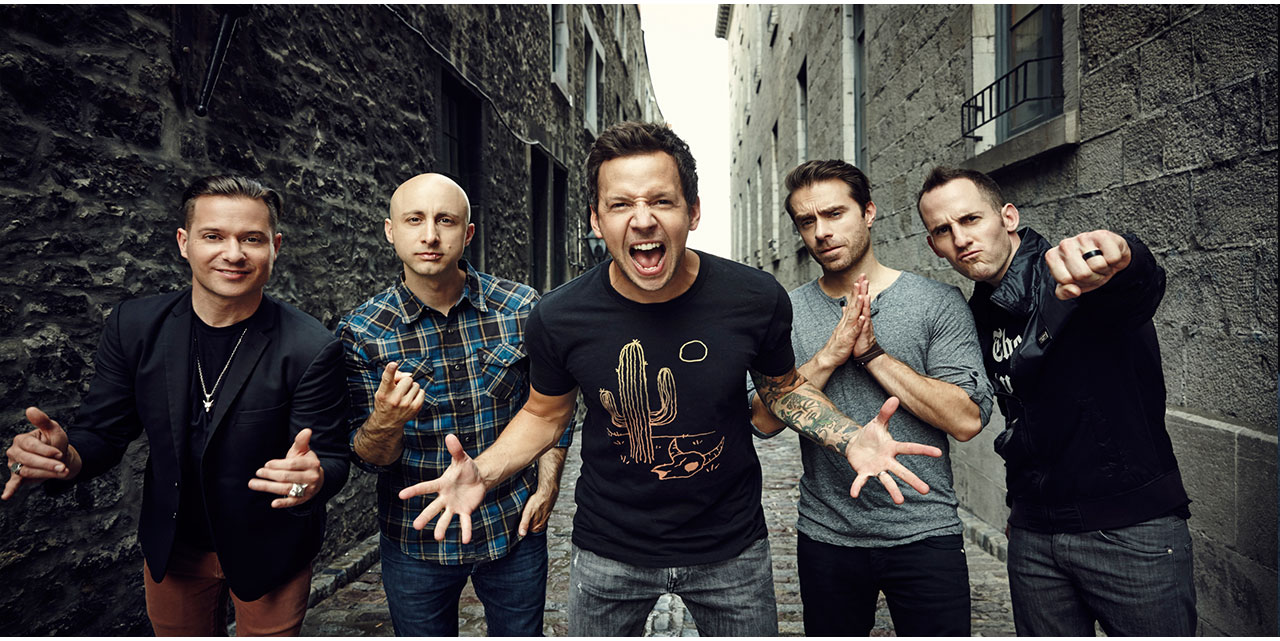 Simple Plan have just celebrated the 15th anniversary of their debut album No Pads, No Helmets… Just Balls. The record gave us hits such as Perfect and Addicted which pursued the band to create a rise in the teenagers of the day, which had an effect which was something not so simple.

Thanks to Warner Music we were lucky enough to snap up an interview with the band’s guitarist Jeff Stinco about the tour, rise and fall of the band and whats next for Simple Plan.

SR: Simple Plan has been a heartfelt household name for many of us sprouting from our teen years and now you’ve just released your 15th anniversary tour edition re-release of No Pads, No Helmets… Just Balls. When you look back and coming forward to now, what thoughts go through your head?

God what was I thinking?! [laughs]

It was a crazy time, we started out very naively wanting to tour the world and you’ve got to be careful what you wish for because sometimes it can happen and it can catch you in a crazy whirlwind and you go “woah!”. That time flew by really quickly and those adventures really did happen.

It was fun, it was a crazy time. We were young, we barely slept, partied a lot. Just had a great time doing what we were doing.

That record was special and it had a big impact on people, a bigger impact than we could ever imagine and it changed our lives as well so it kinda made sense to celebrate that anniversary when it came around.

SR: You are bringing the anniversary tour to Australia very soon also, how are you feeling about that?

Well we love coming to Australia; it’s been very awesome for us. We had early success in Australia, we came often. I remember when we played Melbourne in the early days, you were playing like tiny, tiny clubs. There was no buzz and we were playing 100, 250 people when we first started out. Then we came back and started playing arenas so it was a really cool adventure to see the band grow from the first to the second record. But we even played a big festival, a Triple M festival, it was a big deal! You had Billy Idol playing there, and what’s that Australian band with the bald guy…? Oh Midnight Oil! [laughs]. Everyone was like “oh wow you look like a younger version of that guy!” It was really fun.

SR: As you’ve just said, you’ve been here a few times and you’ve also done some collaborations with some Aussies like Jenna McDougall from Tonight Alive on your track Jet Lag. Aside from seeing the band grow, what do you love about coming here?

Australia is more exotic, the weather is more pleasing than Canada but the people are very similar. We come from similar roots, we have a very strong English community here. Melbourne is a sort of Montreal type city; very artsy, very fashion forward. Sydney is like; whatever city you want it to be, then you have the beaches. We’ve had a lot of fun and we’ve made a lot of friends in Australia. A lot of the appeal is just going at it. We’re going to be there for about 10 days and i can tell you there is not going to be a lot of sleep because we have a lot of friends is Australia. A lot of our friends are artists now, a lot of them are in radio and pretty much everywhere.

SR: The trend of doing these anniversary tours has skyrocketed in the last 18 months, what made Simple Plan join the bandwagon, and how do you feel playing the album in full communicates to your fans?

It’s a fair question… there is something cheesy about it. It more started as a request from our fans. They were saying like “it’s coming up to the anniversary and you guys don’t celebrate very often”… which is true. We never really stopped the smell the roses, but it was time. Those songs changed our life and oddly enough it really had a big impact on a lot of people. If anything, when we started doing the anniversary tour in the US, we were blown away by the amount of people who were coming to shows and had never seen simple plan live, so we figured a lot of those people were too young at the time to even come to our shows but are now of age to come to the shows. It’s an interesting phenomenon. New faces, a lot of new faces, some hardcore fans as well. I think some curious people too, so it’s an interesting mix

We were questioning it but there is nothing wrong with celebrating a great moment in one’s career and ones life and that’s one of those moments. We’re playing the full record and then we barely stop and come back on stage and play all the hits everyone wants to hear so it’s a cool balanced show. The good part for the fans who aren’t so into that first record is that it goes for about 40 minutes, so live that’s about 32 minutes [laughs] so it’s over with and done really quickly. So then we can move onto the hits [laughs].

SR: As you were just saying this is a celebration of this moment in your career, and a lot of bands haven’t been able to make it to this point, what’s your secret?

Against all odds really! [laughs]

Friendship i think i see a lot of bands from that era that don’t even talk to each other anymore. A lot of those bands are touring for the wrong reason, they don’t even have fun doing it anymore and you can tell, it shows on stage. We still see a lot of bands backstage and playing festivals from that era and a lot of those bands are just really bitter. I think my band, My guys, we’re all still friends, we all still hang out together when we’re not on tour, we talk a lot, we’re still very passionate about what we do and i think if anything, we are very respectful of our fans and we understand that Simple Plan is bigger than some of its parts it’s not only about the singer,it’s not only about the songwriter… it’s about this thing that we created together and we love it.

SR: Looking at the almost opposite side to that, in the ever-changing music world, would you say that there would have been event that made you question that band or question the genre in general?

Oh often. There is a time where it really became about a hairdo, which sounds kind of funny when I say that. There was this scene where it was all about desperate lyrics and really dark subject matter and about a hairdo that long-haired thing that I couldn’t get because I’m bald, but the rest of the guys in my band did it and it became a really big fashion statement.

And it was really about that more so than the music,. And that was sort of shitty period in music and it kind of lead to a point where guitar music or “rock music” became less and less relevant. And there was a period i think around 2008 where you know there was a switch to a more electronic and poppy sound on the radio a lot of rock bands wouldn’t get played anymore and to be very fair pirating of music became such a big thing that it was starting to make us doubt that we could keep going as a band.

Recently I would say about 5 years ago there was a shift, suddenly streaming came out, suddenly fans were going to shows a lot. I don’t know why people go to events, maybe they want to live something really true in an era of everything digital and online. That’s my theory [laughs]

We have great shows, more attendance than at most points in our career. I would say that about 2008 was just a really low point in our career and it wasn’t because the record wasn’t good, I think that it was because we tried too hard to follow the electronic sound and we kinda missed the mark. Although there were some really great songs I think the overall aesthetic of it just didn’t glue, sometimes it takes a shitty record to make a better one.

SR:What’s next for Simple Plan?

I think being in a band and no pun intended, comes down to something really simple… You make a record, then you tour your ass off, then you make another record. Basically that’s what we do. We have a lot of things to say and a lot of music to come out and the question as always with every record is how far can we push the envelope to what Simple Plan is on the next record. That challenge is definitely interesting for us as musicians, and we’re always very excited to take it upon us to push the envelope, but to be ourselves. That’s gonna be the challenge!

There are a lot of places around the world we haven’t been to and more places are opening up to rock shows, so it’s an interesting time now to be touring. The fact that we have been around for so long brings us opportunities we never have before. We’re getting offered by really cool festivals that i think probably wouldn’t have approached us before and it’s a question about credibility, but certainly when you make your mark and you prove your point after 15 years, people kinda have to admit there’s something there.

SR:Have you been listening to any up and coming bands you could recommend?

Oh gosh, that’s a very good question, it’s a difficult one as well.,cos you know what it’s a weird time since we’re making a lot of music right now, I’m kinda going back to the roots  and listening to older bands I’m kind of trying not to copy anything that’s , god ah you got me there, I’m not listening to a lot of current music, I’m gonna sound like a dinosaur.

But, aha, Sleeping With Sirens, they definitely grabbed my attention, August Burns Red they are not necessarily up and comers, but they’re not old as well i think they are a great band. I’m always following from the guys from All Time Low are doing; again not newcomers, but those bands are more current than i’m listening to.

Hah you know what I heard What’s My Age Again and god that’s a good song, that’s a really good song, I played it on Tv on a show in Montreal and I was like…. really that just hit the mark.

Make sure you catch Simple Plan on their No Pads, No Helmets… Just Balls anniversary tour starting this week!