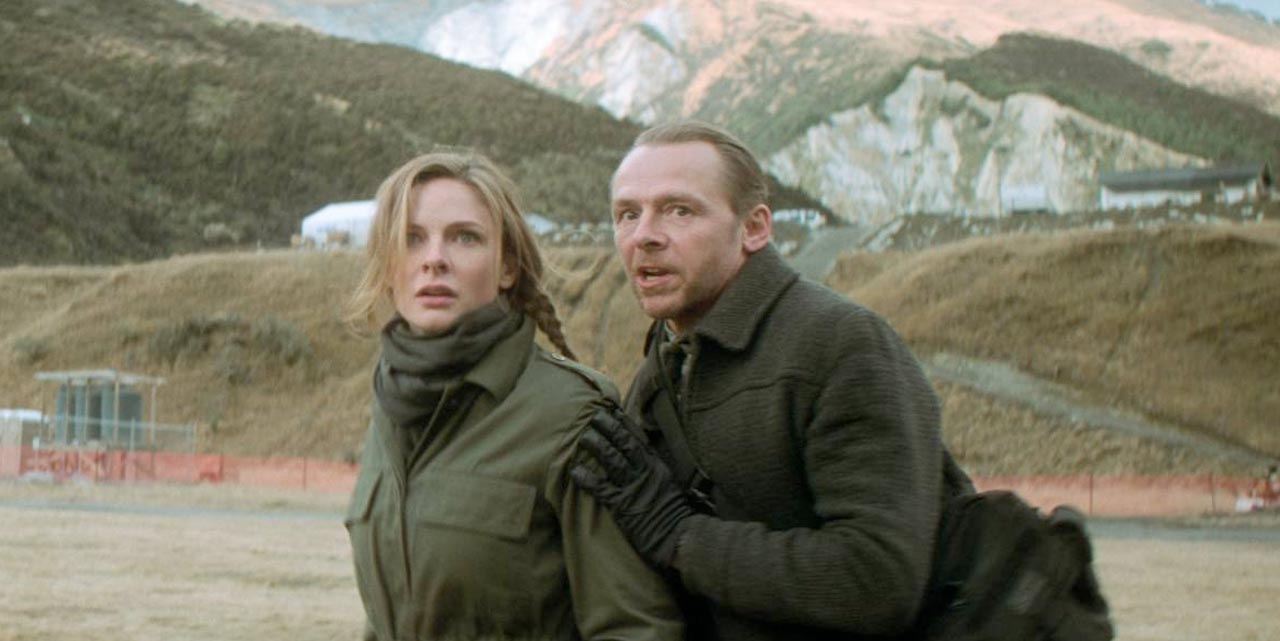 One time on a Mission: Impossible set, Simon Pegg got punched square in the face, because his timing was so bad. “And I don’t mean my timing of a punchline,” he deadpans. “It was a fight sequence, actually.”

Other than that unfortunate incident, Pegg’s experience over four movies and 12 years has been one he describes as “an absolute insane blast”, that has seen him form a close friendship with both its leading man [Tom Cruise] and producer [J.J. Abrams], two relationships that have “genuinely changed my career, and life”.

In return, his portrayal of Benji Dunn, the tech nerd turned field agent, has injected the series with an arch sense of British wit, and given Cruise’s Ethan Hunt the ultimate straight man to play off. “Really, Benji is the eyes of the audience,” says Pegg, “who literally says what they are all thinking. Which is basically, ‘He’s not really going to jump out of that, is he? Oh God, he really is…’”

You’ve said before that you “looked like a potato” in Mission: Impossible III. And now, four movies later, the rumours are that Tom [Cruise] and Henry [Cavill] nicknamed you ‘Six-pack Peggles’ on set?

Yes, I worked out a lot for this one. And Tom and Henry massively took the piss out of me, and I was massively thrilled that they did! And my wife loved the six-pack, too.

Of all of the characters across the franchise, yours has had a great arc – from deskbound tech support to fully-fledged field agent. How did that happen?

I got an email one morning, a year or two after Mission: Impossible III, from J.J. [Abrams]. Which just said, ‘How do you feel about Benji being an agent?’ It was classic J.J., like when he emailed me and said, ‘Do you want to play Scotty in Star Trek?’ You know, ‘Of course!’ From each movie since, Benji has got slightly more adept. In Fallout, his capability and skillset have solidified, and he’s much more assured, and a bit braver, if not more reckless. But, at the same time, he’s still the most ordinary guy in the team. He is the audience’s point of view a lot of the time, about how crazy all this stuff is. And he’ll always be Ethan’s biggest fan, will always look up to him. For Fallout, we came up with this idea that Benji would be wearing slightly smarter suits, because he wants to be like Ethan. But always in his own way… Which is not quite so smooth.

With Chris McQuarrie coming back as director, and so many of the cast returning, too, is this going to be the best Mission: Impossible movie we’ve ever seen? It does feel like that. Mission: Impossible has found its true identity, which is an incredible place to be. We’ve found ourselves at a point where we can have a story like this – which is about the consequences of 22 years of Mission: Impossible. And I love that McQ came back. People make a lot of the fact that each previous instalment had a different director, and that has always been a key part of the series. But with the last movie it really felt like everything was in place, that we’d found our sweet spot, and it seemed a shame to jettison that cohesiveness for the sake of tradition. We felt like we’d reached the perfect formula so it seemed a shame to throw it away.

Where do you sit on the stunts? Do you fancy doing a massive one yourself at some point?

The mantra on set is always ‘Shoot to thrill’, so we’re always doing our own stunts and fight scenes, which in some ways are just as dangerous. I got punched in the face, just because of some bad timing. And I don’t mean a badly-timed punchline! If it comes up, maybe. I mean, Tom elects to do it. If someone said to me, ‘Okay, you need to learn how to fly a helicopter and then nearly crash it,’ I would say, ‘No.’ But we are so looked after on that set. Even when we’re doing the crazy stuff, even though it’s incredibly exhilarating, it’s never scary. It’s like being on a private rollercoaster, with Tom Cruise driving it.

What big sequences is Benji a part of in Fallout?

My favourite was driving a twin-engined speedboat through the canals of Paris. That was insane, to have that moment, me and Ving [Rhames], with the wind in our hair… [Laughs] Okay, so maybe it was just the wind in my hair!

What effect did Tom’s broken ankle have on the movie?

Obviously, for Tom’s sake, I’d much rather it hadn’t happened. But, in some respects, it actually worked out quite well because it gave us a moment’s pause. We were working at such breakneck speed that it gave us a breather, for McQ to take stock of what he’d got. And then, when Tom got better, in that ridiculously short amount of time, we were able to hit the ground running… [Laughs] As it were!