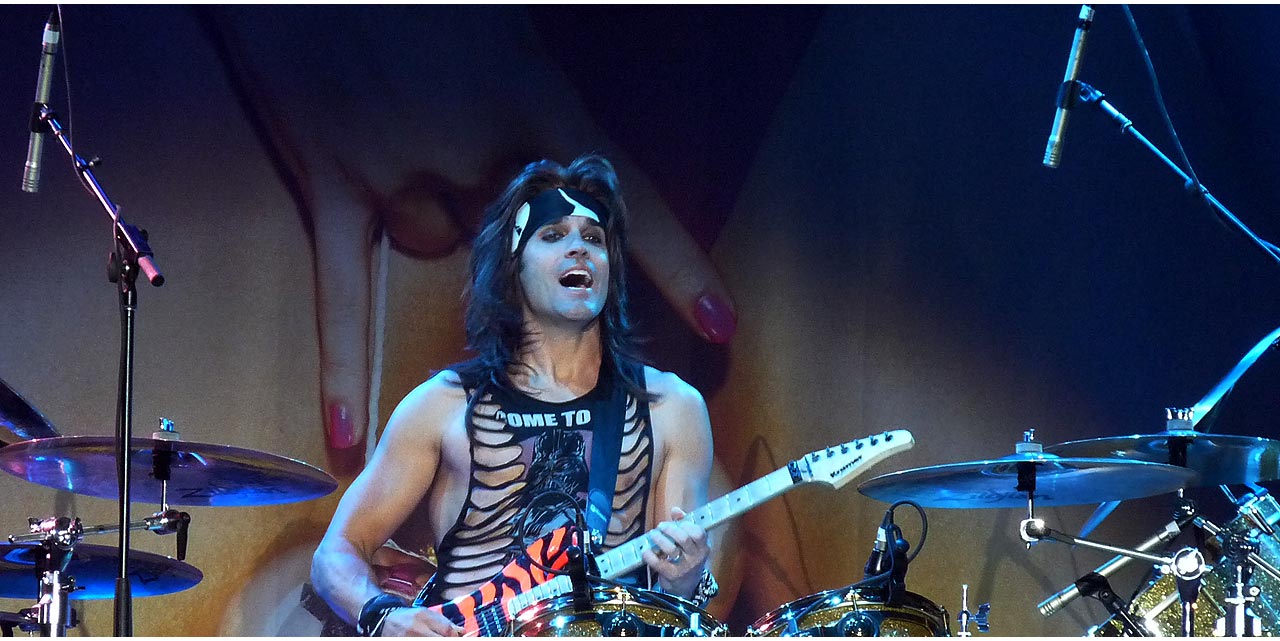 Ah, Steel Panther. Glam pisstake artists extraordinaire, funny buggers, and, actually, really ace musicians. When they hit the music scene back in the early noughties, audiences didn’t know what to make of these shameless pranksters with their outrageous vanity and profanity-laced lyrics. It didn’t take long for the world to get on-board, see past the schtick, and start seriously lapping up their unique brand of 80s metal revival.

Renowned for their energetic, hilarious, and absolutely rockin’ shows, the boys are heading back Down Under as part of Soundwave XV. If you missed their last Oz tour, do yourself a favour and go and catch some brash, ballsy, badass riffing and have yourself a blast! Thanks to the kind folks at Soundwave Touring, we had a great chat with that sexy, pouting guitar demon, Satchel, and gained some insight into the wild and crazy world of Steel Panther.

SR. You’ve just finished a tour with Judas Priest and now you’re coming with them to play at Soundwave, how was that experience?

Satchel. It was awesome! I’m a huge Judas Priest fan, they’re living legends you know so they were so cool to have us on their tour.

At first I was a little bit nervous but they made us feel right at home and second night we were there, we went back stage and partied with them, we smoke some weed, and do drugs in general with them (laughs); those guys really know how to party, and by the time we’d finished we felt like we were pretty good friends with them. I’m excited to see them back in Australia, it’ll be neat.

SR. We were expecting you guys to do a sidewave together, however you’ll be doing that with Slash and when that was announced, many fans were asking whether you and Slash would do a guitar battle on stage?

Satchel. Well, I’m not going to do a guitar battle with Slash because he’s like really super dooper good at guitar.

First of all, I don’t want to lose the guitar battle because that would suck, so the only way to not lose for sure is to not do one. Plus, if I win, all of the Slash fans would want to kick my ass. I think the best bet is for Slash and I to just stay as far away from each other as possible because that way no one will know who’s better.

Let’s just assume he is a much better guitar player than I am, he’s been doing it a lot longer than me.

SR. You guys are pretty much Australians by now, you keep coming back all the time and I assume this country is starting to feel like your home. How do you feel touring Down Under has helped the band to get where it is now? Satchel. We’ve got legions of fans in Australia and the first time we came down there, I was just blown away about how many people knew who we were and wanted to see us and rock out to us.

We’ve been down there a few times now and they’re dedicated fans. I think our latest album “All You Can Eat” got to number 2 on the charts down there, so that’s awesome.

SR. There is something special about you guys, as it doesn’t matter how big you are now, you still remain humble and close to your fans, meeting and stopping for them everywhere. How important is the fan base for Steel Panther?

Satchel. Well, without the fans we wouldn’t be rocking so for us the fan base is everything, we call our fan base the “fanthers”. We love them and we love the fact they come to our shows.

It’s easy for us to be humble, when we’re not on tour Michael still delivers pizza and I work at the UPS store down from my house, so it’s easy because we don’t have a lot of money.

It’s easy to not be a Rockstar, and we’ll still love our fans even when we get rich.

SR. The Steel Panther live shows are one of the best in the world, and you guys always reinvent your shows. Will all these new shows at Soundwave 2015 and Sidewaves be different than the previous performances Down under, or you guys will stick to your signature formula?

“…I think the next Steel Panther record might have about 3 or 4 more songs just about Kanye West.”

SR. “All You Can Eat”, is another instant Steel Panther classic, certainly had a huge reception world-wide. As usual the lyrics are very controversial, and you guys always say it’s about real stories. So, have you tried “The Glory Hole”?

Satchel. Yeah, well I mean, all the songs on the Steel Panther records they’re all basically true stories. Everything we write about happens to someone in the band on a regular basis.

There is a glory hole right down the street from my house, and I go there all the time. It’s really cheap and I don’t know who is behind the hole but it works great every time.

Other songs we have like Gang Bang at the Old Folks Home for instance – a lot of people think we make this stuff up but the truth is Michael delivered pizza to an old folks home and he ended up being in a gang bang, that kind of thing just happens in people’s lives, we just happen to write songs about it.

SR. Michael told me in a previous interview that he would love to take Ron Jeremy on tour to organise the after parties for Steel Panther so who would you like to take on tour with you and why? SR. “Death to All But Metal” is like one of the anthems of the band, but today with all the crappy pop stars currently on the charts, if you could rewrite that song what names would you put in it and why?

Satchel. That’s a good question because there are so many shitty bands out there now. If we added all of them that song would be about 15 minutes long. But it’s interesting because I was just thinking about that today.

SR. And one of the video clips should be a parody of him and Kim Kardashian on the motorbike?

SR. Maybe with Stix and Lexxi as Kanye and Kim riding a bicycle together?

Satchel. That’s would be the funniest sh** ever…If we do it, we will credit you for that! (laughs) SR. Also when I spoke to Stix a couple of years ago, he mentioned an Aussie celebrity he’d like to date or take to his room, who would you like to take?

Satchel. Seeing as it’s Australia, I should pick an Australian. I’d pick Olivia Newton John, I wanted to have sex with her when I was younger.

If I could take her to my room, I’d put a picture her character in Grease on my nightable, while we are doing it!

SR. Speaking about fans I assume you’d have plenty of stories involving crazy fans. So could you share with us a top story?

Satchel. There are so many crazy fans that we have, so many! There was one fan on our last tour on our last tour in November and it was pretty cold and she was hanging on to the back of the tour bus on the bumper. She wanted to go to the next town so she just clung onto the bumper for like 8 hours. She got frostbite on her fingers but she made it to the next city and she was rocking out. I think they had to amputate her fingers but she said it was worth it.

It just goes to show how good Steel Panther is- worth losing her fingers!

SR. Many people would do anything to see you guys live. You have a very dedicated fan base here, so would you like to send a message to your Australian fans ahead of Soundwave and the sidewaves?

Satchel. Yes, I want all of our Australian fans to know the Steel Panther is going to rock their balls so incredibly hard that they’re going to cruise all the way up into their abdomen! So, you should make sure that you know where your balls are at all times. And if you’re a girl, we’re going to rock your tits so hard they’re going to like wrap up around your neck. That’s the only message apart from bring some drugs.

For tickets and more information head to: