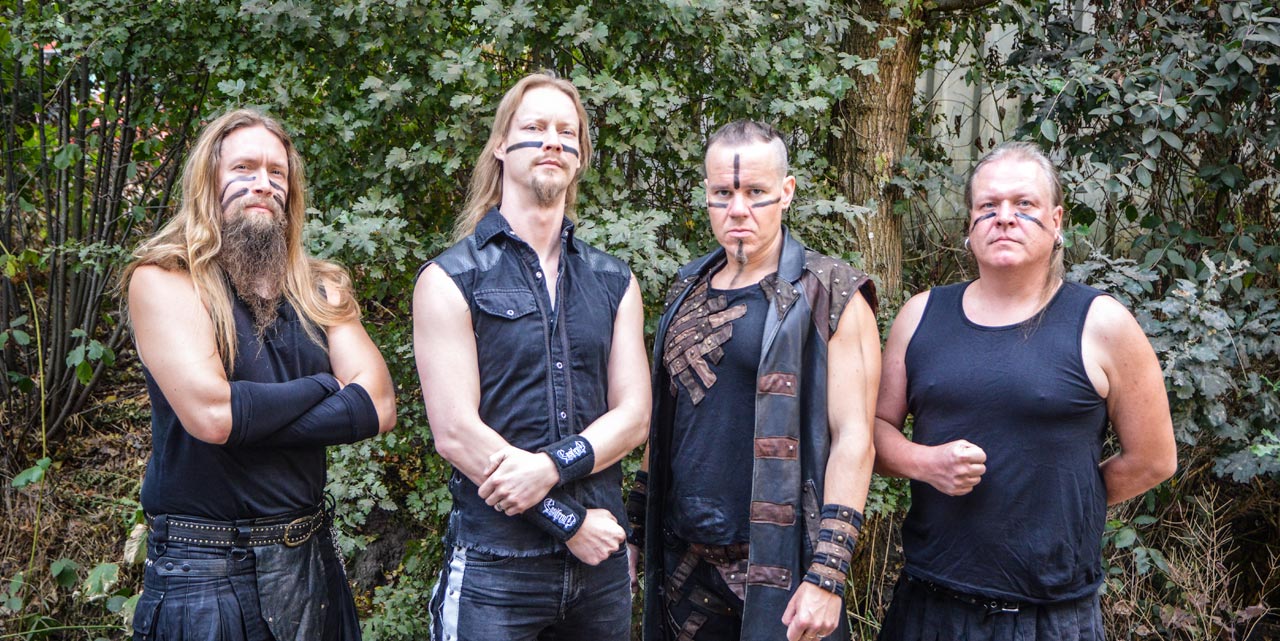 This time we caught up with Sami of ENSIFERUM the main man on bass guitar in the unique and ever-so cool Finnish Folk/Metal band. The hours are counting down until they are here on Australian soil to perform in Brisbane, Melbourne and Sydney for 3 huge, back to back nights!

SR: We’re here to chat about the impressive melodic folk Metal band you’re as key member of; ‘ENSIFERUM’ so what’s been going on man!?

At the moment were in the middle of the touring cycle with the new album called “Two Paths” we just did like 5 weeks touring North America and then we did this ‘Seven thousand doors of metal’ which was a cruise in the Caribbean, Then we did 3 shows in Mexico, but yesterday I had a day off and today I am doing tons of interviews in Australia where the band will be playing very soon! It’s been busy, busy, busy!

SR: Of course you are here for the ‘Path To Glory’ Australian Tour, will that be the band’s first time over here?

No we have been in Australia a few times, but it’s been many years now. So it’s a pleasure to come back here again.

SR: What’s been the biggest change in the band since you were over here in Australia last?

As I said, it’s been many years, so a lot time really flies.

SR: You were originally the bass player in the band but also are quite the talented lyricist, you’ve over those years, become a singer in the band.

Well we have clean parts, and we have harsh moments in our songs too. Me and Markos, the father of the band, we are doing the key vocals, the choir parts and so on, but Petri does the harsh vocals so it’s definitely nice, especially in live situations because then nobody has to scream there lungs out for like 90 minutes in a row. It’s good to juggle the responsibility a little bit.

SR: It’s a very divided role then and especially with the new album, you’ve really kind of nailed that even split on the vocals and the other sounds therein.

Yeah, and it’s a nice asset for the band that we can combine as many multiple elements as possible also in the vocal section. It might be weird for some other bands but for Ensiferum it’s great, we like clean vocals and choir parts more than just harsh vocals all the time it can get a bit much.

SR: You are still playing the bass guitar in the band, I wanted to ask you if you have been using much new equipment in the way of pedals and amplifiers.

On Two Paths I used just a distortion pedal with what I think might have been my old Sensheisser. Nowadays I have been using a brand called Dark Glass and my rig is really simple, in live situations I don’t even have an amp on stage, I just have the preamp and that’s it. All sound engineers love me because of that, I don’t have my huge Ampeg on stage or anything, so the stage volume is much lower, for most sound engineers it’s very nice to mix.

SR: That would make it easier for them. And so what brand name instruments do you prefer to use?

I have been using Ibanez for a long time now mostly, perhaps about 10 years now or something like that. When I started playing bass at the age of 11. Ibanez was my second bass that I ever bought. I had quite short fingers, being a bass player. Ibanez really just fits me very well. The neck is narrow and kind of fast as you would say. Warrick I really love the sound, but they are a little bit bigger, so for my quite short fingers Ibanez suits much better. Now I’ve found my kind of perfect tone. With Ibanez combined with Dark Glass distortion. I’m very pleased with my current sound.

SR: Where are you heading after Australia

There’s a tour in Russia planned. We just finished the North America tour, also North America is quite a big continent so we’re already planning to go back there. It’s very busy at times. I have another band, we’re just mixing our first album now, it’s power metal / heavy metal. The band is called. “METAL DE FACTO” and that keeps me personally even more busy. The plan is to tour with that band after.

SR: Where do you draw your main inspiration from?

I read a lot and I love movies and so on but usually like, the sparkle comes from real life. It’s always a very cool challenge to try and find metaphors that fit that idea. Lyrically for me it’s very important that the original idea is still there and it fits into the Ensiferum world. Especially because English is not my native language. I love the challenge of trying to find new metaphors and to expand my vocabulary and so on it’s a lifelong process to become better on this one, which I really like.

SR: So how do you go about finding those metaphors.

It just happens, it really does. That’s really hard to answer. There’s no simple method to do it. I usually have tons of raw ideas. Sometimes it can be as little as one or two words, sometimes one or two sentences. But I learnt from Two paths, nowadays that we actually wait for everybody to bring ideas and then we sit down together as a band and arrange everything which is really cool but it takes a lot of time and there’s always a risk that you tear apart what you just built and start from scratch and that until the song is like set in stone. But anyway, I learnt my lesson, I don’t start writing the final lyrics until I know the song is 75 percent ready. Otherwise you might end up like writing a chorus and forget about doing choirs and harmonies and rhythm. You can have everything all planned and then have to tear it apart.

SR: What would you have to say to your fans that can’t wait to see you over here in Australia?

Well the feeling is mutual, we can’t wait to get over there and rock with you! What you can expect is we are going to play a few songs from every album, including some rare stuff from old albums. Expect a surprising set list featuring hits from all 7 albums, a combination of songs new and old.

Don’t miss ENSIFERUM in Australia for 3 dates ONLY! Be quick, tickets are selling fast!

Get your tickets here: hardlinemedia.net/tickets