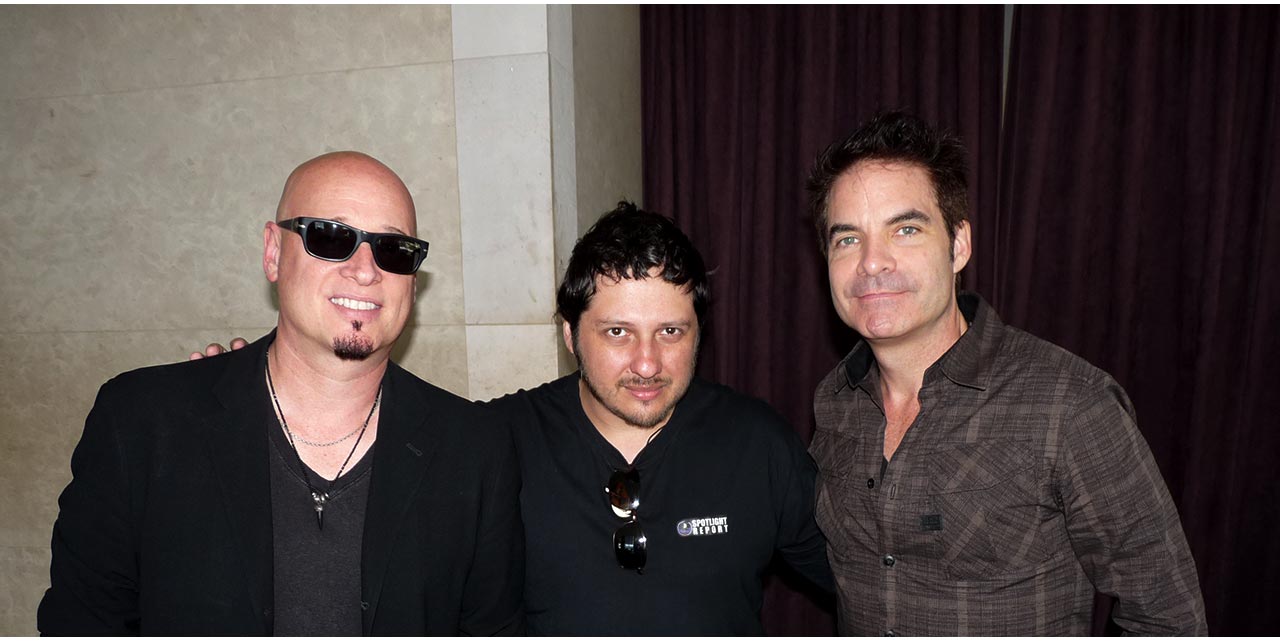 Grammy award-winning band Train recently visited our shores to perform at the NRL Grand Final and at Sunrise on Channel Seven, to promote their latest album ‘Bulletproof Picasso.’

Thanks to Sony Music Australia we had the chance to sit down for a chat with the band’s frontman Pat Monahan and guitarist Jimmy Stafford, in order to find out more about about their new album, their friendship with Delta and INXS, touring Australia next year and much more.

SR. You guys just played in front of a record crowd at the NRL Grand Final. How was that experience? The funny thing is the day before at rehearsal they didn’t practice with all the pyrotechnics and stuff, so when we were playing we were not really prepared for when the explosions starting going off. It was a lot of fun playing that gig.

SR. Were you guys nervous before jumping on stage at the NRL?

Pat. I always get nervous at sporting events, because people are there to really see the game, so you can really blow it, you really can make a mess of it if you don’t do a good job.

When you finally jump on stage and start playing with your band it feels right, less nerve-racking and you start having fun.

SR. Slash also played a solo at the grand final. Did you guys have the chance to have a chat with him?

Jimmy. We talked to him a little bit right before we went on while standing at the tunnel.

We run into Slash every once in a while actually. He is a nice guy, and I think he should have been more nervous than us as he was playing by himself.

SR. Train is heading back next year to play at Blues Fest, Sydney and Melbourne. What can you tell us about that tour?

Pat. I’m not sure if this tour will be different or not from our previous visits. We have been playing our new record ‘Bulletproof Picasso’ and our fans around the world think it is our best work. The real difference from previous tours will be the songs we will play. We are still the same. Actually, we are not the same band as before as now we have two beautiful backup singers and a new drummer. All of these give us a new life and make us a better band than we used to be.

Who knows, maybe Delta will come along and sing with us again, or maybe Andrew Farriss from INXS will join us to play some INXS songs.

Jimmy. Last time we played the Opera House I don’t think we knew what to expect, because you know it’s more like a theater vibe, so I think we will be better prepared this time and be able to use the full potential of the place.

SR. Following up on that. Many artists said that playing at Sydney Opera House is at the top of their wish list and you guys will have the chance to play there again soon. What do you guys remember about the first time you did a soundcheck there?

Jimmy. It’s weird, I mean we just played Radio City Music hall in New York and it kind of has a similar feel to me. It’s like a more formal place to play compared to a concert arena. Opera House is a beautiful place to play, it has so much history, and going inside the building was a unique experience after seen it so many times from the outside you know. I’m really looking forward to have a second go in April.

SR. Delta joined you guys on stage for the California 37 tour back in 2012. What can you tell us about working with her, and when this friendship started? Pat. I became friends with Delta years ago when she heard ‘Drops of Jupiter,’ and she was pretty young, I think she was 19 and she had just gotten through with Leukemia, and we wrote a song together and became friends.

In this business of music, a lot of artists are not approachable, because they have insecurity and self-esteem problems and Delta is not that way. She is a really lovely human being, and that for me was pretty clear very quickly.

I just love being around her. I have a podcast, and just got her on my podcast not long ago; it was great to just catch up in Los Angeles. I know she is always between Sydney and Los Angeles, so it’s great to see her once in a while.

Our Relationship with people like Delta and also with The INXS guys comes from music, and we are lucky and grateful of still doing this, because we get to meet great artists and great people that we can call friends.

SR. Speaking about your new album ‘Bulletproof Picasso,’ the fans have been hailed it as one of the best albums of the band. What’s your personal perception about the reaction of your fan base. Do you feel fans are getting more demanding?

Pat. I think musically speaking; this album is a step forward on the direction we want to go in, it’s more legitimate, less cute and pop, with a more mature songwriting. Definitely has better songs, and our fans world-wide are saying it’s our best album. That’s what really matters.

SR. Train is also known for songs that have become part of our pop-culture. For example ‘Calling All Angels’ is the unofficial theme of the Los Angeles Angels of Anaheim baseball team, while here in Australia ‘Hey, Soul Sister’ became not only a song featured in some TV shows, but also a must sing and play in every single camping or road trip. How do you guys react when you heard your songs played in so many different places and situations?

Pat. I think it’s an amazing gift. Many artists might never see their work so alive in so many ways; however, I’m sure there are a lot of people really tired of us by now, and personally I don’t blame them, because if I heard a song playing so many times everywhere eventually will make me crazy. That’s what usually happens, when a song do well you are forced hearing it more than you want to. On the positive site, this adds a little bit more of joy to your life and it’s a pretty great trade. For Example, when we go to Hawaii, there are a lot of live music performances everywhere, in every hotel, bar, beach, everything is outside as well, and there are different variations too, there are a lot of guitars, Ukuleles; and you know, we hear ‘Hey, Soul Sister’ every place we go and it’s really lovely, we feel honoured, it’s a great gift for us.

SR. You guys are huge INXS fans as far as I know. What other Australian bands personally influenced your careers?

Jimmy. You are right; I’m a huge INXS fan. I also have to say AC/DC, because that’s how I learn how to play guitar when I was young, so I owe everything to that band. I’m happy to hear they are releasing a new album, but also sad about Malcom, and I wish him a speedy recovery.

Pat. I have to agree with Jimmy. I love those two bands. INXS are a huge influence for me. I always wanted to make a record like ‘Kick’. It’s funny because when you read or talk to the INXS brothers about it, their record label offered a million dollars to record a totally different album at that time, because they believed there was not much they could do with a record like that, as it was not really pop music that they could sell easily, and then it became their biggest, best work.

It’s curious how things like that happen, like in ‘Bulletproof Picasso’ the first song that was released around the world was ‘Angel in Blue Jeans’ and it did not make an impression as big as ‘Drive by’ did a couple of years ago, but I think this album might end up being our kick.

SR. How has been working with Drew Shoals on the drums so far?

Jimmy. Drew is awesome. Actually, speaking about INXS, I want to share something involving him, as when we were backstage at the NRL the other day waiting to play, we started talking about INXS, and he (Drew) was not really familiar with them, so we start listening to the ‘Kick’ album and he started going nuts about it.

Drew, as a drummer, as a human being, as a friend, and as a part of the Train family is amazing. He brought a new nice fresh dimension to the live show too.

SR. Speaking about your live shows. One thing that particularly grabbed my attention when I saw you playing at the Opera House in 2012, was the fact that you are the first band I have ever seen taking selfies with fans and signing autographs while performing. Was that something that came out spontaneously during the show or you planned to do that before hand? Pat. (Laughs) I think it all started spontaneously because when I went out into the crowd and sing ‘Marry Me’ everyone had their phones, and I wanted to grab them and showing what it feels to have a phone in your face. It became so much fun doing that, so we started getting pictures and I became pretty good at taking selfies to be honest (laughs).

SR. We always ask this question to our guests. Can you share with us any funny or weird story involving a Train fan while on tour?

Pat. We have terrible stories, that we can’t share (Laughs). Actually, we have an Australian fan, which drove 11 hours just to see us play at Sunrise yesterday. It’s really moving, when you see that level of dedication with fans flying to other countries or coming from different cities to see us performing.

I think we have created a fan-Family. Actually, we should patent the concept of “Fanily” (Laughs). We kind of have been growing and knowing each other during our more than 20 years as a band. We have heard of people here in Sydney with friends in Scotland who comes here and stays with them when we tour Australia, it’s just impressive knowing we created that environment. We are really grateful.

Jimmy. You know, we also do a Cruise every year in February, so all our crazy fans can get on a boat with us for five days and sail around the Caribbean, alongside other bands, chefs and comedians that we bring along as well.

SR. Just to finish. Would you like to send a message to your Australian fans?

Pat. C’mon Jimmy send a message, you know you want to (laughs).

Jimmy. If you haven’t gone to any of the Train cruises you should. Seriously, if you want to join us and travel around the Caribbean in February, visit www.sailacrossthesun.com, as a warm-up of our visit to Australia in April.

We are very looking forward to come back here, we love our Australian fans, and we hope you love our new album ‘Bulletproof Picasso’ as much as we do. See you soon!