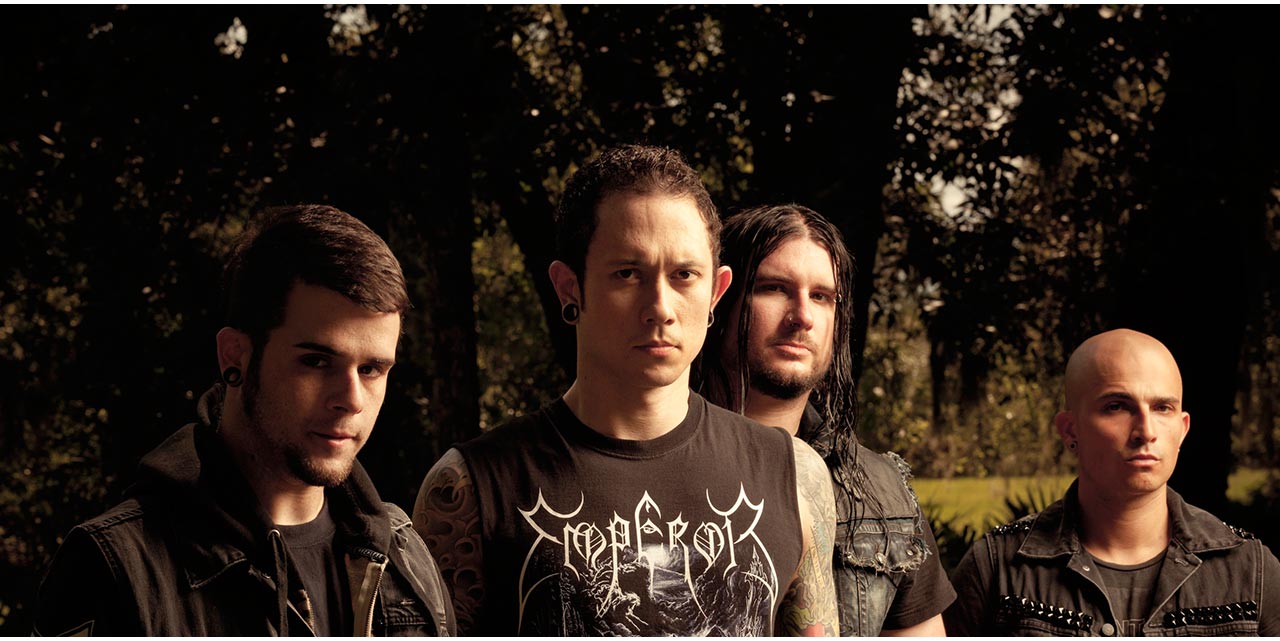 Metal heavyweights Trivium are heading back Down Under to play a huge headline tour alongside the mighty In Flames, already selling out Melbourne, forcing the band and the organisers to add a second show in that city due to high demand.

Thanks to Soundwave Touring, we had a chance to chat with Trivium’s iconic bass player, Paolo Gregoletto, about touring with In Flames, his opinion about the new Soundwave format, Australian fans and much more!

SR. What can you tell us about the chemistry between Trivium and In Flames while on tour?

PG. We’ve done so many tours together that we’ve become very good friends . Not only do I think our bands fit very well together but offstage there’s definitely a great bond between us. Looking forward to it and it’s a great pairing and in sounds of music lovers of metal in Australia it’s a must see tour.

“We have a great fan base there since the first time we came down for Big Day Out in 2006.”

SR. How will the show be different from other shows you have done in Australia?

PG. With a headliner we can add a lot more into the set that we wouldn’t have time to do on a show like Soundwave. It allows us to pick some more obscure shows to throw in there that people have been waiting for us to play for a long time. It’s been 5 years since our last headliner.

SR. Speaking about your previous visits, you guys played Soundwave and you also toured with Slipknot and Machine Head in 2008. How different is the reaction from Australian audiences to the rest of the world?

PG. We have a great fan base there since the first time we came down for Big Day Out in 2007. Its just grown from there. We’ve had a loyal following. It’s always been one of our most energetic crowds. Australian fans are awesome. I think the fact that Soundwave has become one of the premier festivals in the world says a lot about the audience down there

SR. Are you aware that Soundwave is now 2 days? It’s a new format! SR. Your latest album is Vengeance Falls has a really positive feedback world-wide. How many songs from the album are you guys planning to play here?


PG. It’s definitely not going to be the majority of the set but we will play a few. We will have to figure what to swap out from what we played at Soundwave for something else.

SR. How has it been working with Matt on the drums?

PG. It’s been great We’ve known Matt for 10 years, he was a drum tech so in a weird way its kind of like an apprenticeship. He kinda got to know the ropes touring with Trivium and we know how he is as a person. He knows us. It’s a big thing for us. Were a close knit family, tight with our crew, our management, and our label.

Beside for the drummer changes we’ve had a consistent group of people around us and a lot of what we do we want to have good people around us and people that enjoy being around us. Getting to know him over the years has been great and the fact that he’s a great drummer is awesome. I feel like the last couple of tours we’ve done are some of our best and most fun and best we’ve ever sounded. I’m excited to get back to Australia and I’m glad to do it on this record

SR. As a headline show how many songs are you planning to have on the setlist?

PG. I’m not exactly sure yet. We have to find out how long the set is. There’s going to be much more songs that’s for sure. Much more than Soundwave

SR. Are you guys flexible? You change the setlist depending on the city or you keep the same set?

PG. We usually keep the setlist the same. If we were in a position where we could rehearse every day at the venue we would be open to changing things up but if we can’t do sound-check, etc, we like to keep the show pretty tight and pretty together and know what we are doing ahead of time. It makes thing flow a lot better.

“I’d love to tour with Iron Maiden one more time

SR. What can the fans expect in regard to your mates from In Flames. Would you come together to jam on the stage this time?

PG. I don’t know. We haven’t talked to the guys about it. I’m curious as to what we could all do together. Maybe we will do something fun.

SR. What is your number one top memory while touring Down Under ?

PG. One I always remember is the first time we ever played in Australia for Big Day Out in 2007. You have no idea what to expect coming to a country for the first time. We got out there and fans were chanting our names and the vibe was unbelievable. It was crazy.

SR. Are you guys working on any new material?

PG. Yeah, we’ve been writing a lot. The last 6 or 7 months we’ve really ramped up writing and collecting ideas. Going through old ideas that we bring back and try again. Just at the moment we’ve been having this break and taking it to reflect on what we’ve written and what we are going to do next, where we will record which I’m pretty sure 100% it will be in Florida again. Figuring out who we want to work with and what we want to achieve with the next record.

SR. If you could choose any band in the world to tour with, which band would you choose and why?

PG. I’d love to tour with Iron Maiden one more time. We had the privilege of touring with them in 2006 in Europe. Maybe another tour somewhere else like South America cause they’re so big there. We could play the show then get to watch them that would be awesome.

SR. What can we find backstage at a Trivium concert?

PG. Nothing too over the top. Corey’s got his bottle of vodka, Matt has an assortment of things of Brazilian Jiu-jitsu, a case full of stuff to train on tour, and I have a bike I bring with me in the States.

We’ve been told we have the cleanest tour bus, almost every time we have an interviewer come up. That’s our claim to fame; we are a pretty clean band.

SR. Would you like to share with any funny or weird story involving your band on tour with a fan.

PG. I still think to this day one of the most interesting requests was someone bought their newborn baby after the show, late, like 11 or 12 at night and they wanted us to sign the baby and we were all kind of like “I don’t think we are going to do that but we will take a picture of the baby.”

I think we still have some pictures of it, the baby’s crying, it’s pretty funny and awkward. There’s never a dull moment on tour, aside from sitting on a plane for 14 or 15 hours.

SR. Would you like to send a message to your Australian fans for your upcoming tour?

PG. Thank you to everyone that has been hounding us to come back to do a headline tour. Without that kind of support the tours can’t get off the ground and we are really excited to come down with In Flames. Huge influence on us, great guys, I think its going to be one of the tours that you have to see this year. So, thank you once again.