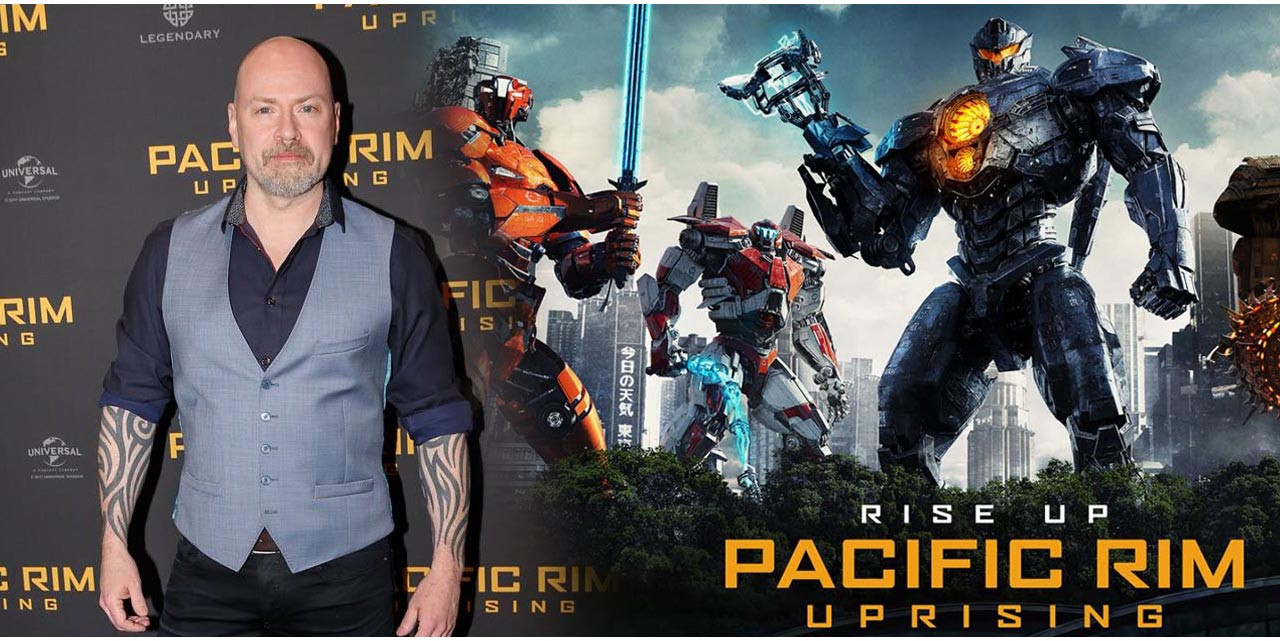 ‘Anyone can be a hero’

It’s challenging enough to take on your feature directorial debut but when you’re following in the footsteps of Oscar winning visionary, Guillermo Del Toro, the pressure is all the more palpable.

And while Steven S. DeKnight may not be a household name in the world of feature films (yet) if his latest project Pacific Rim: Uprising is anything to go by, he will be soon enough.

Here we chat to the fledgling feature director about his transition from the small screen to the big, following in the footsteps of a giant and the expansion of the Pacific Rim Universe.

SR. This is your first feature length credit as a Director. Was there a lot of pressure taking on a sequel, especially one that Guillermo Del Toro had indelibly put his stamp on?

Oh massively so. Mary Parent and I were working on what was supposed to be my feature directorial debut, a little $10 million dollar movie I wrote – a psychological thriller, very Hitchockian basically three people in a house was the entire movie. Then she called me up out of the blue one day and said ‘what do you think about Pacific Rim 2’ and I said ‘well it’s a little bit bigger than three people in a house’.

I had been a huge fan of Guillermo’s since I saw his first movie Cronos and I have seen all his movies multiple times and have gotten all of his books about the making of his movies and…his collection of memorabilia at Bleak House. So the prospect was very daunting. But I just dove in – I had to go through a series of approval processes, and meeting Guillermo and getting his blessing was the final step, and I got to sit down and talk to him and anyone who has ever talked to him will tell you that he is incredibly warm, incredibly supportive. He told me ‘look I’m going off to do prep for my passion project, The Shape of Water, but I’ll be here whenever you need me otherwise I’m going to stay out of your hair – this needs to be your movie, take it in the direction you want to take it’.

To have that kind of support from a genius like Guillermo was a real confidence booster.

SR. One of the subjects that has been discussed in the media is the different direction that you’ve taken the story to what Guillermo would have. How did you manage this while staying true to the spirit of the original?

I love the original. I thought what Guillermo did was brilliant – I saw it in 3D when it first came out and have seen it many times since then. The way I attacked this…I attacked it in a very TV way as most of my career has been spent in television. I put a room of writers together – half of them were TV writers and half of them feature – and I had a general beginning, middle and end in mind and we sat around for two weeks and argued and wrestled, and fleshed out the story.

It was always very important to me that this wasn’t a…not quite a sequel not quite a reboot it’s something in-between. What we wanted were the elements from the first movie and I wanted to set it 10 years later so that we could advance the storyline, the technology and the characters. I  wanted to keep what Guillermo did in the first movie, and use this movie to expand the universe to flesh it out, to circle back to the first and explain some things and also deepen the understanding of what the aliens on the other side of the breach were actually doing.

“…I grew up watching TV series like Ultraman, The Space Giants, Johnny Socko and his Flying Robot, all of the Godzilla movies, the gamma movies and the classic men in suit movies…”

And not in that overly jokey kind of way. But it had to have characters that were engaging and ultimately a movie that has giant Mech’s fighting giant monsters really should be fun and that’s what we really wanted.

SR. How did you find the transition to a feature film?

It was very much like episodes of TV that I have done, just 20 times bigger. Everything is super-sized but when you get down to the nuts and bolts of what you are doing, It’s all about character, dialogue plot and then when you get to the directing side, the coverage err…the filming close-ups etc., everything is bigger.

SR. We see many of the old cast in this film but there are new and exciting faces such as John Boyega – tell us about the casting for Uprising? It’s an interesting story, when I originally started working on this project Charlie Hunnam who played Raleigh Becket was contracted to do the sequel, so we built an entire story around him and wrote a script for the Rayleigh character and I turned it in to Legendary and they really loved it. I went to bed that night thinking this was going to be a lot easier than I thought but when I woke up next morning -and I am not kidding you – I got up and got online and Charlie Hunnam had signed up for a remake of Papillion. I looked at the shoot dates and it was our shoot dates. And I thought – ‘well that’s not good!’

So then we had to scramble and we took the major elements of the story which were the same, what the Kaiju were doing and the plot points but we developed a new script that was centred on two new characters – a brother and sister – and we did an entire script like that. But when we looked at it and thought something was not quite right here. Then Mary Parent popped up with the suggestion, I think her and Guillermo were talking, about the son of Stacker Pentecost and we all thought that was a really interesting idea and started to break the story.

We were about half way through writing the script when Mary again got the idea for John Boyega and my first reaction was ‘ John Boyega is not going to do this…he’s in Star Wars’. But Mary in a classic Hollywood maneuverer, said that John was coming in for a general meeting so she had a conference room filed with all of the concept art we had developed for this movie, and walking through the office she said for him to ‘take a look at this little project were working on’ – John loved it being a big Anime fan.

So John signed on to it and we had to quickly finish the script to make sure it was good enough for him to really love it.

SR. One of the big differences with this movie was the age of the cast was considerably younger and there’s an idea that runs through the film that the youth are going to be the saviours of the future – was this an important idea to you? When I first signed on to the project they were keen at opening it up to a younger audience so, the younger generation of cadets was built in from the beginning under the idea that they are training to be the next generation of Jaeger pilots. After a disastrous sneak attack, the young kids are the only ones left to help John Boyega and Scott Eastwood’s characters save the world. It’s a subject that could not be timelier now.

SR. Another theme is that idea of mankind saving themselves, not relying on hero’s to fall from the sky and save us.

Yeah that’s what makes Pacific Rim unique and really resonate, is the idea that a Jaeger is you times a thousand and that was really important along with the idea that anyone can make a difference in the world. It doesn’t matter where you are from, who your parents are anyone can be a hero – those were two things that were very important to us in this movie.

SR. What films did you draw inspiration from for Uprising?

I grew up watching TV series like Ultraman, The Space Giants, Johnny Socko and his Flying Robot, all of the Godzilla movies, the gamma movies and the classic men in suit movies. I had always loved those and the chance to do a movie like this, which is not a man in a suit per se but it’s very, very high in visual effects, was a real dream come true. So I just pulled from everything I have ever watched, loved and worked on. And also the time I have spent with Josh Whedon and my experience with him and all that I learned.

SR. You’ve spoken at length about the Pacific Rim universe, is it possible that we’ll get a third instalment and, if so, what could we expect?

It depends on if the audience shows up for the second film. We do have a plan for a third movie and from the very start, when I was pitching this movie, I was also pitching the idea of what the next movie might be and the end of the movie pretty much sets up what the bulk of the net movie will be. I won’t ruin it for everybody but there is a very clear plan for the next movie.

SR. Finally, Sydney features prominently in both Pacific Rim films – what is it about the process of working in and with Sydney based talent Sydney that appeals?

It’s been a fantastic experience. When I did Spartacus I was in New Zealand and I always wanted to come over to Sydney but I never had the chance. So this gave me the opportunity to spend a good seven months here and I loved it.

When we were working on the story, I needed a coastal city to put the headquarters of the Pan Pacific Defence Core, to film a whole action sequence around. And when I considered everything and the locations – I really gravitated towards Sydney because visually it is exactly what I needed and it just felt like it was a nod to the first movie as well.

The first movie they shot mostly in Toronto and we looked at that and the weather was not quite right because it would have been winter. With a movie of this size, the right climate is so important and we already had a big action sequence planned in Sydney, so we thought why not just film in Sydney. And thankfully it all worked out so it was a really fantastic experience.