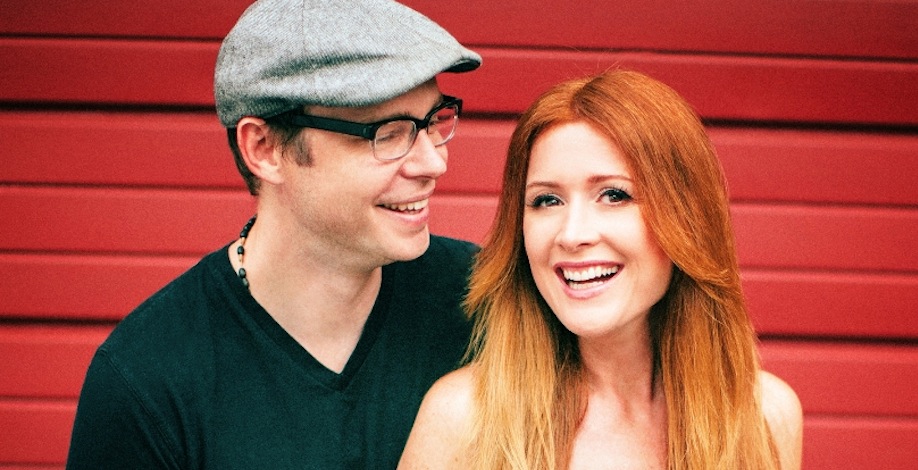 Country husband and wife duo Mark and Jay O’Shea, who go by the stage name of O’Shea, have had a massive impact on the country music world. These homegrown stars moved to Nashville early on in their career to be at the heart of country music. From their the couple have had great success collaborating with the likes of Steve Wariner and Midnight Oil’s Rob Hirst.

So your album ‘The Famine and the Feast’ is out now – so congrats. What can you tell us about the overall themes of the album?

It’s a record that focuses on love in general and the two extremes of that. You know The Feast is the falling in love part and The Famine side is all the more introspective and darker.

Yeah, as you were saying that it’s all about the extremes of love – do you ever find that writing honestly impacts your relationship?

Yep, I find that it does a lot of the time. I mean that in a positive way though. I think it becomes quite therapeutic, and substantially less than therapy. It’s a lot cheaper than counseling (laughs)

Do you think being married to your band mate changes the way your music is made in anyway? Yes, I do. I think it makes it more honest and I think it makes it more real in a lot of ways. Well, for us, anyway, not to say that if you are in a band and you are not married to each other than you don’t make honest music but for me personally being married and being able to do it with Jay we can put a lot more into the song and I guess in a lot of cases we can get a more rounded perspective. You know, you are able to get the female perspective on something, as well as the male but you are also getting this partner dynamic that goes into the songs that we write together.

So you have collaborated with a few artists on this album, obviously some being closer to you personally than others – but in general what have those experiences been like?

They have been really great. First of all, was with Steve Wariner. We wrote a song together and he was kind enough to come play guitar on it and featured in the video. We have been huge fan of Steve’s for years and he has a record called ‘Drive’ that was released in the mid 90s that I wore the CD out that the player was unable to read it. So that goes to show how many times I played it. (laughs) But he is really incredible and that was a real joy and privilege to be able to work with him.

And than secondly, Rob Hirst from Midnight Oil who is an amazing songwriter offcourse, one of the most prolific and profound that Australia’s got. That was an interesting collaboration and it came about differently. He had an existing track that he had written on one of his solo projects recently and he asked us to take a listen to it and see if there was anything on that project that we wanted to rework or collaborate on. One of the songs really stuck out to Jay it’s called ‘The Truth Walks Slowly’. So we did a rewrite on that and I added a chorus and changed some lyrics but we certainly took Rob’s concept and took lyrics and moved it in a different direction. It was really nerve wracking actually because we weren’t really sure, despite the closeness of our relationship.

I wasn’t really sure what he was going to say about it. Fortunately, he loved it and we all agreed to work on it together. So he ended up singing on the record as well.

Speaking of the Steve Wariner collaboration, I wanted to chat to you about the Bad Day Good video clip. I just wanted to say how much I loved those random acts of kindness in the clip – it is such a great idea, where did you come up with the inspiration for it?

Thanks very much. The reception for that video has been pretty crazy. It has had like 45 thousand shares on facebook and over a million views, which is crazy. The idea is kind of like a hybrid idea that we have kind of being kicking around for some time about different things. It was largely inspired for me by Sarah McLauchlan who has a video called ‘Hearts on Fire’ that was probably released about 20 years ago in the 90s, it was a slightly different idea but the whole concept of not just spending money on silly material things and actually taking that energy and put it to good use. So it was inspired by Sarah McLauchlan all those years ago and we just had the best time making it and it was actually the most fun we have ever had making a music video.

I think it depends what day it is and what time of day and how I’m feeling, I guess. That’s the thing with this record being so polarizing in its extremes. One minute you are thinking about Bad Day Good and the next second I’m thinking about ‘Sorry, I Was Right’ or one of those darker tunes.

So what do you think has changed in the creative process from making this album compared to those before that? With this record we wanted to make sure that every song we put on the album made you feel something and I suppose we tried that on previous records subconiously. But this time it was a real deliberate attempt. We wrote a song and than we’d play it and even if we had recorded some of them and we would put it on and listen to it and it didn’t make me feel anything than it would simply get crossed of the list. However, with that said, not all the songs had to make you want to cry. ‘Pray’ for instance makes me want to get up and dance, you know. So as long as it made the listener and myself largely feel like doing something. That became a huge component of this record. So that was different as far as the other ones go.

Yeah as you said the album really makes you feel something, do you ever worry about getting emotional while performing them on tour?

Yes, we sure do. In fact, one of the songs that we didn’t write, and there’s only two on the record that we didn’t write, but one of them is called ‘Sorry, I Was Right’ and it’s a song that some friends of ours wrote at the Bluebird café in Nashville. And we were in the Bluebird café with other writers and we heard this song and we fell in love. The song is a narrative from a first person perspective of a girl singing of a guy having an affair. I just want to clarify I haven’t had an affair for the record.

So when we play that song and we finish it in such a moving ending and everyone is always like ‘oh, wow’ and

everyone in the audience just turns and stares at me and starts giving me death stares.

Do you think that you would have had the same success in country music if you hadn’t moved to Nashville and stayed in Australia instead?

Well I can’t comment on what would have happened if we had stayed in Australia as far as how our success goes. But certainly it has made us better – better musicians, better songwriters and better artists. So from that perspective, it was certainly the right move.

Has moving there inspired your music in anyway?

Yes, totally. The ability to work with the Steve Wariner’s of the world and the songwriters that we did on this record who have had multiple number ones. That’s pretty amazing and we don’t take that for granted and that comes with being heavily involved with the Nashville community.

So you are about to head out on tour – what is the one thing you are looking forward to most on tour?

Catching up with people is probably the number one thing. Also playing the new songs and letting audiences hear these new songs live is a really exciting thing for us too.

So before we let you leave, we ask a couple of fun questions in all our interviews. So the first one was – if you weren’t making music what would you be doing?

Lying on a beach in the Bahamas. Relaxing full time.

Where do you see your music headed in 5 years?

I’d like to keep pushing ourselves creatively, and I think we have really done that on this record. I think if you looked at our first one, which we love, and is nice to listen to every so often just to put it on and to hear those songs again but I would think that there has been a real development and a real growth from the first one and its gone in a slightly different direction. So I’d like to keep pushing ourselves in that direction and to keep writing better songs and get better on our chosen instruments and keep being really honest with our lyrics.

O’Shea’s ‘The Famine and the Feast’ is out now!