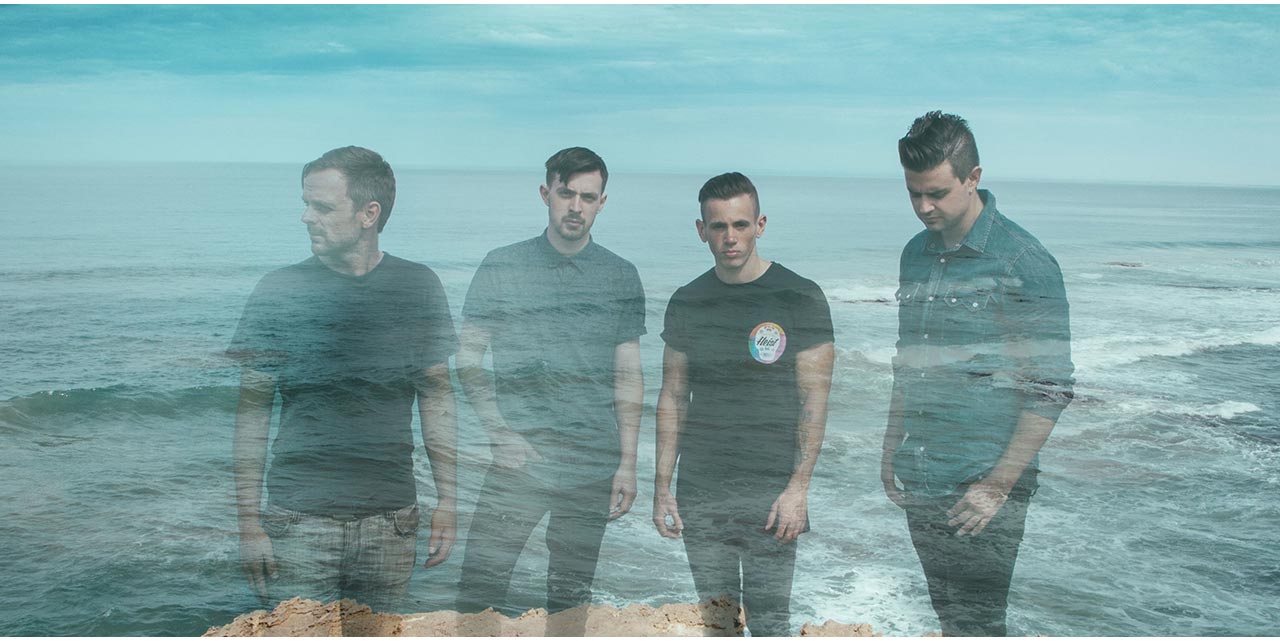 After enjoying 10 years touring nationally alongside the likes of Jimmy Eat World and Midnight Oil, and with two albums, three EPs and two DVDs in their pocket, followed by a long break,  Melbourne rockers Antiskeptic, are hitting the road this month to promote their latest album ‘Stare Down The Ocean.’

Thanks to Death Proof, we had the chance to get in touch with the band’s drummer Nick Coppin, to find out more about the tour, their zombie music video and much more.

SR. You guys have toured with great bands like Midnight Oil and Jimmy Eat World, just to name a couple. What’s your favourite touring memory so far?

I was thinking about this today and I gotta say, that getting to play with Jimmy Eat World was pretty special. I remember getting the call to say we got the slot and jumping around the room I was that happy. It was on the back of their ‘Clarity’ record, which was an album that I’d been a huge fan of. They were still quite unknown back then and there wasn’t many people at the show, but they came back a year later on the back of ‘Bleed American’ and it was massive. They were nice enough to ask us back as support band, which was really amazing of them…both tours were incredible.

SR.  After six years on the bench, how hard was to put all the pieces together and making a comeback with the band?

The big hurdle was having no money! We knew we had a great record in us, but it was figuring out how we could actually come up with the funds to record and release it, which was causing us some major roadblocks. What became a key component in the whole process was crowd-funding. We are fortunate enough to have built a fiercely loyal fanbase over the 15 years that we’ve been a band, so when we put the word out about our plans, we were overwhelmed with the response and belief in our vision and the readiness for our fans to back us with their hard-earned. Through the whole course of getting the record ready we’ve been able to raise over $23,000 which has just been massive for helping us kick-start things again.

We really have some amazing fans, so it is a real credit to them that we’re here now about to release something we’re incredibly proud of.

SR.  We are loving your “Walking Dead” style video for “When The Night Comes In”. Can you tell us about the process of filming it? Who came with that idea?

I’m always thinking of ideas, wether it’s artwork, tour production, merchandise or videos. I love that side of being in the band. I’m not really a songwriter, so its all these other aspects that make up being in the band, where I get the chance to be creative. The whole motto behind the last 2 videos was creating something that would be a real blast and fun to watch. I’d been listening to the track on repeat trying to think of ideas and the story just came to me as I was driving along one day.

We’ve been working with a great Video Production company called Robot Academy, which is run by a friend of ours Ryan Chamley. Ryan is amazing for taking an idea to and then taking it next level. A lot of people would’ve laughed at my concept and told us we’d never get the ideas done on the budgets we had, but Ryan would just get psyched and run with it. It was amazing how everything would just fall together with the enthusiasm everyone brought to the whole project. With ‘When The Night Comes In’, we went for a real Tarantino style, B-Grade, zombie Grindhouse thriller. I actually had quite a hard time convincing my bandmates about the storyline as it sounds cheesy, but it worked out really well….it looks totally bad-ass!

SR.  You guys also created a back-to the future inspired video for Hey Dissident. Will we see more videos like this one in the future or it’s impossible due to budget?

I’d love to!! The last two videos have been such fun to make. But we’ll see….it does take quite an investment financially, so it’s really going to depend on how the album and tour does. I am thinking of more ideas though!

SR.  You are releasing Stare Down The Ocean in a few days. What can you tell us about the process of putting this album together?

It was really great to just set the task of writing a great record without any constrictions of deadlines etc. We spent two years just working on creating something that we feel is really special. Andrew did an amazing job of taking on the bulk of engineering duties. He has his own studio which was a massive help financially, as we didn’t have to worry about time constraints…He could just go in whenever he pleased and add a guitar or vocal part…He worked his butt off and it was a mammoth task to set, but he did a stellar job…I’m really proud of what he was able to achieve! We were then really honoured to have Forrester Savell on board as co-producer and also drum tracking and mixing. He has a great ear and really helped push our sound to a new level. It’s the album we always wanted to make…it’s a massive sounding, anthemic rock record and this is largely due to the effort both Forrester and Andrew put into the recording side of things.

SR.  The album is an independent release. You guys didn’t want to work with a label or simply it did not happen? How hard was to going solo for this release? Was easier to work without label pressure? We’ve always pretty much been independent…so we’ve never really known any different! We just get out there and get things done. We would’ve loved to have had the financial backing of a label…it would’ve been so much easier getting things off the ground! But this project has been totally DIY and a process where we’ve been able to get our fans involved and invested in the vision. You really hear the under-dog, fighting spirit in the new album…We’ve been able to do things the way we want to do them, we’re not in debt to anyone, we have an album we’re really excited about and a new energy amongst the band, that makes us feel that we’re capable of anything.

SR.  You guys are hitting the road to promote the album. What can fans can expect of this tour?

We’re super excited to finally get the album out and to hit the road. It’s been way too long between drinks! We’ve got a rad set that I reckon old and new fans are going to love. We’re going to be busting out a great selection of our earlier stuff and songs we haven’t played in years to a few of the newbies. We’re hoping for one big sing-a-long!

SR.  Can you share with us any funny or weird story that happened to you while on tour?

We did this big festival for Triple M, that had all these huge bands as well as some big comedy acts. One of the comedy acts was ‘Puppetry of the Penis’. One of the guys from the Puppetry team was a real knockabout bloke who liked a drink or two, so naturally it was pretty easy to become good mates with him over the tour.

I can remember we were hanging out, when this bunch of girls saw him and came rushing over asking if he’d do some ‘tricks’ for them. Quite chuffed with the recognition and a few drinks put away already, he was more than happy to oblige. He whipped out a little camcorder, asked me to film and proceeded to put on a private show for the girls in the carpark! Let’s just say I was scarred for life, but it had to be one of the more weird and funny situations I’ve been in on tour!