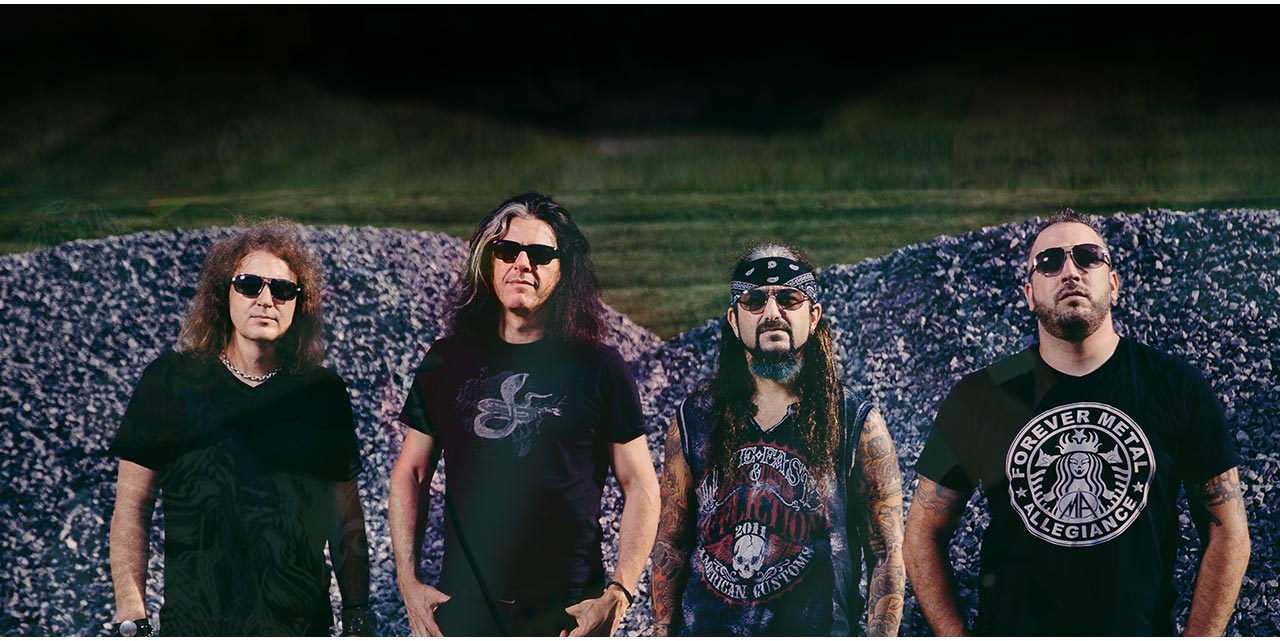 Metal Allegiance first formed back in 2011, when a group of friends decided to get together to pay tribute to some of their favourite metal acts. Over the years, their live shows have become legendary, and the line-up has gone through several changes. This year, the band has finally released their debut album of original tracks, and this release reflects their vision, passion, and dynamism. 2016 will see a solid line-up coming down under: Mark Menghi, Alex Skolnick (Testament), David Ellefson (Megadeth), and Mike Portnoy (Winery Dogs, Dream Theatre, A7X, etc).

Thanks to our good friend, John Howarth of Nuclear Blast, we got to have a chat with drummer, Mike Portnoy, about their history, his drumming heroes, and playing Soundwave 2016.

SR: Metal Allegiance is the band name on everyone’s lips at the moment. How did the project come together to begin with?

MP: Well, it started as a live thing ten years ago, and a bunch of friends getting together to pay tribute to our heroes, play covers, and have some fun. It started with four of us, then it expanded to seven of us, and then it expanded to like ten or twelve. Next thing you know, last year we were doing gigs with up to fifteen people on stage. At that point, we decided, ‘Hey, why don’t we make a record or original material and take it to the next level?’ So, here we are.

SR: And how do you feel about these monikers like ‘supergroup’ and ‘megaband’? MP: How do I feel about them? Well, I can’t really generalise them into one answer because some are good and some suck. The ones that I’m involved with, I generally try to put a real emphasis on working together. I mean there’s a lot of people who are in these ‘supergroups’ and they don’t even write or record in the same room. Anything that I’ve been involved with, from Metal Allegiance to The Winery Dogs, to Flying Colors have all been about collaborating and working together to see what happens. So, in my experience, any ones I’ve been involved with have been very positive experiences.

SR: What, or who, made you first pick up the drumsticks and what’s the most satisfying thing about drumming?

MP: I think the first drummer that was my first drum hero was Keith Moon, just because he was so charismatic and animated onstage. I couldn’t take my eyes off him. And then, years and years later, when I was more interested in drumming, there was Neil Peart from Rush. He was a huge, huge influence when I was an early teenager. And as to what’s most satisfying, I don’t know. I never really thought about it – I just did it, you know? I don’t really like to think about things too much. It’s not genuine or sincere. It’s premeditated… I don’t know. For me, I just naturally gravitated to drums and I just do what I do onstage, you know? I’m not one of those people that are very anal or concerned about playing everything so perfect and having great technique. I really don’t give a shit about any of that sort of stuff. I just want to go up there and entertain and connect with an audience.

SR: People often talk about drumming in terms of it being a great energy release and an escape. When you play, are you present and focused, or is it more of an automatic experience?

MP: When I’m playing, I’m completely in the moment and I’m really connecting to an audience. There are a lot of other musicians I know that are in their own world and are more concentrated on playing and everything…being accurate. I’m more about looking in the audience, connecting with them, reacting from a situation. You know, I don’t premeditate any of my fills or anything. Every time I get onstage, I want to be in the moment.

SR: Whether your own or other people’s, what are your all-time favourite intros, beats or riffs?

MP: Ah, I think John Bonham has created some of the most classic ones with The Rover and When the Levee Breaks and Rock and Roll. You know, he was the king of the classic drum intros.

SR: You were talking about Keith Moon’s charisma before. Which other drummers that you’ve seen live have most excited you?

MP: Well, my first heroes were Keith Moon and John Bonham and Ringo Starr and Peter Criss. That’s when I was a kid in the sixties and seventies. And then I discovered more progressive music and Neil Peart became one of my heroes. And then came the whole thrash and metal movement and I went through a whole phase of that.

SR: One of the best things I’ve ever seen on YouTube is you playing Name that Tune on a Hello Kitty kit. How did that come about?

MP: That was just a silly, spontaneous thing I did. We were doing press and they had that kit there and little did I realise it was going to go viral and have two million hits in one week. If I’d realised that, I would’ve put a little more thought into it. It was just spontaneous silliness.

SR: What’s your favourite track from the Metal Allegiance album and why?

MP: I think I like Can’t Kill the Devil. That’s one of my favourites just because I get to do some drumming that that’s unlike anything else I’ve been able to do in my career. My career’s been mainly made up of more progressive music, so a track like that, when I’m able to pull out all the stops with all of my Slayer and Pantera influences and just really go all out…That’s probably one of my favourites.

SR: Has your kit set up or playing changed a lot, over the years?

SR: You have a number of impressive guests on this debut album. Who did you have the most fun playing with?

MP: Oh, I think the track Dying Song, with Phil Anselmo, came out really good. I’m psyched to have finally done something with Phil. He’s been a part of Metal Allegiance from the beginning. He did a lot with the live shows. We would always play Pantera songs live but it was really nice to have an original with him on board, and he sounds amazing on that track.

SR: What’s your favourite cover to drum to?

MP: I mean, I’ve recorded over 200 covers at this point in my career so I don’t know. I’ve done everything from full albums – full Iron Maiden, Metallica, Pink Floyd, and Deep Purple albums for Dream Theatre. Me and Paul Gilbert have four tribute bands playing The Beatles, The Who, Zeppelin, and Rush. So I can’t possibly pick one. I’ve been so immersed in covers my whole career. I enjoy them all.

MP: Well, now that the album is out we want to just play as much as we can. It’s hard for us to do traditional touring because every one of us in another full-time band. So we’ve just got to take advantage of opportunities like Soundwave to come together to do something special. And each and every time we play, the line-up is different, so you never know what you’re going to get. It’s a unique experience, each and every time.

SR: Do you have any strange fan requests or tour stories you can share with us?

MP: I don’t know. Nothing I could tell you.

SR: Anything interesting you’ve been asked to sign, maybe?

MP: I’ve signed everything from people’s cars to people’s prosthetic legs to people’s tits. You know, I’ve been doing this for thirty years now, so I don’t think there’s anything I haven’t been asked to do, at this point.

SR: Have you heard much about Soundwave, and are you excited about coming down?

MP: Yeah! I’ve been watching from afar for years and years, and waiting to be invited, you know? Like I said earlier, I’m in six different bands right now, so the odds were starting to work in my favour that I’d eventually get to be invited, with one of my bands. So, it’s finally happening with Metal Allegiance. And I can’t wait to come back down.

SR: Do you have a shout out we can send your Aussie fans, ahead of Soundwave?

MP: I think I pretty much just said it. I’ve been patiently waiting to play Soundwave and be invited and I’m excited to finally come back. It’s been too long since I’ve been in Australia, so I’m really looking forward to coming back and seeing everybody again.

Tickets are now available via www.soundwavefestival.com