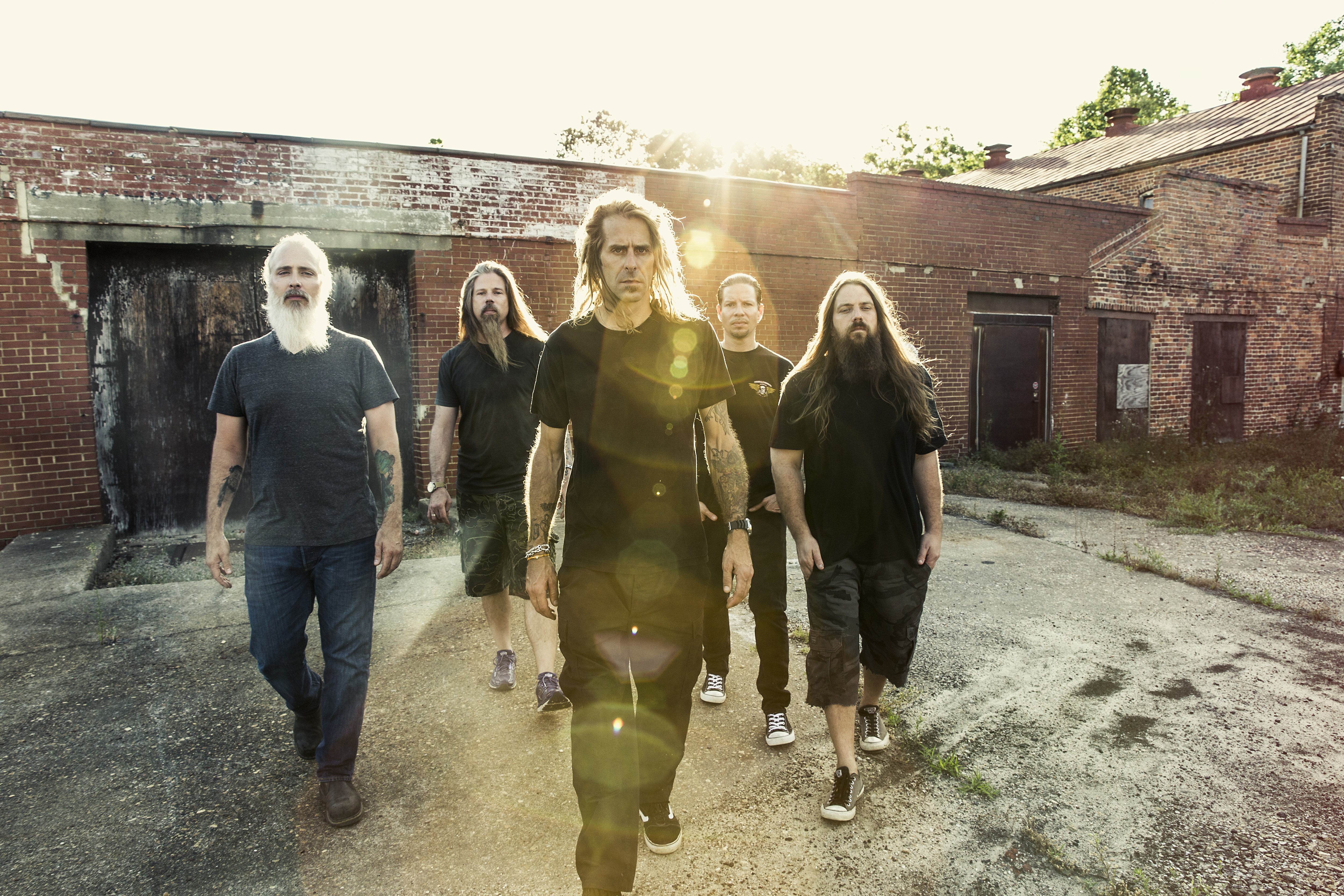 This October, the mighty Lamb of God will be hitting our shores to play headlining shows in Adelaide and Fremantle and a set of dates across the country supporting Slipknot. Their latest album, VII: Sturm and Drang, hit #2 on the ARIA charts, making it the band’s highest ever Australian chart debut. Initially forming in 1994, the guys have gone on to become one of the most highly respected metal outfits of all time. Seven outstanding, critically acclaimed albums later, the guys have notched up Grammy, Spike, and Revolver nominations, as well as 5 Metal Hammer Golden Gods Awards. These hard-rocking Virginians are a force to be reckoned with and this is a tour not to be missed. Thanks to our good friend, John Howarth of Nuclear Blast, we recently had a chat with bassist, John Campbell. Enjoy.

SR: We can’t wait to see you back down here in Australia with Slipknot in October. You did Summer’s Last Stand with Slipknot last year, but how did this tour come together?

JC: Well, there was a secret meeting just after we had a black mass. Just kidding. It just came together. We hadn’t played Australia for some time. Apparently a bunch of bands also hadn’t played there in some time, and Slipknot was one of them. They said, ‘Hey, we want to do a tour. Why don’t we go out together?’ And we said, ‘Hey, that’s a great idea.’

SR: You were forced to cancel your European tour last year as a result of the terror activity. Can you tell us how you were feeling at the time and what you were told in Tilburg that led to the ultimate decision? JC: I was personally wanting to stay and play the tour, but as a group I guess you could say that it seemed credible to take the threats seriously. What exactly went down is something I’d rather not discuss. There were credible threats. I happened to think, ‘Well, hey, fuck the credible threats. Let’s just rock ‘n’ roll.’ But that’s not how it works as a group.

SR: Although the threats were obviously very real, you attracted criticism at the time. Were you annoyed by people who didn’t get it?

JC: Well, seeing as how I was on the losing side of the argument, yeah I was mildly annoyed. But one of the great things that I get to experience in this life and being part of it is that I get to sit back and watch, knowing exactly what’s going on and how people are reacting. To me, that is hilarious, because people are making judgements without knowing what they’re talking about. But yet, they’re very sure about their decisions. To me, it was comedic. I still think of the backlash any time a story comes up about us connected to the terrorism. You know, we never did this for anyone but ourselves. We consider ourselves incredibly lucky to have accomplished what we have so far. People having negative opinions about us has never done anything but spur us on, anyway. They can think and say what they like.

SR: I spoke to you almost exactly a year ago, just after the release of VII: Sturm and Drang, which has gone on to receive widespread critical acclaim. Would you consider this album to be your best to date and do you pay any attention to reviews and critics?

JC: Ah, yes, I do pay attention to reviews and critics. Only, again, because from my position as a person who’d been helping put this album together from its very beginnings, through to the studio and the mixes that once it’s released, I’m interested in seeing what the reaction is. I do think that our latest is our greatest release. I think that we somehow keep topping ourselves and have fortunately put out seven great records that I’m very proud of.

SR: You’ve spoken of your love of touring in the past, John. When you reflect on the band’s history, which have been some of the most memorable shows you’ve played and why?

JC: I would say the massive festivals that we get to play are the most memorable, because we’re really there for the show – for the music. To be able to perform for tens of thousands of people is an amazing rush.

SR: When you’re playing to audiences of those sizes, what’s generally going through your mind? Are you thinking about the audience, or concentrating on the technical aspects of the performance, for instance?

JC: Right before we go out in front of the crowd, I’m generally getting into the zone, as it were. I’ll be standing backstage, listening to music – something to get pumped up – and get ready to go and stand in front of a bunch of people and act like a jackass playing these songs that I’ve gotten really good at playing. That’s just the beginning of it. Sometimes your mind totally wanders and you’ll be thinking about something totally unrelated and really domestic while you’re onstage, rocking in front of a bunch of people. That’s always kind of funny.

SR: So, what’s the best thing about being a rock star?

JC: I think it’s a life of privileged existence when we’re on the road. Our daily schedules are made for us. There are people who do all our heavy lifting. We just have to show up and use this specialised skill that we’ve developed to adoring fans. It’s a pretty amazing job, all around.

SR: Where would you like to play that you haven’t had a chance to as yet?

JC: Well, we’ve hit all the mostly inhabited continents. We haven’t played in Alaska or Hawaii. I’d like to play those. We haven’t played in Iceland. I’d like to do some more extensive touring in Australia and see cities other than the five that we always see…some of the smaller towns, maybe, that still have venues and a live music scene. I would absolutely love to get back to India – that place is insane.

SR: What is it about India that fascinates you?

JC: Just that it’s a completely foreign culture to me. The food is amazing – the colours, the smells, just the newness of everything (laughs), which is probably a funny thing to say about a place where civilisation has been for quite some time. But newness in terms of my experience. I’ve had the chance to walk around in Bangalore a little bit, and there are cows walking around like it’s no big deal. It’s pretty great. And there are people just going on about their lives in a way that we in the western world would not consider to be the normal, daily kind of stuff.

SR: We talked about politics during our last interview, which I know is something you take great interest in. Can you share your thoughts about Trump, Clinton, and the general current political climate in the U.S?

JC: (Laughs) Oh, it sucks. It’s terrible, but I think it’s probably a glaring sign that the empire is crumbling. We’ll see what happens from here. I think the people who are going to be are choices for president are a failed reality TV businessmen who just spits out whatever comes off the top of his head and is incredibly childish and not a very likeable person; and the other person just seems incredibly corrupt and the same kind of politician we’ve had in office forever that’s been totally destroying our way of life – well, manipulating and basically being a corrupt, power-hungry sociopath.

SR: In that case, which is the lesser of the two evils, in your opinion?

JC: Yeah, the problem is which one is more evil? I’ve no idea what I’m going to do when it comes time to vote. There’s a guy here in town who was actually living in the dorms back when Lamb of God first met. His name’s Silver and he’s somewhat involved in the local politics here in Richmond – he’s down at city council, filming and watching what’s going on down there. He’s a pretty vocal anarchist. Whenever I don’t know anything about the race that I’m voting in, I tend to write him in. So, I’ve voted for him for mayor of our city a few times, and I think I may be voting for him again.

SR: You seem to be a very serious, level-headed sort of a guy…

SR: Well, that’s how you come across.

JC: (Laughs) Only when I’m in interview mode. You know, if we were sitting down over a beer and a couple of joints, it’d be a whole different story.

SR: What makes you happy?

JC: (Laughs) Well, I’m a father, so seeing my children healthy and smiling makes me happy. Oh, lack of strife…people getting along and being friendly…not being dicks. That’s what makes me happy… Playing music… riding motorcycles. Those things make me happy.

SR: What bike do you ride?

JC: I’ve got a few. Well, I’ve got two that are running: a Hardtail Sportster from 2001 and then I’ve got an ‘82 FXS that’s been pretty heavily customised – a low-rider with a shovelhead.

SR: Do you customise them yourself?

JC: Yeah. Well (laughs), I try and then I mess it up and I’ve got a friend who builds bikes who fixes everything for me. I can do little stuff, but I don’t have any fabrication skills. But I’ve had to switch out the key switch on my shovelhead – it rattled through two of them, so I just had to switch it out to just a kill switch. I did that myself, but I didn’t fabricate anything – I just switched it and popped it into place.

SR: When do you expect to start working on new material with Lamb of God?

JC: I would imagine sometime next year. I think when we’re towards the end of this tour cycle.

SR: Do you have a message we can send out to your Aussie fans ahead of the tour?

**Tickets are on sale now HERE**

~~Also touring with Slipknot on the following dates:~~