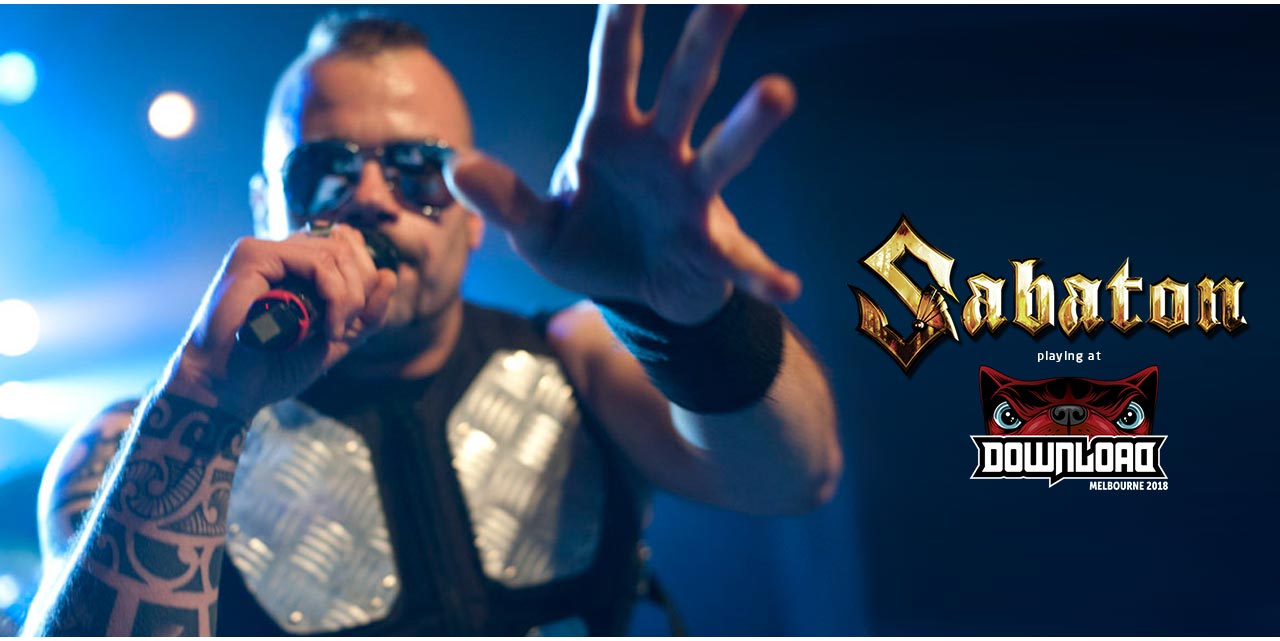 The mighty Sabaton is ready to rock Australia next year as part of the inaugural Download Festival set to be held in Melbourne.

Thanks to our good mate John Howarth of Nuclear Blast, we had the chance to chat once again with Sabaton’s frontman Joakim Brodén in order to find out more about the band’s excitement to play at the inaugural Download Festival Australia, war themed lyrics and much more!

SR. Sabaton is playing the first Download in Australia! How do you guys feel about being part of it?

JB. We are super excited. For us festivals is a good platform to show our music, especially because some people might not know us that much as we come from far away.

Obviously, been this the first Download is a huge thing, but also a scary one as you don’t really know much about the people organising it, hopefully nothing dodgy happens and the festival becomes huge and across the entire country.

I really hope they get it right!

JB. Yes, we love those guys, we are good friends. The Amon Amarth guys are such a powerful band, I cannot wait to see them live and hangout backstage.

SR. Why you guys didn’t go all in a play a headline show instead?

JB. I’ve to be honest, and I’m not sure if we are big enough in Australia to do that. I might be mistaken, but if all goes well at Download we will most definitely consider a full tour down there at some stage.

SR. We had the chance to see you guys a couple of years ago here opening for Nightwish, and we must say a fair bit of the crowd at the Enmore was there for you.

JB. Oh really? That’s great to know. I do remember people singing Gallipoli with us, it was mind blowing and the vibe was great.

Also the guys of Nightwitsh were really cool to tour with. They are s bunch of really talented musicians.

“…Hopefully this will be the first of many Downloads in Australia…”

SR. The Sabaton shows are full of energy and your voice remains intact the whole time. How do you prepare for each show?

JB. Contrary to what everybody might think I never drink before shows. I rest and give my 100% every time.

I find it unfair for fans to drink before shows you know, because if you do it you have less energy or you are hangover. You play for fans, so you need to deliver. SR. Sabaton is well-known for their Lyrics, based on iconic wars and battles that marked our universal history. What comes for you first, the music or the lyrics?

JB. Music comes first, but the historical research is what never stops. For me is all about having good deep lyrics that are accurate with what happened in the world through the years.

For example for “Sparta” I’d an intro done so the lyrics about Leonidas and his 300 warriors came later. It’s like having music waiting to be filled with the right story.

SR. Any topics or historic events you would like to sing and write a song about, but you haven’t had the chance yet?

JB. Good question, I’ve many. For example I’d love to have a Napoleon song, I’ve been thinking about it, but it’s hard to put so many events surrounding a character so iconic across history in just few minutes of music.

Another idea I’ve been working on for years is a song about Pearl Harbour. Actually, the song is partially written already.

It’s funny if you think in how hard this type of song need to go through to be out there. For example “Gallipoli” took me almost 2-3 years to complete. I started working in that song late 2005 and it was our by 2008.

SR. What is your take on the current metal scene world-wide

JB. Metal is back! And has never been dead! It will never die while we have ambassadors spreading the music world-wide like AC/DC, Ozzy, Maiden, Judas Priest.

Sadly, we have also lost some huge musicians recently, Chris Cornell, Bowie, Prince, just to name some. But I’ve no doubt music and rock will keep going.

SR. Well, I believe Keith Richards still gives us hope that life after dead might be possible…

JB. (Laughs) yeah…Keith is the man. I would love to know his secret, he truly represents what a rock star is. SR. What’s the craziest crowd you have ever seen?

JB. South American crowds are a different kind of thing. People go nuts, huge mosh-pits, and the energy is intense. For us is hard to decide if the craziest are the Chilean or Argentinean crowds among others down there.

SR. What would you say to some purist that claim some Sabaton lyrics promote the Nazism?

JB. Obviously, we cannot control how people will feel about our music and what message they might get from it, but I invite them to put close attention to our lyrics, as our goal is to sing and speak about the consequences of war and politics.

More than protesting or push an ideology forward, what we want is to always pay tribute to all the millions who lost their lives in the battlefields around the world, no matter where.

SR. Can you share with us any memorable tour story?

JB. Nothing beats flying with Scorpions on their plane during their Birthday. It was in Russia, and they invited us to travel with them. Just put the things in perspective there: Russia, Vodka, Private Plane and Scorpions…do I need to say more? (laughs).

SR. Have you ever received any weird request from a fan?

JB. Way too may (laughs). I remember this time during a show I decided to say to all the fans that I’ll be willing to sign anything for them, which was a bad idea, because after the show this guy came in and asked me if I’d sign his dick. I was like no way!, and he quoted me saying that I said I’d sign anything, so I told him something like “yeah I did say that, but I just cannot sign anything that small as I need to at least being able to fit my initials on it” (laughs). Just to be clear, I never signed and will never will sign nobody’s dick.

SR. Just to finish, any message for the Sabaton Aussie fans ahead of Download Festival?

JB. We are beyond hyped to be there as part of the first ever Download in Australia, and being able to play some sideshows with our friends of Amon Amarth. Is gonna be loud and we’ll give our 200% as usual. Hopefully this will be the first of many Downloads in Australia.

We thank our fans for their constant support, and hope to see you there jumping on the pit, we will try our best to come back more often!