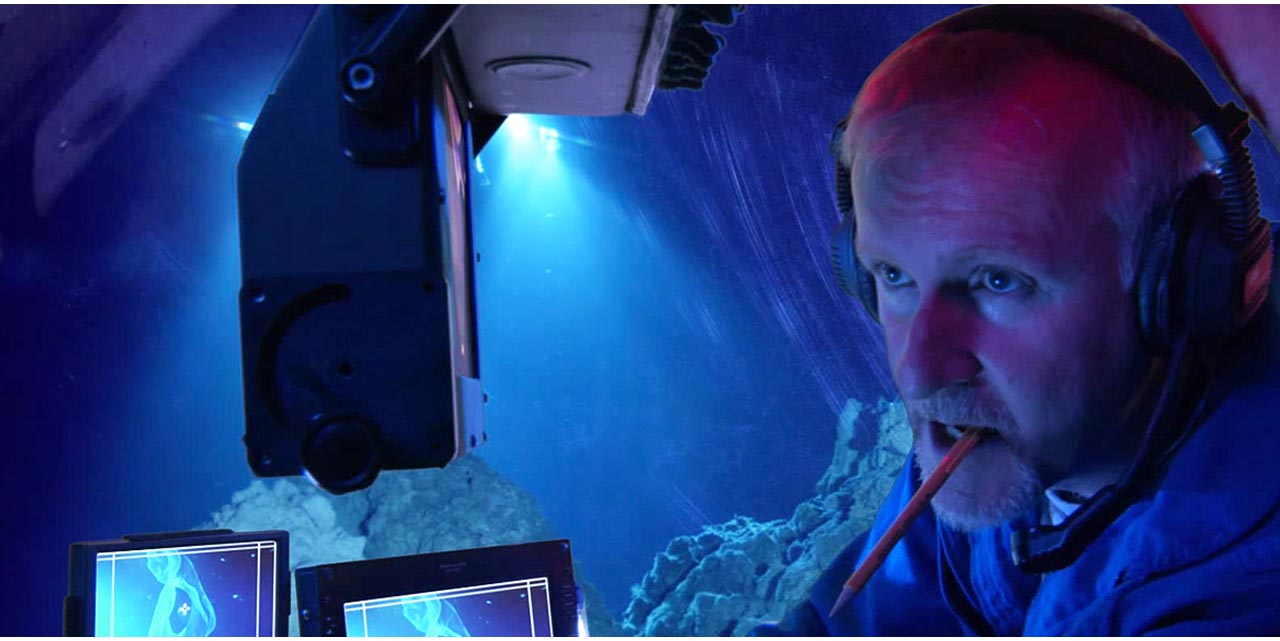 James Cameron, The King Of The World himself, came down to Sydney to present his documentary Deepsea Challenge 3D, and Spotlight Report was among the lucky few media outlets who got to sit down with the legendary ground-breaking filmmaker to find out all about his newest production.  Joining the Oscar winning director in this intimate roundtable interview was Ray Quint, the Australian director of the film.

Deepsea Challenge 3D is a fascinating journey to the deepest place on Earth. The Three-dimensional Documentary marks a personal journey for the visionary film director, one where this fearless explorer has taken his passion for the seas to brand new depths by descending into Mariana Trench, the deepest place on the planet. The adventurous director managed to do so by using the submersible Deepsea Challenger that was built in Sydney.

SR. We are fascinated about this situation where we have a director like you, Ray, directing another director, in this case Jim (Cameron). We wonder if there was any moment during the editing process when you had to go against Jim’s wishes, by cutting footage from the final version that Jim really wanted to showcase. Can you guys describe those scenes left behind? There were a lot more processes that were developed for the building of the sub, but we took the decision to cut to the chase and get the sub built relatively quickly.

JC. I think it was really the opposite, as there were things that Ray really wanted to show that I was a bit uncomfortable with that eventually ended up staying in, like seeing my kids on screen. And from a security point of view, one doesn’t want to do that, but he lobbied for the fact that it spoke so well to the theme of inspiring people; and part of the thing I was doing was to try to be, in a sense, a role model for my own kids, because so many people questioned me, saying, “You are a father, you have five kids, wife and family…why would you take these risks.”

“I’m doing this, because I thought about it and it has a meaning for me – in a sense it defines me, it defines my value systems as a person.” – James Cameron –

I think there is a greater risk in not standing for something in life, and I want my kids to know that they should feel empowered to stand for something and go for their dreams. There was a balance between those two factors, because people have a hard time raving around with risk, when they see risk in films. There’re lots of people who live with risk and danger every single day, like health care providers, doctors going to remote villages, combat jet pilots going to a hot zone, or firefighters running upstairs in a collapsing building. I mean, people deal with risk all the time and they have a risk equation which they run by themselves in advance, and the same is with the outcome of that. I’m doing this, because I thought about it and it has a meaning for me – in a sense it defines me, it defines my value systems as a person. We had to wrestle with all those things, much more than other expedition films, because we lost two team members…but, they were explorers and they had put themselves in hard ways repeatedly over their lives, because they believed the outcome was worth it. So, when we started to question ourselves during the whole brief, the project and so on, that’s what we eventually concluded, which is that their legacy was best honoured by continuing and completing the film which honours Andrew Wight’s original vision, and also honours Mike deGruy’s vision, because both believe in going on no matter what. I mean, Mike deGruy, I’d ever told Mike, “Hey Mike jump on the sub and take it to the bottom of the sea.’ He would have done it in a heartbeat.

SR. What would you say is the most fascinating finding during the whole expedition?

JC. Well, that is not featured in the film, because at that stage we were not ready to publish the results yet, but we discovered a bacterial mat in the Sirena Deep area, twice as deep as any other known bacteria, and we think it might be an example of how life originally emerged on Earth.

JC. Yeah, we also found some amphipods, which look like small shrimps, and they release a chemical that might be useful to cure some illnesses. There will be a paper from a team of scientists, hopefully soon, with all that information.