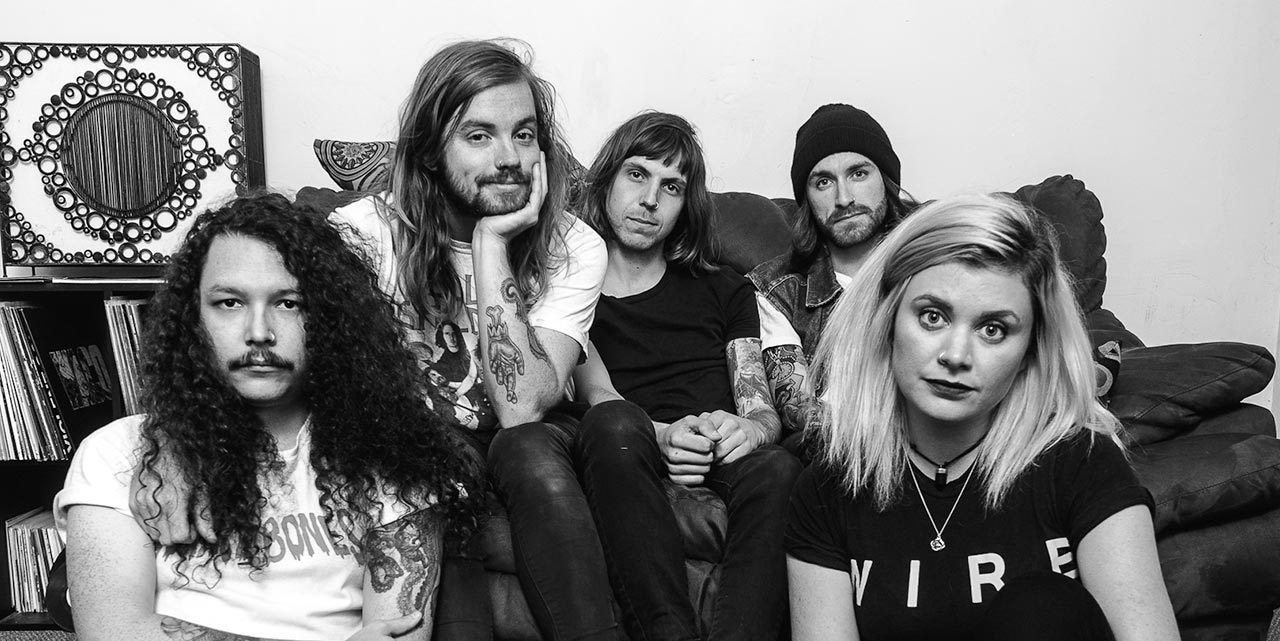 We caught up with Jake Laderman the drummer of Melbourne punk rock band CLOWNS. We talked about the upcoming Dead of Winter festival, as well as what else the band has been up to, and the scary clowns who threaten the lives of good honest citizens and make an internet meme out of it (totally unrelated to anything to do with the band).

SR. We’re chatting about your band CLOWNS , you guys have had heaps going on in the last eighteen months, let’s start off with your most recent album Lucid Again, how’s everything going since the release?

It’s great, we’ve done many shows in many countries. It’s been a really fun ride, I have nothing but positive things to say!

SR. You guys are playing at Dead of Winter festival next weekend, are you gonna be dressing up as scary clowns to fit the horror theme?

I don’t see that happening. We have an unspoken rule about dressing up as clowns. We just try to scare to shit out of people with a really disgusting performance.

“…he (Dave Grohl) came and gave me a hug and thanked us for playing, and complimented my drums…”

SR. Let’s chat about the writing process for ‘Lucid Again’, what did you do differently compared to previous records?

This record is the most experimental one we’ve done. We threw a lot of curveballs, stuff that we’ve never done before, it’s the first super high production record we’ve done. It was a great experience.

SR. You guys supported Foo Fighters at Etihad stadium, how was that?

That was amazing! I used to go watch the footy there as a kid, I never thought I’d ever play there.

SR. Did Dave Grohl have any words of advice?

I was standing side of stage watching Foo Fighters, he came and gave me a hug and thanked us for playing, and complimented my drums. It was a really nice thing for him to take the time to do, it was very surreal.

SR. What artists would you say have influenced the sound of the new album?

SR. What band do you want to check out the most at Dead of Winter?

SR. So, what was the inspiration behind the music video for PICKELS?

It’s about substance abuse, harming your body, and taking it too far. That idea of getting the shit kicked out of you is what happens internally when you get wasted. That was our way or representing doing damage to yourself.

SR. Are there any consistent themes or messages you convey through your music, is that one of them?

Not necessarily, we have songs about all kinds of things.

SR. Where has been your favourite place to tour thus far?

We toured in China, which was really amazing. There are beautiful landscapes, and it was a real culture shock. There was a massive language barrier, different foods, and different modes of transport. We were getting around by trains at the time, it’s so packed and there are so many people, it was hard to know where to go. It was a really crazy time. A bunch of us got sick and it was really full on different experience but it was really fun.

“…I’d really like to hear Weird Al Yankovic cover one of our songs, that’s be funny…”

SR. That sounds awesome man. You touched a bit on not dressing as clowns before, but a couple of years ago there was this weird phenomenon that happened where heaps of people dressed as clowns and tried to scare people. Did that effect your band in any way?

It really did. We have a lot of people that send us abusive messages on social media because they believe we are killer clowns. We’re not, we’re a band from Australia. A lot of the time it’s just young kids, which is funny, but if anything it gave us a lot of free publicity. It was a pretty strange couple of months *laughs*. I wouldn’t even say it was negative, mostly amusing. I’m glad we never came across any real killer clowns, I can imagine that would be terrifying.

SR. On the topic of collaboration, if you could work with any artist, who would it be?

That’s a good question, I’m not sure whether to answer seriously or as a joke. I’d really like to hear Weird Al Yankovic cover one of our songs, that’s be funny. I don’t know if that counts as a collaboration or not, but we always listen to really silly Weird Al songs in the car. As for a serious answer, I don’t really know, but now you’ve planted this seed in my brain and I’m starting to think about it.

It’s funny you say that, on that tour run with DZ Deathrays at our Brisbane show Shane came up and sang a song with us, we did a cover of surrender by Cheap Trick. I think there might be some footage of that online, it was really fun, everyone in the band is a pretty big fan of Cheap Trick.

SR. Is there anything you’d like to say about the Dead of Winter festival?

We’re on at around six o’clock, it’s gonna be a great time and we can’t wait to see a bunch of awesome bands, hang out with friends and see some of our fans.

Don’t miss CLOWNS at Dead of Winter festival, playing alongside a bunch of amazing bands! It’s going to be an awesome time, so get yourself some tickets before they sell out! Follow CLOWNS on social media to keep up to date with their future shows and global antics!