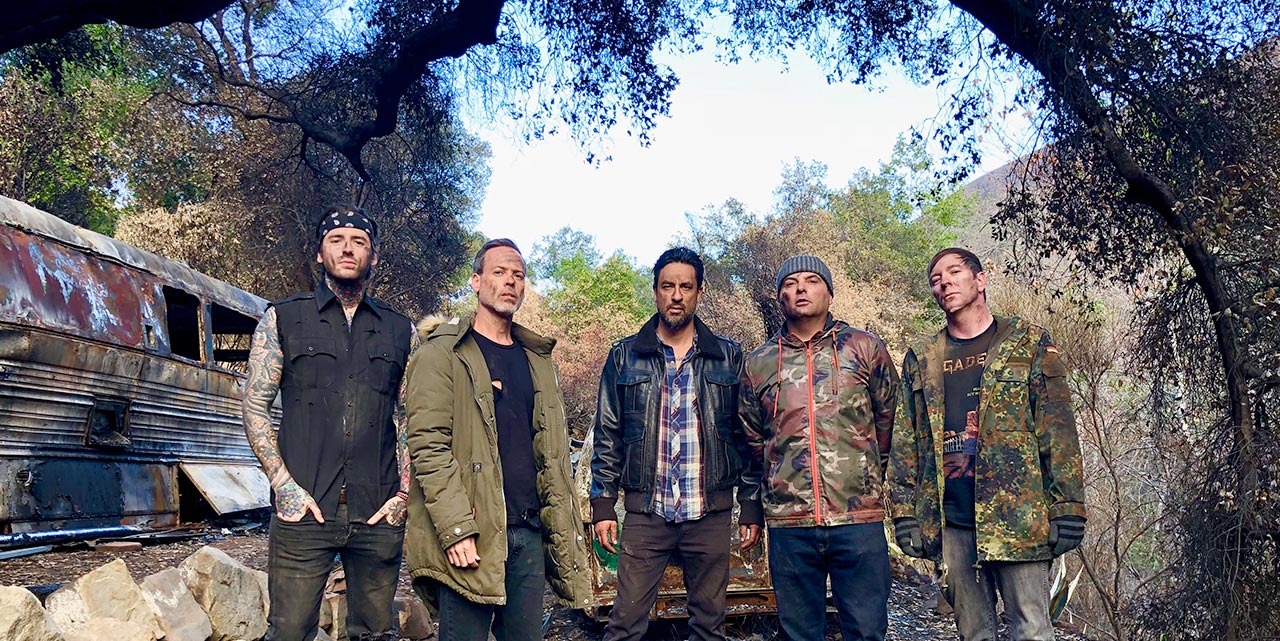 We had the chance to catch up with Jake Kiley of Strung Out to chat about their upcoming Australian tour. We spoke about their album Suburban Teenage Wasteland Blues, their favourite memories of Australia, and what’s next for Strung Out.

SR. So you’ve got this crazy Australian tour coming up where you’re playing Suburban Teenage Wasteland Blues in its entirety, with a few extra hits thrown in. Are you looking forward to that?

Definitely man! Were gonna play the whole album back to back, and throw in a few hits as well. We’re really looking forward to it! We’ve got a bit of everything including a new member touring with us this time round, so I’m looking forward to working with him on the road.

SR.You’ve played a whole album back to back on tour before right?

Yeah we have. We did a big tour across Canada and The USA where we played both the Suburban Teenage Wasteland Blues and Twisted by Design records in their entirety. It’s really cool to do, we really enjoy it. We’re just really happy that people are stoked to hear it.

“…We trialed a few different guys, but RJ had it down really well, and we get along with him really well. He’s serious about the band…”

SR.You’re playing pretty much everywhere in Australia, and you’re even playing a few regional shows, which is great to see. Are you looking forward to those regional shows?

It’s gonna be really cool. We’ve done some pretty extensive tours of Australia every time we’ve been there. We always hit the seven main cities, and a couple towns. It’s definitely worth it, if we’re gonna come all that way we should make the most of it. We have a lot of people travel a long way to see us sometimes, and we really appreciate that.

SR. You’ve got some pretty wicked tracks on Suburban Teenage Wasteland Blues that you’ll be playing when you come over in July, you’ll be playing at Fowlers live. Which you’ve played at before, have you got any fond memories of Adelaide?

We’ve played there pretty much every time we’ve been to Australia I think. It’s a great room, tonnes of people always come out, it’s always a great time. We’ve got a new drummer, RJ, so we’re really pumped to play there again. He brings a different energy to the band, so I think the fans are in for something unique and different this time.

SR. How did you get to know RJ?

Well we played with this other band, The Runaway Kids, on some shows, they came on tour with us about two years ago. We kept in touch with Rob and his other band, Implants, we played a few shows with them. When it came time to look for a new drummer, we already knew him. We trialed a few different guys, but RJ had it down really well, and we get along with him really well. He’s serious about the band, and wants to take it to the next level, which is always what you want. It was kinda just the right place and the right time, so we’re super keen to get out there and play some shows with him.

SR. Since he’s joined the band, are you working towards a new album with the new line up?

Yeah definitely. Right now we have our Black out the Sky record almost ready to release, it’ll be out by the time we get over there. It’s an eight song acoustic album, mostly original material. There’s not much drumming in it, we had a different drummer for that album. It’s kind of sparse, and more focused on the vocals. It’s something very different for us, but we really like it. It’s something we’ll be able to break out here and there, and play some acoustic stuff. I’m not sure if we’re going to incorporate it into our Australian event, but we may even do some acoustic side shows at coffee shops or something. It creates a lot of opportunities. We’re writing a bunch of new stuff with RJ as well though, some super heavy super gnarly stuff! I think our next record is going to be something else. We’ve also got a new music video that is coming out really soon.

SR. Are you going to have copies of this acoustic album for sale at your shows in Australia?

I think we will! We’ll definitely bring some over with us, I’m not sure when that be for sale in stores over there, but we’ll bring a bunch to the shows.

SR. What was getting married on stage like? That was at Soundwave in Perth right?

That was incredible! My fiancé at the time came on the whole tour with us. It was her first time seeing Australia, and we could really decide when and where we would get married, and somebody just said ‘Why don’t you guys just do it tomorrow on stage?’ which was pretty wild and fun. It was super spontaneous and in the moment, but it was amazing.

SR. Have you made any recent changes to the gear that you’re using?

I’m always looking at new stuff. I’ve been using EVH stuff for a while, it’s phenomenal, I love it. I just got one of their lunchbox amps recently, It’s amazing, it sounds great and it’s quite portable, so I can bring it on tour with me easily. I’m in the process of deciding what to bring with me to Australia. We try not to travel too heavy when we go overseas, so I’m only bringing a couple of guitars down, I have a couple Jacksons that are my favourite.

SR. Is there anything you want to say to your Australian fans?

We really love you guys for supporting us, thank you for still coming out over all these years, it means so much to us. We’re gonna make this tour really special, and we’re really looking forward to it.

Don’t miss Strung Out shooting across Australia in June and  July! They’ll be bringing their best, so get ready to party….