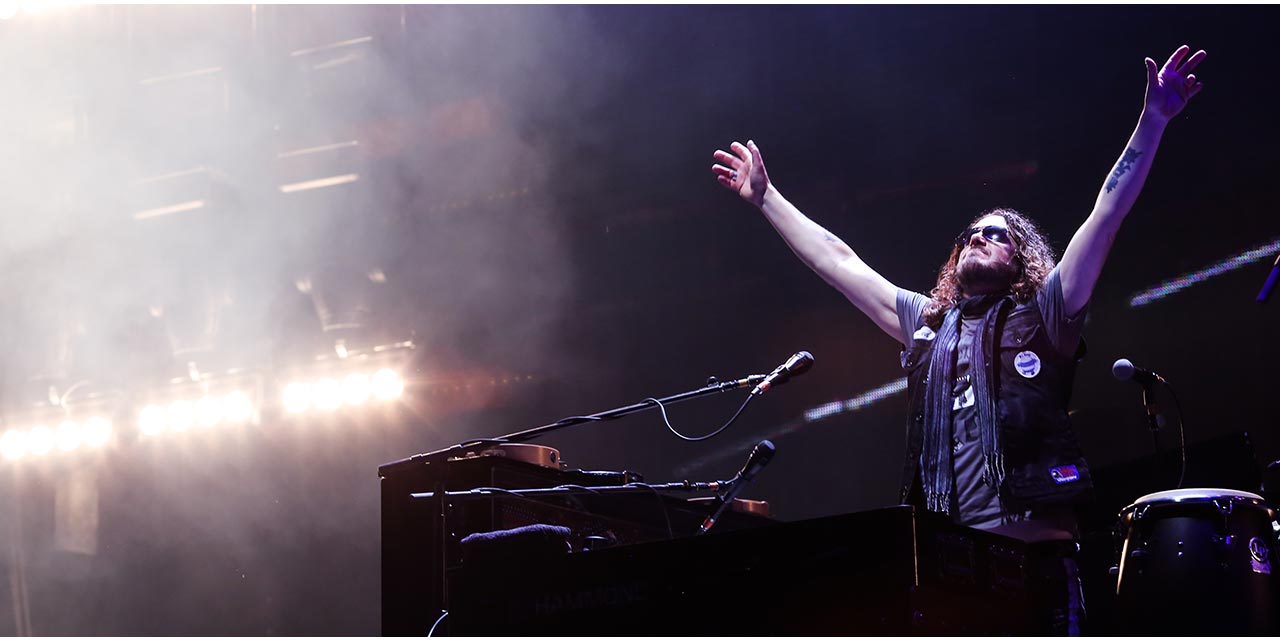 For a man that has achieved the highest honours in music, including being inducted into the Rock ‘n roll Hall of Fame in 2012, the journey was not without its difficulties; with labels unsure how to market it and Reed’s own uncertainty about offering the songs that have been in his head for over a decade, to the world.

Spotlight Report had the chance to speak to him ahead of his show.

SR. Tell us about the new album…

DR. Some years ago – about 10 or 11, I had a bunch of songs in my head that I needed to get out. And so I made some demos and started playing them for some friends of mine and they, in particular Dell James who co-produced the record with me, said ‘you know what we need to record these for real.’ I was a little bit skeptical at first and but we found some studio time and I went in, and we got all kinds of great musicians to come in and play on the record.

We wanted to do it “old-skool” style in a live sort of situation and capture the moment. And we did – I think it turned out great.

SR. You’ve mentioned that when discussing the album with record labels there was a lukewarm reception to it. What do you feel the reasons for this were?

DR. The labels that we shopped it to said that they did not know how to market it. Which my original suggestion would have been, you know Guns N’ Roses fans (laughs) – just saying! I just think that the industry is kind of in a state now; I guess it always has been, no one wants to take a chance and I don’t know – I think they were just afraid.

So with Mark and Golden Robot records, they heard it and were excited about it and that was it. It’s great.

Mark (Alexander-Erber, President & Founder) has got the right sort of vision for artists like myself, as well as all the other upcoming bands that he has signed. One thing that he said to me right away was that he wanted to put me out there with some newer bands, as opposed to what most people would do and put you out there with so-and-so from the 80’s, which just does not make any sense to me because I don’t think that way – I don’t feel that way. This record is new – it’s now and I think that he has the right vision for all the bands on his label and it’s refreshing actually.

It took a long time to put it out. I never gave up hope and Golden Robot records finally heard it and they put it out – it’s a great moment for me.

SR. The word ‘chance’ is interesting given you’re one of the longest lasting members of GNR,a  Rock ‘n’ Roll Hall of Famer – do you think that the response is indicative of the Rock n’ Roll genre?

DR. I don’t know. I think maybe a lot of it might have had to do with the fact that it was already finished and they did not have any say with what was going into the record and um, I don’t think they listened to the whole thing to be honest.

But it is what it is, and things happen for a reason and I think we made the right decision and found the right home for it.

SR. Is the title of the album reflective of the journey you took to make it?

DR. I had about 6-7 songs that were demoed up that we knew we were going to record. And I knew that I needed to write a few more. Dell said that we need that one big, sort of not ballad but mid-tempo sort of song. And I was in a spot – I had kind of gone full circle in my life and I was sitting there in this apartment, I had just split up with my wife – my first marriage was over with – and, um, I was in this shitty little apartment in North Hollywood and all my stuff was in my truck. When you’re down and out like this you let that work for you. So I grabbed my guitar and I sat down and I wrote Rock ‘n Roll Ain’t Easy in about an hour.

It was raining, of course, and I sat on the balcony of this place and that sort of set the tone for it.

SR. The album has a litany of amazing people that have worked on it – tell us a little more about their influence on the album?

DR. Mike Duda and Mike Dupke who were both in W.A.S.P at the time – Mike (honestly we’re not sure which one) had been a friend of mine for a very long time. He was one of those friends that were like ‘you have gotta record this for real’. So I had them and then Richard Fortus, who is a great friend of mine, and we have done so many things together including, obviously Guns N’ Roses, and a few others things – so those guys really set the tone too for where the record had to be. We cut the majority of stuff [together] and then brought in other people.

Asking like Frank Bonelli to play. With Rock ‘n Roll Ain’t Easy, I wanted it to sound like Zeppelin – I didn’t want it to sound like a ballad and it didn’t need all the dings and pings it just needed a big, fat f**king ass beat. And I played with Frankie up at the Cat Club at a thing called The Four Dudes and I know him because my friend Alex, who plays on the record too, we have a band called Hookers ‘n’ Blow together and they are friends so I know Frankie through him and I needed John Bonham and I said ‘you know what – we need Frankie as he’s the next best thing.’ And he just nailed it – he was perfect. So we asked him to play on one more song and he picked Forgotten Cases as he loved that song so he added his thing to it.

Everybody else [that played on the record] just sort of fell into place. Ricky Warwick (Thin Lizzy) played on a couple of songs, and they were so many others. There was a whole list of other people that we wanted to play on the album but we just couldn’t work it out logistically. And a lot of good friends of mine that are local musicians around LA. Myuko Kai – she’s from Japan- she’s an amazing guitar player, Greg Coates is a great bass player and Chuck Wright from Quiet Riot played on some songs too.

“… you have the drummer from No Doubt, the bass player from Quite Right, guitar player from GNR…

Adrian from No Doubt played on a song called Fragile Water, which I originally recorded for a movie soundtrack a few years before that for an indie film called The Still Life and I did the score for that – I added a couple of songs, and we kind of did it ass backwards where he came in and added drums later and he said ‘look’, and he got a hold of me, ‘if you ever record that song for real I want to play drums on it’, so we asked him to do it and he showed up. He had a golf game in the morning and then he came and he laid down the track and he left – he did a great job.

And the thing too, the way we did it in that environment, it was a situation where there were people who would have never played together. And Del had a lot to do with it – he orchestrated a lot of it and was kind of like a Frankenstein sewing it all together so we had Chuck playing bass, and Bumblefoot plays guitar and Richard – so you have the drummer from No Doubt, the bass player from Quite Right, guitar player from GNR…

SR. So each track kind of has a Super-Group playing on it then?

DR. I guess so – in some ways you could definitely say that.

SR. Is this album and solo project different from your other so-called ‘side projects’?

DR. GN’R is my main priority and always will be as long as they’ll have me. I’m just trying to squeeze this in but obviously I have a little more personal investment in this. It’s kind of a tricky situation because for so many years you think about…most people think about doing a solo thing and when they do you can’t help but wonder how it’s going to be perceived and how they are going to take it.

But I figured the best thing to do was not give a s**t and then things will fall into place. I don’t know if there is any special message but I think there are interesting stories behind each song. But I never take myself too seriously – people can get out of it whatever they want. And that’s important – that’s good!

If I can make someone’s life better in any way, then I have accomplished something that is good. SR. Does going solo make you a little more vulnerable?

DR. Oh sure – of course. But I am ready for that and to be honest I don’t really care. If you don’t like it I’m sorry and don’t listen to it but if you do, then thank you.

SR. What can people expect from the show on Sunday?

SR. What’s the plan for the record after Frankie’s?

DR. Well, first I told my wife I was going to take a break, when I get home so that’s important – probably get in some golf. I have been out with my other band Hookers ‘n Blow and we added some of the other songs to our set. But yes, I would like to do at some point, at least a couple of weeks of shows exclusively dedicated to this record.

SR. You’re currently on a break from the world tour with GN’R and there seems to be some gaps for all of you in your schedules in the coming months. I’d be remiss not to ask you if the stars are aligning for a new album in the near future?

DR. I really don’t know – I have no idea. I’ll plead the fifth on that.

Dizzy will be playing new tracks from his album Rock N’ Roll Ain’t Easy as part of a free show at Frankie’s Pizza that starts at 5pm on Sunday. The event is free entry – but get there early as capacity is likely to be reached pretty f’n fast!