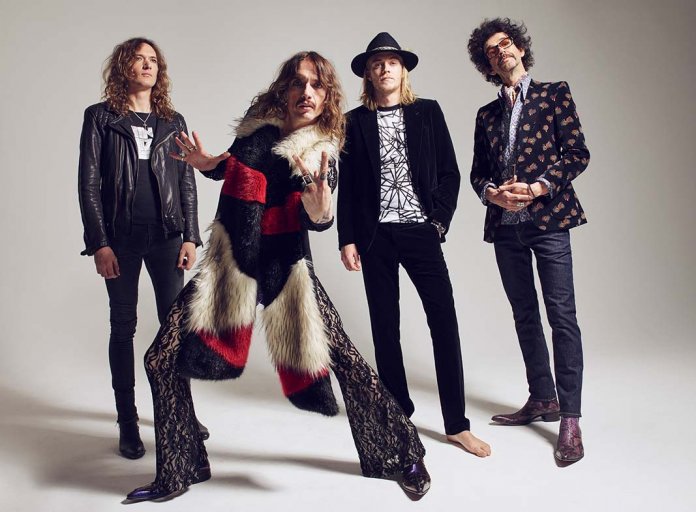 We had a chat with British glam rock band The Darkness‘ very own bassist Frankie Poullain in regards to the band’s new album ‘EASTER IS CANCELLED’ which has just come out (released October 4th) We also chat about The Darkness upcoming tour and takeover of Australia which is set for March of next year (2020).

SR. Excellent job on the recent album which you have just released titled EASTER IS CANCELLED.

FP. Thanks, we’re looking forward to seeing how it is received, we’ve put a lot of work into it and we’ve explored new territories we’ve never really done before such as our first ever ‘punk’ song called ‘Choke On It’ which might be considered controversial due to the nature of some of its lyrics.

SR. I couldn’t help but notice it was a bit of a ‘punny’ song. I hope the parents of younger listeners out there can cope with it. It’s naughty nature aside, it’s a real cool banger of a track.

FP. Thanks man. I think it’s the kind of thing which has only scratched the surface for us, it’s reflective of the sort of feeling that you get when you break up with someone and you’re trying to survive you know. I guess in many ways this is a break up album, because two members of the band went through quite heavy break ups – it’s in a way finding redemption to and through the love of the guitar.

SR. I think the break ups might have been a blessing in disguise, some of the guitar work on these songs is bloody powerful, there’s some epic riffs.

FP. Justin has really surprised me, Dan was behind the producers chair, but he does a lot of the acoustics, mandolin, and ‘fills’ in to create the textures to allow Justin to show off his natural skills. I think the song ‘NATURE’ is almost like our kind of ‘Love of My Life’ when I think of that song it has probably got one of his best ever guitar solos. He blows me away on that one. I think the 4 of us are really playing to the best of our abilities, plus we gave ourselves the luxury of spending such a long time in the studio for the best result on this album.

SR. It’s definitely a bloody good solo on that one, there’s some epic introductions to the songs too with nice drawn out acoustic melodies and riffs, you’d also never see some of the guitar solos coming on certain tracks. I wanted to ask you about the song ‘HOW CAN I LOSE YOUR LOVE’ and what it means to you.

FP. It was one of the early songs off the album, it was Justin reacting to the break up that he went through and him questioning his state of bewilderment, you know when you’ve broken up with someone and it’s just like ‘what the hell was that’. On another note the first song ‘Rock n Roll Deserves To Die’ has glorious guitar solos also, it’s quite easy to take in that one, at the end of the song he’s got like a rage where he’s trying to transcend – rather than hold on to the break up, it’s in Justins nature. He’s the kind of guy who refuses to wallow. It’s one of his qualities I most admire. When it comes to his attitude towards life, I see him as a role model.

FP. He is, everything that went down happened at the right time and he was able to put his all into music. It was great timing.
Have any changes been done to any instruments for this album? Different strings, guitars, pickups etc.

SR. Impressive. Would you say this break up sent Justins brain off to try new things on a different experimental level musically?

FP. Yeah, also each of us really put ourselves under pressure, we’ve been together almost 20 years now, so I think it’s like a legacy album, it might be the last conventional album we ever make, we might do a musical sometime after this. We wanted to do a highly charged concept album with this so, we wanted something that you will still listen to in 20+ years’ time.

SR. We wanted to touch base on the themes that you’ve used on the album, the focus on Easter – and the album-art featuring a muscular Jesus on the cross, can you tell us a bit about that, it is very interesting artwork?

FP. What we mean when we’re saying Easter is Cancelled – is let’s stop crucifying people, and what that represents is breaking free from the cross, it represents refusing to be killed off by the establishment, because Jesus was an anti-establishment figure, so it’s imagining a reality, of what would have happened if Jesus hadn’t been crucified, instead of him being crucified. A multiverse theory if you will, it’s to do with the possibilities of how things could have turned out, and how one small action can impact massively on how events unfold throughout history.

SR. What about the events that have unfolded for the band, obviously you guys have got to a great spot now, but what if you had done something different, are you quite content with how things are going? I heard you weren’t so fond of touring at times.

FP. Good question, yeah, you’re right, it’s good that you pointed that out, we talk about specific events, but in terms of touring I guess as you get older, it gets tough and touring is hard. The thing that makes touring worthwhile is when you release an album, performing the whole album live from start to finish with visuals, synchronized.

SR. We wonder then are you looking forward to coming over here and playing this album in its entirety?

FP. We couldn’t be more looking forward to it, to performing this album because it is a challenge; it is nice to have a challenge there, rather than just doing another show like all the others, we really need to challenge ourselves, this is almost like a reinvention.

SR. You’re steering this pressure on yourselves aren’t you, is that right?

FP. It is a kind of branding exercise, it’s our responsibility, putting pressure on ourselves to prove that we’re actually relevant and to prove that rock ‘n roll doesn’t deserve to die. All rock ‘n roll bands should be asking themselves ‘what are we bringing to the table’, are you making your audience stimulated, making them wonder about the world, you start thinking about this kind of thing as you get older you know.

SR. I wanted to ask you about the song ‘Heart Explodes’, tell us a bit about it.

Heart Explodes is a big song, we did it on the Ed Sheeran tour, we did 6 dates with him , it’s kind of like our Radio Gaga, our song that people can really tune into and clap along to, it’s quite anthemic live, it’s one of the defining songs on the album, I think it will particularly appeal to female members of our fan base. It has them join in, in a very vocal way, whereas we men don’t usually do it, I’m really proud of that because I think it’s doing ourselves justice in a way.

SR. What about the song Lay Low, it sounds like a pretty deep and meaningful song. Can you tell me a bit about it?

FP. We created this scenario where it’s the late 50s and we’re all kind of partying there and it’s getting groovy, talking in posh voices. It’s the first time on the album I’m not actually playing bass too, it was the sound guy playing bass, because he is our old bass player and he is a jazz bass player, he played double bass on that one, so I was quite happy to take the back seat. It was the first time we’ve done that late 60’s sound kind of vibe you know. There’s 4 bonus tracks he plays on. This album is different in terms of the music we reference. Normally it’s 1970’s to 1980’s sounds, but on this album we’ve referenced everything across the ages.

SR. Can you tell us a little bit about your bass?

FP. It’s a Gibson Thunderbird from the early 90s, I think it was Gibson Thunderbirds around that period that really sound nice. I’ve had it for 15 years, but it’s 30 years old, it’s finally started to sound worn in and weathered. The neck has been broken 4 times, and it had been glued back on a lot over that period of time, finally; the last job the glue wasn’t enough. So we had to put some metal rods in it, and I was really worried that it might affect the sound, but it hasn’t so I’m really happy with it, I have a strong connection to that bass man. I feel that bass has so much personality, it’s kind of like me, stubborn and awkward, and you know, broken. 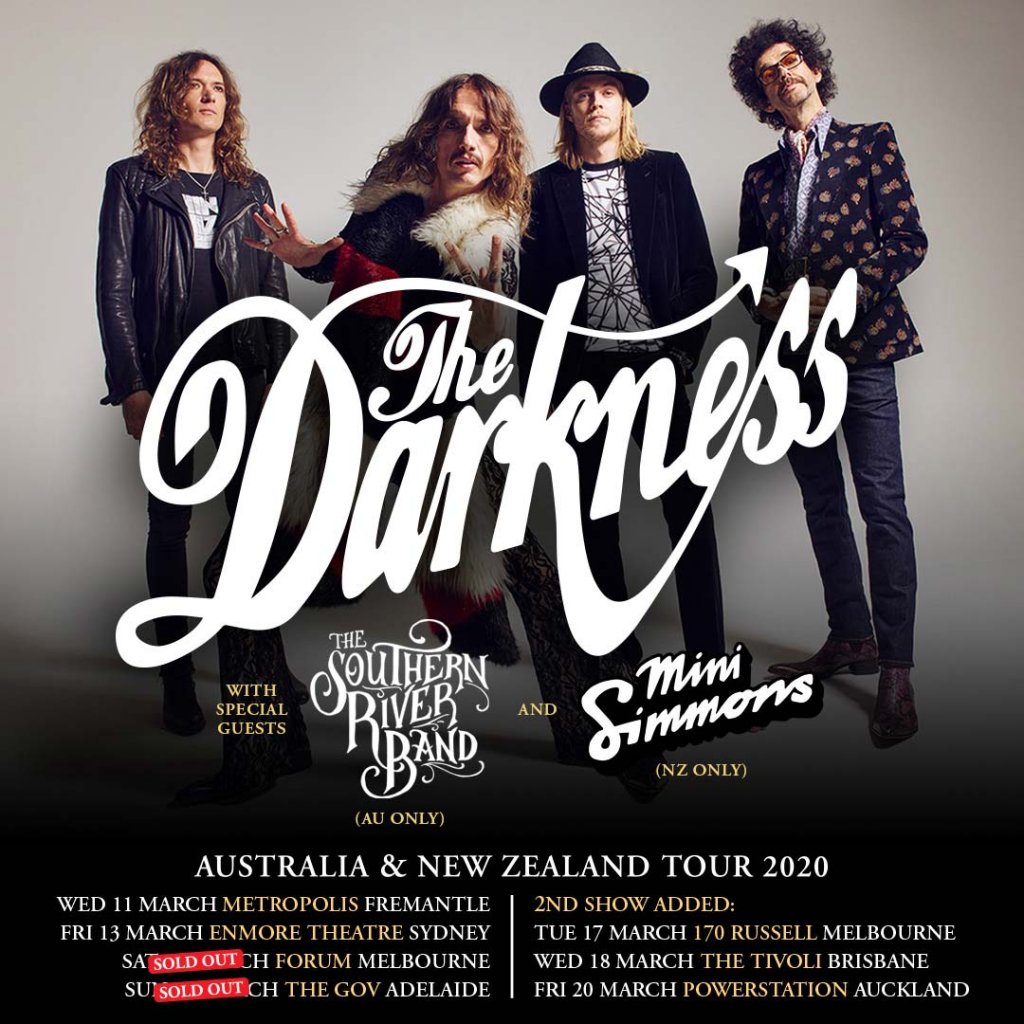