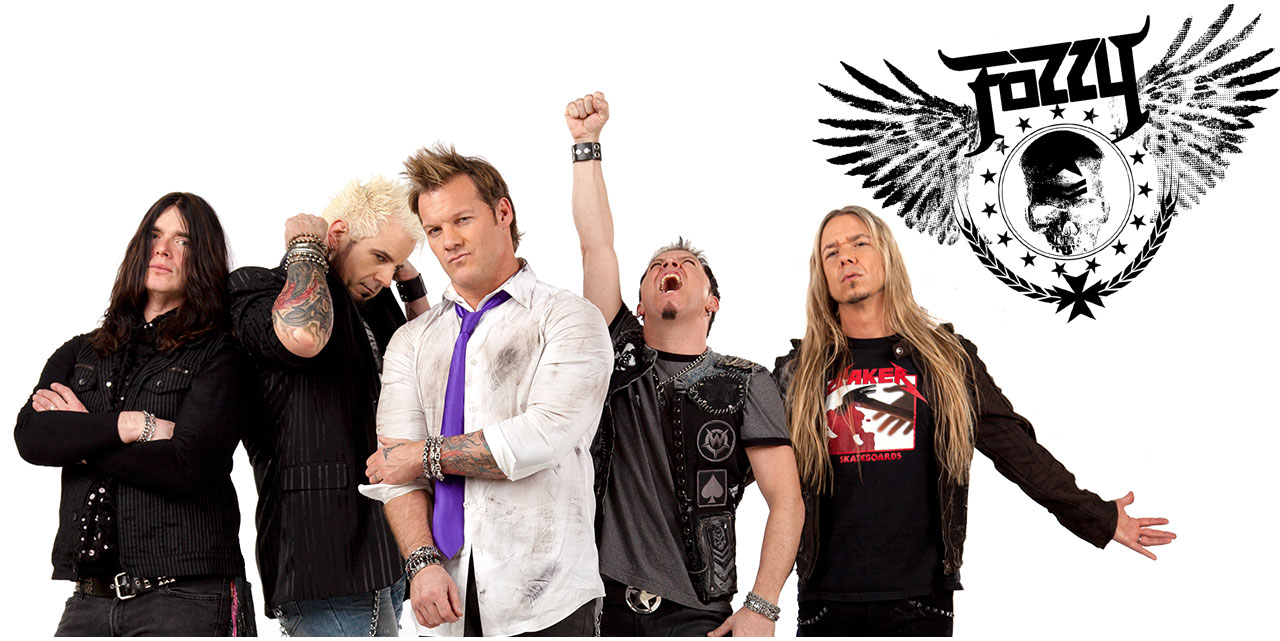 After a successful double visit to Australia in 2013 to play at Soundwave in February and to support Steel Panther at their Spreading The Disease tour in December and fresh from playing at Download 2014, Fozzy are back this year with their sixth studio album “Do You Wanna Star A War”, set to be released in Australia and New Zealand on July 25th.

To find out more about the album, and thanks to our friend John Howard from Bullet Proof, we had the chance to get in touch once again with Chris Jericho for another epic interview that can’t be missed, as we talk about the songwriting process for some of the songs, working with Michael Starr, playing Download Festival and obviously the WWE, including his opinion regarding the current situation of CM Punk in the federation.

SR. You guys recently played at Download Festival. What was the highlight of that show? CJ. It was basically just one show at Download, so we played and did a bunch of press and then comeback.

The Download is such an amazing experience, this is the third time we play there. I always judge the evolution of the band depending on where we play, so the first year we were at those small size stages, a couple of years ago we played on the second stage and this year we were on the main stage!

The fact that we played on the main stage was a huge thing for us, as we were in front of a massive and amazing crowd where you don’t know what is going to happen, so we rock and played our souls and was great, such an amazing experience.

SR. Now let’s move to your new killer album ‘Do you wanna start a war’. What would you say are the key differences between this album and your previous release ‘Sins & Bones’? CJ. The previous record was a big step for us to know where we were and how or sound really is, very melodic and very heavy as well, so we kind of focus on the same elements, the same feeling for ‘Do you wanna star a war’ but the big difference is that here we just wrote songs and if we liked them we just played and recorded them, without really worrying about the genre of them. That’s why some songs are heavier or popier than others, or even weird and that makes this record more versatile and with a lot of variety.

If you look at for example some Queen records, they also have heavier, popier tracks and all are great songs and that’s the direction we wanted to aim for.

SR. Do you feel this record was easier to make than the others?

The longer we take during pre-production, the bigger is the amount of songs we get, as we really wanted to make this record even better than Sin & Bones, because that record did a lot for us, so we wanted to take it to the next level.

SR. Do you think Fozzy is at its best moment now? CJ. Every band always say that when they release a new album, and we are not the exception. However, I feel ‘Do You Wanna Star a War’ is our best one, because it’s different, it’s more versatile and it’s a natural evolution for the Fozzy style.

I definitely think this is our best record and it will be a game changer for us, as we found who we are as a band, sound-wise and as a performers. Hopefully it will take us to a new world in terms of production and fan base, so I’m really excited about it, as finally people will be able to listen to the new record, so we are very anxious to see how the Fozzy fans and the general audience react to it as we are proud of the album and we think it’s our best release so far.

SR. “Lights go out” was the first single of the album hitting social media. How was the fan reaction to the song?

CJ. Off the charts! Huge! We were so glad people liked it, despite being a little bit different from other songs, even more poppy if you wanna call it like that, but still kind of sexy, weird and heavy, which was crazy, because it took a lot of people by surprise, even people who was unaware of us was like: “Wow! That’s Fozzy!?”

It took us a bit to get the ball rolling, but now we are sure many doors will be opened for us.

SR. M. Shadows collaborated as a guest with you for Sin & Bones, and now you guys got Michael Starr from Steel Panther on the song ‘tonight’. How was working with him?

CJ. As you know, we toured with Steel Panther in Australia last year, and it was an amazing tour, we had so much fun with them. They are a fantastic band, and an excellent group of guys and not only a comedy thing. They are so much fun to watch, they are great musicians and that’s why everything for them works.

Michael, asked us if he could be on the next Fozzy record, and we were like: “Ok”, so whenever we have somebody on our records as a guest, it’s never as a stunt, we don’t just said: “Oh let’s put Michael Starr on the record to see what happens”. Michael was there to help us with the song to make it better. Actually, when Michael asked us to be on the record, “Tonite” was already written as a very kind of power popy cheap trick take of a song, right of its alley and it was just perfect for him, so he sang some amazing back vocals in the chorus.

“Michael (Starr), asked us if he could be on the next Fozzy record…”

He (Michael) is one of the best singers of rock right now, and he added so many things to the song, a different something, a different tone and sound to the chorus taking the song to the next level, like M. Shadows did before with “Sandpaper” and Phil Campbell did with “She’s my addiction”.

Michael was just perfect for that tune, for me it feels like it was meant to be!

SR. Is the song “Bad Tattoo” based on a personal experience of any of you?

CJ. (Laughs) I’m guilty as charge for that song, as those are my lyrics. I love the concept of that song, because as soon as you hear it as a title, you feel like it is a Poison song, a kind of a glam rock type of track. Answering the question, we have seen bad tattoos literally, but I wrote that figuratively, because you know, everyone had that bad relationship you have been in, where you know it was wrong, but you could not resist, so once you have that “bad tattoo” it would never goes away as it is kind of embedded in your brain as a memory forever, like a little tattoo, which I think is something everybody can relate to.

I wanted to write this song a little bit more relatable and about life, because I’ve written a lot about fantasy stuff, or song like “Storm the Beaches” which is a 11 minutes song from World War II.

I think “Bad tattoo” is a perfect representation of what I wanted to do on this record, because yes I can relate on that, because I have a few bad tattoos too, as I’m sure you and everybody has as well and I love the idea of the double meaning behind it.

SR. Speaking about your podcast, “Talk Is Jericho”, one of the most commented episodes on social media, was the one you had with Dave Mustaine as a guest. How was that experience? CJ. It was great! I’ve known Dave for many years already, and you can always judge people by how they treat you, and Dave has always been great with me, he is a fantastic guy, amazing songwriter and in my opinion almost underrated as a guitar player, because people forget how awesome he is as a guitarist.

Dave is also extremely smart, and also very humble. He is not the arrogant monster some people think he is, and I really enjoyed having him on my show. Actually, it was really easy to get him to be part of it, because usually you have to deal with publicists and the guests cancels or changes the time and with Dave was perfect, because he approached us, so we gave him the time and all went amazing, making that episode one of my favourites so far. It was so easy to get it rolling and done thanks to Dave.

SR. Obviously, we have to ask you about the WWE…What’s your personal opinion about the whole situation of CM Punk quitting the federation.

CJ. To be honest I don’t know all the facts of that situation, and it’s none of my business, because I haven’t been there in a year, so I’ve no clue of what was going on behind the scenes. However, all I know from my own experiences, because I think six or seven years ago I did the same thing, although my contract was still valid, but I left.

I was gone for like 2 and a half years because I was burned out, I did not wanna be there anymore, I was not performing and I was not getting what I was expecting to get in term of storyline, so that’s why I left in 2005. So, if CM is going through the same thing, he really doesn’t have another choice but to leave, because if you don’t wanna be there, don’t be there, end of story as there is nothing you can do to change that.

I’m sure CM Punk will comeback at some point, rejuvenated, bigger and better than ever and until then I wish him the best. SR. Why you have never used a Fozzy song for your Y2J intro at the WWE?

CJ. My ring song is very iconic, very identifiable, and I would not change it no matter who it was behind a new potential song, even if Paul McCartney or James Hetfield were the ones who wrote me a new ring song, I would not change it, because “Break the walls down” is an iconic entry music for me, so It would not feel right coming out with any other song…They tried before, and just did not work.

SR. When we will see you back in Australia? Any promo tour for the new album coming up?

CJ. Definitely soon. We had such a great time there last time, playing twice in 2013 at Soundwave in February and then with Steel Panther at the end of the year in December.

Hopefully, we can come back for Soundwave 2015 and if that doesn’t happen, we will come back on our own. No matter what, we will manage to be back in Australia, as it’s very important for us to come back and play these new songs and to continue to grow, as it has been amazing to see how our fan base is growing down there.

Fans can now pre-order the 12-track album at iTunes and receive an instant download of the song “One Crazed Anarchist.”

“Do You Wanna Star A War” will be available in Australia and New Zealand on July 25th!