Northern Lights is a competition and invaluable opportunity for up and coming bands and artists to have the chance to record their music, be part of Reykjavik’s Iceland Airwaves Festival and to also network with industry professionals in Iceland. For the last five years, it’s been run by the lovely folk of FBi radio – a platform in which local artists and bands can send their music and have that extra boost of recognition where songs are aired to lovers of good music.

Being an independent organisation, FBi radio has been one of the most recognised youth broadcasters and has helped keep the passion of Sydney’s music, arts and culture alive. Despite certain challenges such as the city’s lockout laws, FBi Radio has still remained strong. We caught up with Music Director of FBi Radio Stephen Goodhew to learn more about his role, how the Northern Lights competition formed and his advice for musicians staying motivated in the industry.

I know that you mentioned in the press release that you were drawn by FBI Radio’s culture. What motivated you in the first place to apply as a volunteer for FBI Radio and what sparked that interest?

Well, originally I was in a couple of bands and I heard about the internship when the girlfriend of one of my band members suggested to me and said, “Hey, this could be a good network opportunity.” So I applied. It was actually late one night and I spent hours writing up this really good application on this web page that by the time I clicked submit, the session had timed out and I lost everything. It was like one in the morning and at this point and I was like “Oh fuck.” I ended up just writing it out really quickly from memory and submitted it.

I didn’t expect to get anywhere with it but I’m glad I did make the decision to resubmit it because my life would probably be in a really different place right now if I didn’t. So I got the internship and it was a really cool place to work in. I think I had this idea in my head that going into it might be a bit scary – full of super cool hipsters – much cooler than I was but it was the opposite of that. It’s just a bunch of music nerds who are very enthusiastic about what they do, who care about independent music and local culture and that was something I was happy to get on board with.

What I love about FBi Radio is you guys help and support those bands and musicians who are in the local scene right now and obviously with the Australian music industry, we’re quite small but we’re growing and evolving constantly. It’s really amazing to see bands within this scene just grow. What else is rewarding about your role?

One of the most rewarding parts of my role is having  the opportunity to discover new music and give it that first leg up before anyone else. You know, really see the value in it. There are many artists that we’ve done that over the years and they don’t always turn out to be the big artists but, just because an artist doesn’t blow up doesn’t mean that there’s no value there. I really get a kick out of coming across some of those gems early on and giving them a leg up and then seeing what they do from there.

I think that’s the difference between mainstream radio and FBI Radio. You’ve given an opportunity for an artist to promote their music to the right audience.

Yeah, totally. It all doesn’t make sense to me. It’s just cool to see good music getting supported just because it’s good music.

“Look, if you’re an emerging artist and you’re finding your place in the world, do it for the love of it.”

Probably about five or so years ago, FBi has a very keen supporter who has supported us in a number of ways financially in the past and he wanted to do a cool project so we were definitely up for that. After doing some brainstorming, we came up with the idea of sending some artists over to Iceland because really, it’s about as far away from Australia as you can get before you have to start coming back again. It’s just such a worldly place. I think there’s a reason why in a lot of TV and film – whenever they have to film ‘other worlds’, like alien planets or whatever – the reason that they do that in Iceland is because it’s unlike anywhere else in the world.

Australia in its own way is a unique landscape; it’s a unique country and we thought it’d be cool to send some artists to something that is kind of like the exact opposite of Australia; to seek some inspiration, to meet some people, to play in front of an industry. For us, that sounded like a really rewarding experience [and] it would offer artists an opportunity to grow in ways that they might not get here in Australia and that’s kind of what we were thinking of when we came up with the idea.

What advice would you give to a fellow musician to keep motivated and stay resilient in this tough industry?

Look, if you’re an emerging artist and you’re finding your place in the world, do it for the love of it. That’s the most important thing because if you’re doing it for adulation or to crew as many fans as you can, then you’re never going to be fully satisfied. You’re always going to be ending up moving the goal post and the fact is, some people are going to like your music, some people aren’t going to like it. At the end of the day, if you enjoying writing, if you’ve got some good mates you can do that with, if you love playing live then that is the most important thing and anything else that comes after that just counts as a bonus.

Do you think platforms such as Spotify and Apple Music help local musicians promote their music? Because local artists don’t get much out of a stream from a listener.

Yeah, you don’t get as much money from a stream but I think the reality is that this is the way the music industry is heading. For the first time ever, global streaming sales have decreased CD and download sales. While I think artists could be paid more, depending on the deal you have – whether you’re an independent artist or the deal you have with your label – you can still make some money out of it. I know bands who consistently earn enough from streaming to pay their rent every week. If you get in a good playlist or something, that can bring you millions of extra streams and extra fans all around the world which you might’ve not previously been able to connect with. So you know, there are positives and negatives. I think the format is still evolving and I’m hopeful that in time, some of those issues around artist reimbursement might be re-addressed but it’s not all bad news.

Because you’ve been a music director for FBI Radio for three years, what would you say has been the main highlights for you in your career so far?

I’m not sure, to be completely honest. I enjoy learning. I enjoy being challenged. It’s not a small role so I guess being entrusted to take over the music directing over a station like FBi was a big deal for me. It was an opportunity I ceased with both hands and I love the challenge of it everyday and just being able to discover new music is a never ending treat. We’re looking for an exciting new Australian talent to champion on an international scale.

We’ll fly you to Iceland to play as part of the official lineup for Iceland Airwaves Festival in Reykjavik, joining the likes of PJ Harvey, Warpaint, Julia Holter, Kate Tempest, múm and Liima. The festival runs 2-6 November 2016.

As well as flights and accommodation, you’ll get to network with international industry professionals, spend a day recording in Sigur Rós’s Sundlaugin Studio, and hopefully get to witness the Northern Lights!

Back in Australia, you’ll get to spend three days recording, mixing and mastering your work at Studios 301.

To enter, you must be an Australian resident aged 18 or over. Entry is open to emerging solo artists and bands.

Be sure to read the full terms and conditions before entering the competition which can be found HERE.

To enter the competition, go to: http://fbiradio.com/northernlights/ 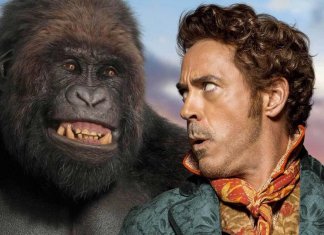 0
Dolittle is the latest attempt to put Hugo Lofting's series of children's books about a veterinarian who can speak with animals into moving picture...