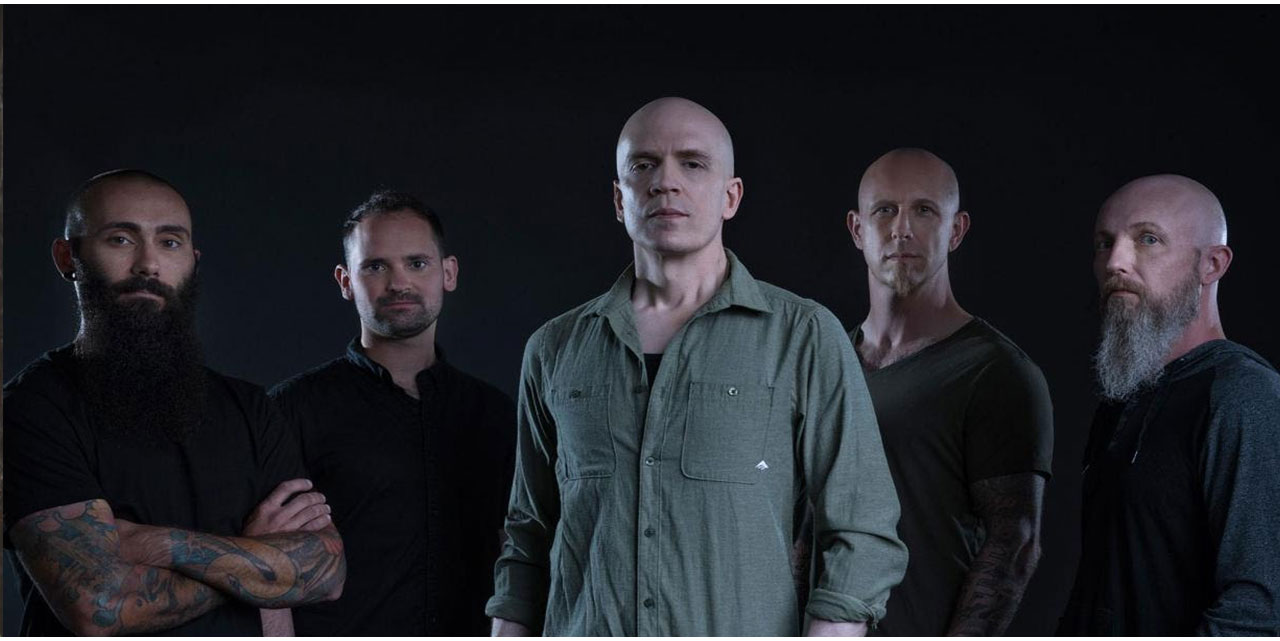 Devin Townsend is notably one of the most versatile musicians of this day and age, having an extensive variety of genres and albums, influencing others by the thousands with his awe-inspiring music. His latest venture with band Devin Townsend Project entitled Transcendence has been making waves since its release topping at #10 on the ARIA charts.

DTP are coming back, touring the country this month and thanks to Tim Price from Collision Course, we got the amazing opportunity to have a chat with Hevy Devy himself ahead of the shows.

SR: You’re coming back to Australia with DTP, I know we are very excited to have you. How are you feeling leading up to the tour?

Well, I’ve been talking about this for the past couple of hours and I’m so fortunate to have the life I do. I’ve got a great home life, I’ve got a great touring life, but the one thing that is always daunting for me is changing gears between the two. I am looking forward to getting those first two days of chaos over with and the first part of this run in America.

But coming to Australia, it’s awesome for me. And I think the thing is, because the flight is so brutal; the cherry on top of the whole tour will be finally getting down there again and meeting up with friends. I love it, I think it’s great.

SR: You often do a lot of workshops whilst you’re touring and while you’re here you are doing a seminar in Brisbane and an in store signing and book reading at Utopia Records in Sydney. Do you ever stop being amazed with how much people want to learn from you as a musician?

Well I don’t think about it to be honest. I mean my goals I guess are; if I have learned anything I would like to be able to share that with people for the simple fact that I want to hear what other people have to say. We are in an environment in general where the music industry and art tends to be really conservative because there is no money. So a lot of the rhetoric that we hear is that you need to be successful you need to adhere to certain parameters, but that just breeds a lot of the same shit. So my objectives in terms of talking or teaching, are not necessarily to be the teacher but more to try and promote whatever it is I’ve learnt to keep a creatively free angle going. It’s what I can do to contribute.

I love to see people being creative and I love being in creative environments, again I just want to help and it doesn’t bother me if people do or don’t listen. It’s not really my objective. It’s sort of an abstract answer I guess. I don’t really care, I love that people listen but I don’t seek it. I don’t think?

Conversely I hate being conspicuous. I’ve chosen a really crazy career path for that frame of mind. I find that the recognition of what I do – I like to be respected for what I do but I don’t want to be viewed for any more than I am. As the career grows, it’s easy for people to interpret artists for what their worth is. So I don’t need my ego stroked, but I’m also super insecure; like holy shit I’m a singer, it’s just part of it. I think if I was completely a secure person I wouldn’t be doing music, my need for my emotion outlets to be valeted are rooted in super deep insecurity.

It’s a conundrum but it’s also one that I’m proud to say I don’t spend a whole lot of time worrying about.

SR: You’ve recently been touring and reviving Ocean Machine with DTP for its 20th anniversary, will some of the older tracks like Funeral and Bastard be played throughout your Australian tour?

I don’t know. I think that we’ve got a set list that we’ve got for America that we’re doing next, then this Gojira/ Opeth thing that we’re doing then we’re coming to Australia. I think after talking to people from Australia today there is a part of me that thinks we should consider that but I want to get the American tour done first. I tend to monotask like the motherfucker and that is to the detriment of everything other than what’s immediately on my mind. But I’ve taken a note today, so I’m going to give that a solid maybe.

It’s interesting having as many albums as I do, and trying to put together something that works for the band and myself and the audience, but also people that have an emotional investment in any of these things. It’s not unheard of that we can make it work, it’s more…well to be perfectly honest about remembering [laughs] because it’s like 20 days from now. That’s a whole other lifetime.

SR: You’ve said in interviews about how from albums previous to Transcendence you get very fussy and particular about everything wanting to be perfect, whereas with Transcendence you let the band take the reins a little bit more. Do you feel for the potential next album you’ll be able to let go a little easier?

Well I think that depends because I don’t know quite what the definition of the next record will be. It could be DTP, it could be a solo album, it could be an orchestra thing, and it could be me involved with a whole bunch of other musicians. I do know though, that the experience of Transcendence had provided me with a lot of insight of how I react to other situations, and the short answer is yes, of course. It’s funny too because when I think of myself being a perfectionist the best part about that is that I’m fundamentally flawed, so I’ve said it before and I’ll say it again ; my perfectionist traits result in nothing but a constant undercurrent of irritation because nothing I ever do will be perfect. On the plus side it means that I’ll keep working [laughs]. It’s like the carrot in front of the stick in front of the donkey right?

SR: You have had many projects scaling through all different types of genres, do you, or have you had any ideas to do an album that no one would really expect from you?

Well it’s anything that I’ve done in the past that are kind of peculiar considering what it is that I got known for; I didn’t do those to be provocative in any way. The thought process isn’t “I should do something that I haven’t done before because that would really shock people”, conversely it was “shit. How am I going to convince people that this is a direction, which is something I really feel like doing, is worth listening to?”

I think the only way that I can get different styles or sounds into people’s heads is if it’s something that comes to me if it is a compulsion to do so. So having never done like a hip-hop record, for example, if I chose to do that it would only be because that’s all I wanted to do. It was all signs pointing to Funky Brewster or whatever it is I would do, but because that hasn’t happened, I haven’t even thought about it.

I’m so in the dark in terms of my own creative process, it’s kind of like a treasure hunt in a weird way. I just keep poking around and writing a whole bunch of shit until something lights a fire and then I just get into that channel and ride the lightening until you get to its end. At that point you never want to hear it again [laughs]

SR: You’ve also said previously that your Casualties of Cool record was your favourite, is that still the case?

I don’t think so. I don’t think that anything I’ve done holds my attention, really. If I listen to it now, what I feel is that it is a document of those frames of mind.  Everything I do is ultimately autobiographical and I figure it out in hindsight I guess. When I think back to Alien; I think back to my mother-in-law. When I think back to Deconstruction; I think back to a death of a friend that was a big problem in my life. There is all these things that I’m reminded of when I hear the records and I never think to myself “oh I love that”, it’s more like “is it accurate?”, and if it is then the most I can say about anything I’ve done is that I’m satisfied with it.

Other than a couple of records I’m satisfied with it all. But it’s all transient, it’s all really fluid.  I really loved Casualties, but the things that made it so important to me were solved as a result of doing it. It’s simply but articulating that vision and by participating in the things that inspired it, on the other end of that record what I needed to learn – I had. Therefore it ceased to be important to me in terms of daily listening, then the next thing becomes important.

The end game of trying to reach the next step of my own personal growth is so enticing to me, it becomes my lifeline, because I just don’t think I’m smart enough to know where I am at when I’m doing it but the music while I’m writing it is so self-conscious because it is coming from a place that isn’t conscious. So my subconscious speaks to me much louder than my fearful self would ever be able to do. So id listen to the music intently to find out where am I at? What am I doing? Then at the end of it I think it’s just such a great articulation of that frame of mind, then it takes me 6 months to a year to absorb that lesson I guess, then you move on.

Well I don’t wish I’d written any song that I didn’t write. But I would say that one of the most beautiful things that I’ve ever heard, even to this day was a song from a collaboration between Ravi Shankar and George Harrison. It was on the album Chance of India, the song is called Prabhujee. It’s in Hindi but the first time I heard it, it just crushed me and I don’t understand what they’re saying but there is something about the intention behind it that resonates with a type of settlement personal energy that I hope one day to achieve. I don’t wish I’d written it because it would suck if I wrote it [laughs].

Get your tickets for Devin Townsend Project : Tickets at MJRPRESENTS.COM 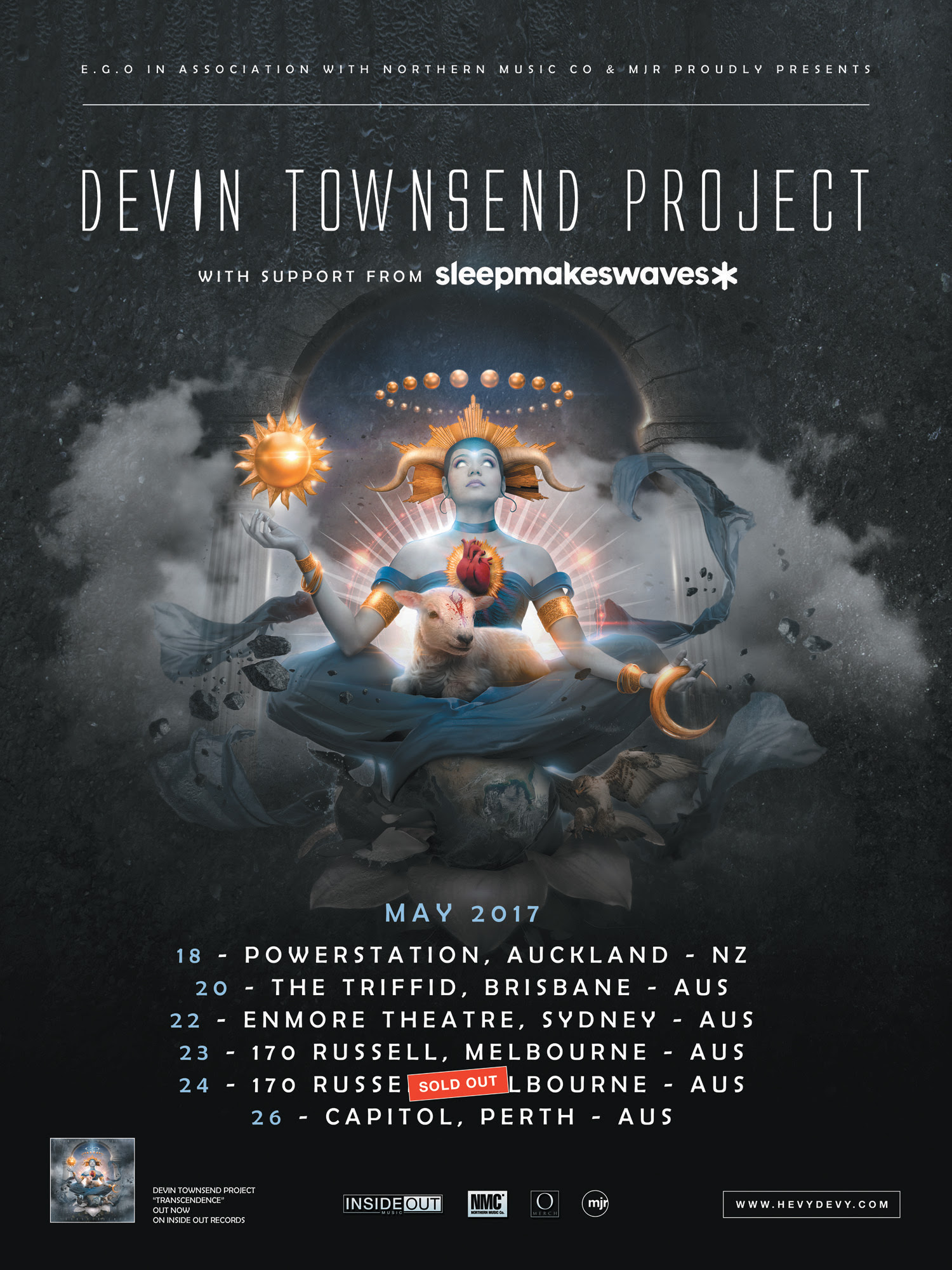