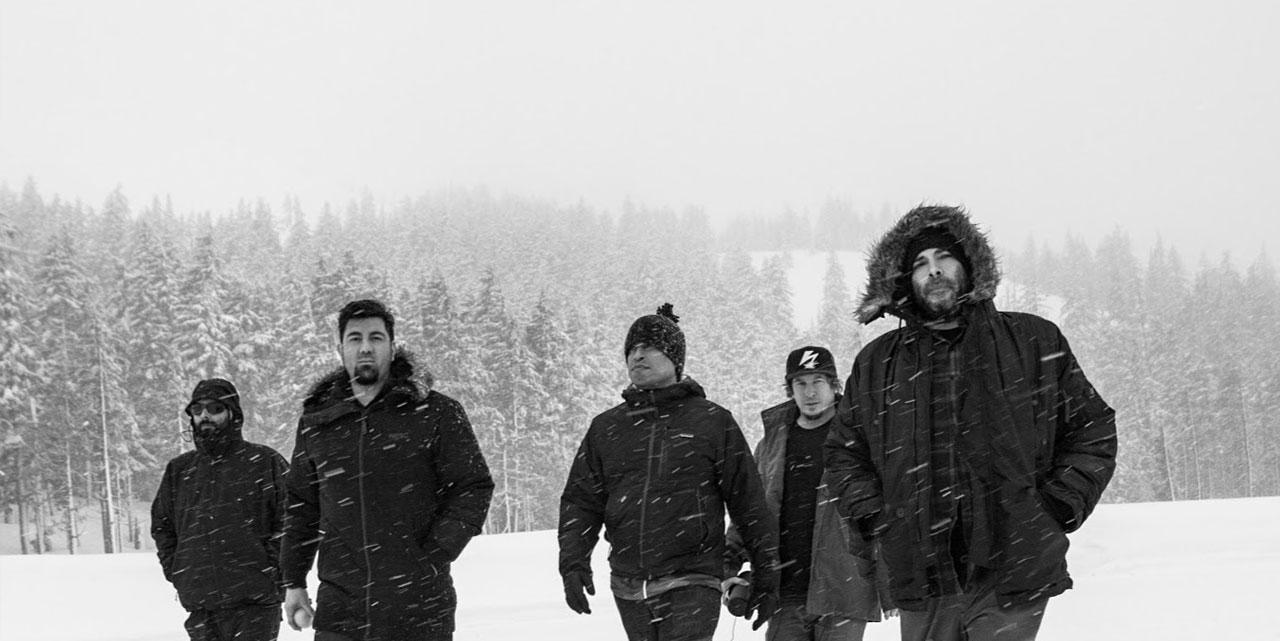 April saw the release of Deftones’ superb eighth studio album, Gore. Reaching #2 on the Billboard chart, as well as hitting 1st place on the Oz/NZ charts, the album has received widespread praise from critics and fans alike. This November, the alt metal powerhouse is heading back to our shores to play a set of dates, supported by local favourites, Karnivool and Voyager. We had a chance to speak with drummer, Abe Cunningham, about Gore, the band’s history, and his own stylistic beginnings and evolution.

SR: Gore hit #1 on the Australian and New Zealand charts and also reached #2 on Billboard. How do you feel about this album and what’s it been like to see it being received so well?

AC: First of all, it’s our first #1 anywhere ever in the world. We’ve had some #2s, but when we heard that, we were just through the roof. It’s pretty exciting. For ageing rockers, like ourselves, it was very, very cool. Those things come and go, you know, but as far as the record goes, we’re just happy to still be around doing what we do. We enjoy the process, you know what I mean? It’s not always easy, but here we are. We’ve released another record and we’re out doing our thing. And it’s a great feeling.

SR: The last few albums have quite distinctive styles. How different were the writing processes for Diamond Eyes, Koi No Yokan and Gore?

AC: It’s been pretty well documented, over the years, that writing and making albums over the years sort of gets a bit tedious. Sometimes it’s great; sometimes it’s like pulling teeth. But we’ve pretty much adopted a whole new way of doing things with Diamond Eyes. That was probably just due to the situation – Chi’s accident, and his state at the time. It really made us focus on getting things done, ‘cause you know we’d wasted so much time. It’s part of the deal. It happens. But that was the catalyst for us to fix it – just to get it going, man, and to stop screwing around. It made us appreciate time and appreciate each other. That being said, we did that record very quickly, but we were very focused. And that whole mindset pretty much went straight into the writing of Koi No Yokan as well. And it worked great, too. We were fast and focused. Not too fast – we still wanted to make quality stuff. We weren’t fast for the sake of seeing how quickly we could do it. We were just being aware of time and not screwing around.

So that worked great for those two albums. Then, with this last one, we sort of adopted a new style with that still in mind – still being efficient – but we sort of took two weeks at a time to write songs and see what we’d come up with. Then we’d maybe go out on the road for a week or two to play shows and then go home for a week. We were just repeating that process. It was a way of doing things for us: to write and be creative, but also be productive. So, we’d play some shows and earn a living and then go home for a bit. It was a new way of doing things, but it worked out well too. It took a bit longer, but all the while we were still in motion.

SR: You’re coming down to Australia in November. What have you got in store for your fans with these shows?

AC: Well, we’re breaking things up a bit now with shows. It’s not all just go, go, go all the time. I guess it’s part of the whole philosophy of staying sane and doing it right. It’s very important. For us to be able to keep on doing this we need to be normal and calm and also realise what a cool and amazing job we have. But we’re absolutely thrilled. That’s also going to be pretty much the end of it for the year. We have a couple of things coming up and then we head to Japan very quickly and then down to see you guys. And that’ll be the end of it for us for this year. Then we’ll start up again next year. It’s great. We have some Aussie bands with us and it looks to be a great time.

SR: You were talking about staying sane and calm before. You, Stephen, and Chino have been together for close to 30 years now. What do you put your ability to keep going through thick and thin down to?

AC: For us it’s pretty simple. As you know, it’s been well documented… There’s been all this crazy stuff, but it’s mostly just normal band shit. But I attribute it to a friendship, you know. I mean, we started as buddies with no great plan – just trying to figure out how to write a song and be a band. That’s the way it’s always been. It sounds pretty simple. I think everyone’s got their different motives for doing things, you know. But it was very pure and simple. We didn’t know anything. We know a few more things now (laughs), 28 years later. But we still have that quest to try to figure it out and write a better song and see where we can go and where we can take this thing. So, you know, it’s based on a friendship, man.

SR: In the past, you guys did a lot of covers and B-sides that ended up on B-Sides and Rarities and movie soundtracks. You’ve written 16 songs for Gore, all up. Will any of the 5 unreleased tracks be used in a similar fashion and will there ever be any re-recorded versions of past demos, like Crenshaw Punch?

AC: Mm, that’s a good question. When we released the different songs on B-Sides and Rarities, it was at a time when we were having a very difficult time as a band. Chino was out doing some other stuff and we weren’t even sure if we were a band any more. So, during that time, I went around to all these studios in town and got in touch with people we’d worked with and gathered all those songs together to release that thing. But we always recorded covers at the end of a session as a sort of tradition. It was just for fun, really. But it’s weird, man. Crenshaw Punch – you know, I think we may have played it once years ago. Maybe twice. I don’t know. But to re-record it might be fun. Who knows? I’ve never thought about that.

AC: Ooh, oh that old stuff? (Laughs) You know what? I don’t know. There’s never been any thought about it. You know, it’s funny though. Some of those songs are actually pretty cool, man. We were so young. We were babies. It’s really funny to hear you say that.

SR: Can you talk to us a bit about your style and how it developed? Although you’re obviously known as being a very hard-hitting drummer, you don’t really get into the double bass stuff or the ‘traditional’ metal style, for instance.

AC: I just think that if I play in that style, it’s not really my style. It’s not that I have anything against it. I just think that what I give to the band makes us be a bit different, too. And that goes for everyone in the band. No one is schooled in any way. We’re all self-taught and trying to figure out how to do it. It’s funny that that comes up a lot. Stef is kind of Mr Metal, you know, but it’s not to say that I’m not. For me, it should feel good and it’s about making asses wiggle, if you will. And that goes for male or female asses. I grew up on my parents’ music and a lot of old soul and R&B – all these different things. And that’s always felt good. Of course I got into metal as I went on and on, and I loved that stuff. But what I’ve been exposed to gives me what I have and that goes for anyone. But I don’t know. I think I like to do a little of things, but never too much. But who knows. For the next record, maybe it’s time to throw Stefan a bone and give him some of what he wants. Maybe.

SR: I understand that your stepfather was a drummer. Was he your first music coach and what were you playing in your formative years?

AC: Yeah, my stepfather was a drummer and my dad played bass. So I grew up around that as a baby crawling around – their gigs. It was mostly just local stuff, you know. It was the seventies and there were a lot of jams. And my mum was a chef so I grew up in kitchens and kitchens always have the best music playing. So that sort of thing was just always around. It was just a great way to grow up and I was exposed to what I think was really great music. So, as far as him giving me a couple of pointers? Yeah. But I just sort of looked around and tried to mimic what I saw or heard. I think that’s the way most people learn, you know? Playing along to their records and cassettes and CDs and trying to create their own style. But that’s what we all do. That’s what everybody does.

SR: As a drummer, you necessarily take a back seat. Is it ever frustrating not being front and centre and connecting with fans more directly?

AC: Oh, for me it’s the best seat in the house. It’s the best job in the house. Looking at the back of Stef and Chino… Chi… Sergio… I have to look at their back of their heads all my life. It could be a lot worse. I think there’s a lot of power in drumming – not just physically, but also a lot of control. You’ve got to hold it down. I have a million ways I could piss any of those guys off in a split second, you know? Start playing something too fast or whatever. It’s a very powerful position and you need to be respectful of that, too, and not be a power monger. So yeah, it totally suits who I am and what I’m all about. It’s a great way to express yourself. It keeps you very sane. You’re able to hit things all day long, not that I’m an angry person. But it’s a great way to get things out. I could ask for nothing more. It’s the best thing in the world.

SR: Do you have a message you’d like to send out to your Aussie fans ahead of the tour?

AC: Yeah, once again we’re beyond thrilled to be able to make it all the way down to see you guys. We’ve been coming down for years now and have had some of the best times of our lives. It’s time to create some new memories and we’re very thankful for your patience and we can’t wait to see you.