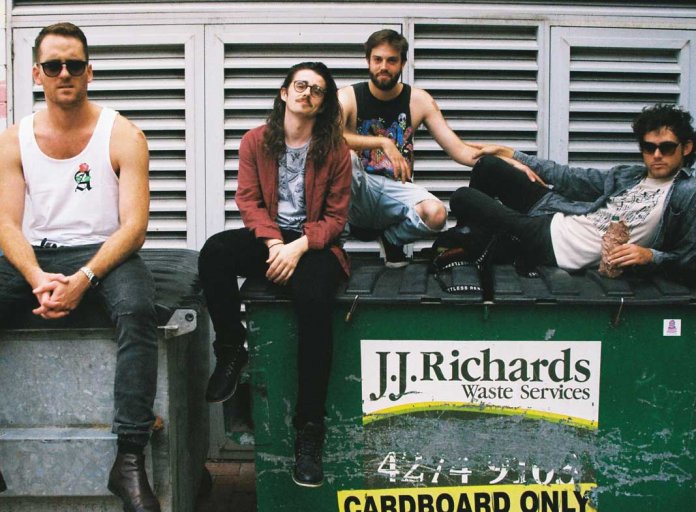 Decapitators have been taking over the Sydney rock scene over the past year, gaining fans with their garage style rock, bringing new life to the influences of the 80s and 90s.

Crystal Math is the debut single from the guys released last Friday and we here at Spotlight Report are looking forward to see what the future holds!

SR. Your debut single Crystal Math is about to be released, how are you feeling upon the launch?

I don’t know. It’s our first release so there’s not really any pressure. I’m just keen to get it out and move on. NEXT.

Your band history is very interesting in the way that it seemed to be something like a movie plot in the sense it’s just fantastic. What sparked the whole jamming as we travel idea?

I think I was always attracted to that wandering minstrel archetype and always tended to bring musical instrument with me whenever I went traveling. It’s a great way to get new material while you’re experiencing new things and feeling inspired. It’s also good for connecting with other travelers or a scene overseas, and especially productive when you have a traveling compatriot with a similar musical inclination to bounce ideas off. This is how Decapitators came to be. Side note: I recently brought a KORG microsampler with me to Europe which I awkwardly lugged around til I could actually find a use for it then found out it was broken. That was a poor choice.

What moved it forward into an actualised thing?

Other musical projects were finishing up and it just seemed like the right time to make it into a thing. The vacuum of space compelled us.

The part of your band history that I love the most is the recruitment of Matt and Tom which was within your drunken circles. Was there a song that you jammed on that was like a click moment when you realised these were the guys you wanted to be in a band with?

I think when we did a 4 hour rendition of Nutbush City Limits was the moment we realised this was for life. I didn’t even know the song at the time.

Was there any music you listened to on the trip that influenced your music / influences in general?

We had two CDs in the car on this road trip in Mexico and I think we may have listened to the Ruben’s ‘My Gun’ about 17,000 times. So as far as I’m concerned anything that doesn’t sound like that is good.

You’re also soon to be releasing a film clip, can you tell us a bit about it and what we can expect?

Yeah it’s a bit of a time. There’s some light nudity, and a boxing rabbit. Hopefully it reflects the sentiments of the song in an intelligible way.

What would you say to music fans to check out Decapitators?

Come get decapititititated. Oh, and we’re only a little bit metal.

What does the future hold?

Actually, was just consulting my scrying stone earlier this afternoon, and I saw wealth. Lots of wealth. That’s a vague term though. So… I’m not really sure what it was trying to say. I lost my magic 8 ball. That’s usually a bit more accurate.

What song do you wish you’d written?