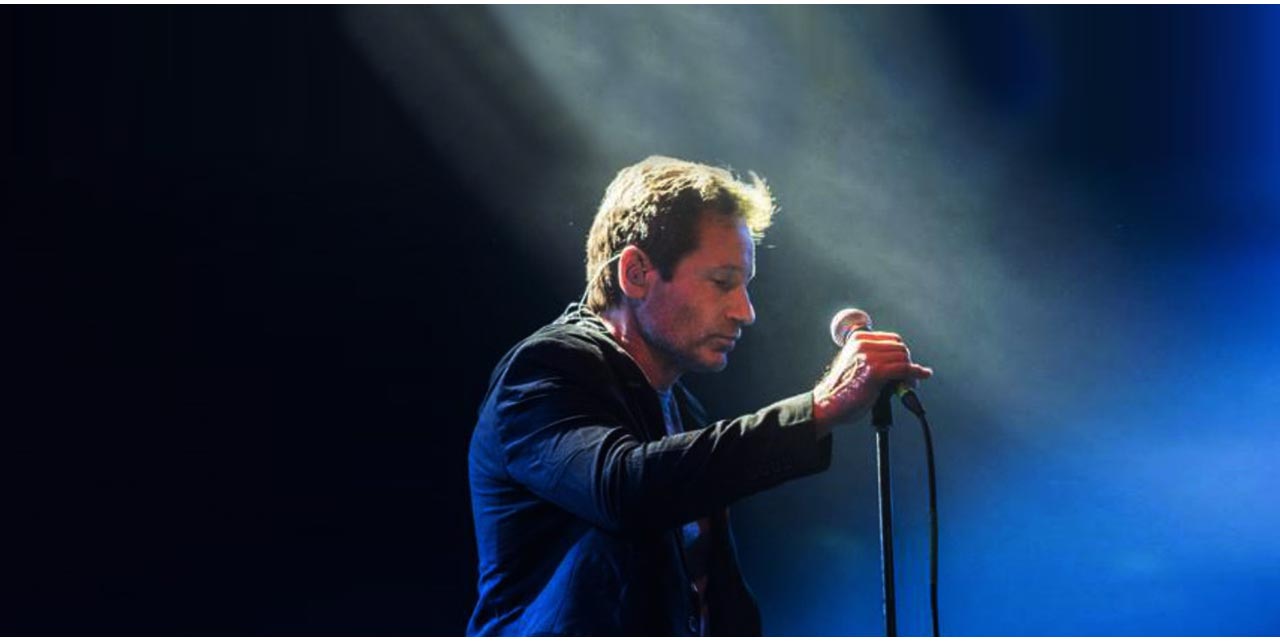 When he is not hunting down Charles Manson or finding if “The Truth is still out there”, TV and film star David Duchovny focuses his energy on music. The iconic actor has released three albums to date, with his most recent one “Every Third Thought” released on February 9th via King Baby/GMG.

Thanks to our friend John Howarth we had the unique chance to have a quick chat over the phone with Mr. Duchovny to find out more about his passion for music, working in comedy, and of course The X-Files.

SR. Thanks for your time David and congratulations in a successful tour so far. The reviews from New Zealand and Melbourne are great!

DD. Thanks. I’ve enjoyed the tour so far, people has been great and loving the shows. Melbourne is a beautiful city and now I’m about to go to the airport to catch my flight to Sydney.

SR. Speaking about your music, your new album “Every Third Thought” has been gaining a lot of praise. What motivates you to write music and when do you find the time to do it with your busy agenda?

DD. I always try to write things that are for to everyone, you know things that are universal, but also personal. For me it’s always all about the lyrics and what you want to tell people.

There are always times when you have an idea and you write it, despite being filming, or on the road, there is always a moment I can spend some minutes putting some things together to revisit them later.

SR. One of the most notorious things in your music, is the use of not very conventional sounds to generate a different vibe. Who were your music inspirations for this?

DD. There is not really a specific one, but for example we like to distort our guitars a bit more in order to do some more psychedelic tunes like Peter Frampton does. Obviously The Beatles are a big part of my life, and they also did a lot of experimentation in their music.

I like to think, my inspiration comes from the 60′ and 70’s music I used to listen to like Dylan. However, my intention was never to sound exactly like them, and I feel in “Every Third Thought” there is real evolution lyrically and musically from my previous albums.

SR. Your band has members from different age groups. Do you think the music changes and gets richer by working with people from different generations?

DD. Definitely is interesting, talent has no age and in my band, everyone brings something different to the shows. There is a mix of youth and experience that makes every show special.

SR. Speaking about your film career. You were lucky enough to work with Ivan Reitman in Evolution. How was to share the set with him?

DD. Ivan is a comedy genius, I mean, he is the guy behind Ghostbusters and for me is one of the greatest in American comedy. Evolution was a fun film to do, with a lot of work on location and Ivan was great at it. SR. From all the genres you have worked on. What would you say is the most challenging and why?

DD. Definitely comedy. Because you never know what the reaction of the public will be, it’s a bit scary to be honest.

SR. Well, you definitely did well in Zoolander as a the legendary hand model J.P. Prewitt.

DD. Thanks, it was definitely one of the good ones (laughs).

SR. Will we get to see more episodes of Aquarius?

DD. To be honest I’m not sure. I’d love to do more, it was a very interesting story and enjoyed my time there. I heard John (McNamara) wanted to do more, but at this stage it’s all on hold.

When I arrived to Melbourne, it was quite funny, because I turned on the TV and Aquarius was on it, so I’d the chance to check some one the episodes again…It was kind of cool seen myself on TV in Australia. DD. The best thing about it, is that I don’t need to explain it. I personally attribute all to the times the shows was released. I mean 25 years ago we did not have accessibility to Internet like the one we have today, so it caused the same kind of impact the Twilight Zone had back in the day, becoming a more cultural phenomenon than what we call today an internet hit that is “trending”.

I’d say that today, one of the closest things to what The X-Files are in terms of fan devotion is Stranger Things.