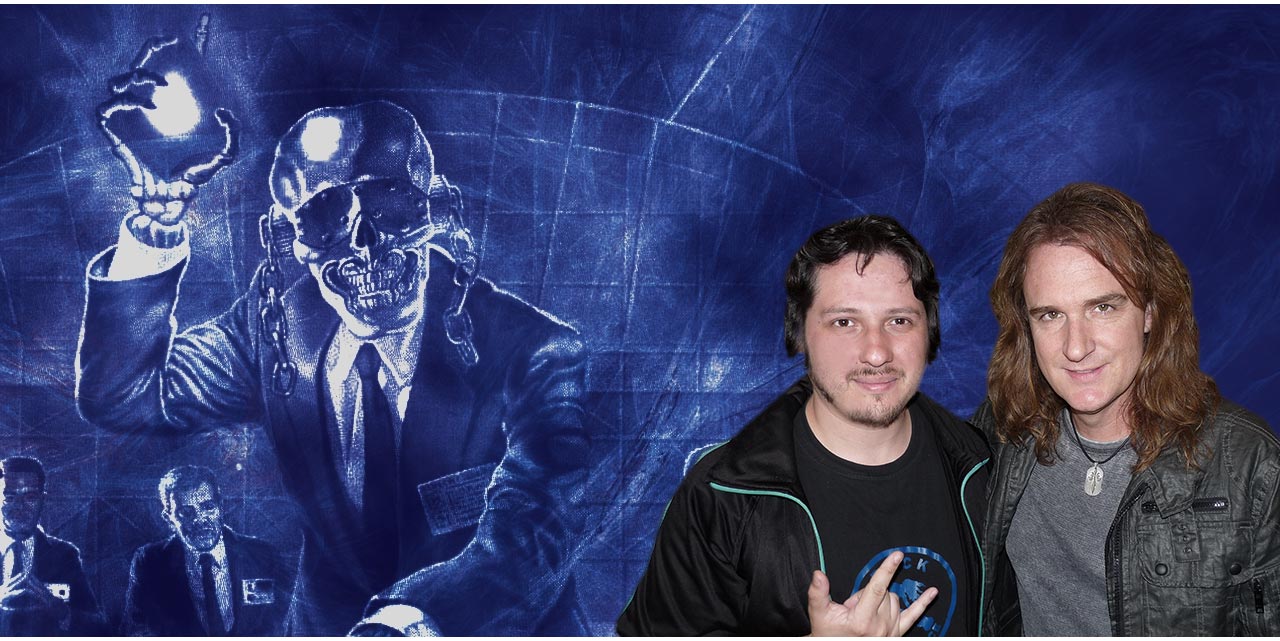 David Ellefson founded Megadeth together with Dave Mustaine in 1983, and with the exception of a short absence from 2003 to 2010, the bass player has been part of the band for multiple decades. “Dave Junior” has been playing with the legendary speed-metal band for 25 years and counting, while no other band member besides Dave Mustaine has lasted longer than a decade.

In many ways Ellefson is the yang to Mustaine’s yin; where the Megadeth-frontman has a reputation of being obnoxious, controversial and difficult to work with, Ellefson is known as a friendly, laid-back guy, so it makes sense that he is now moving in to spoken word-territory: Dave’ll be hitting Australian shores in March for a world first series of spoken word performances, where he’ll share anecdotes from his autobiography ‘My Life with Deth’ with his fans.

We got the chance to ask him a bit more about what to expect and to find out if during these performances he’ll bring some Vic Rattlehead-skeletons out of the closet about Megadeth’s tumultuous history.

SR. Why did you choose Australia as the first country to do a Spoken Word-tour? DE. The idea of doing a spoken word tour came from an Australian concert promoter, and I loved it. We started to talk about it last year, ironically it was right around the time we were scheduled to be here with Soundwave. I’ve never done spoken word before. I like taking chances and doing new things to broaden my horizon. I enjoy working with new people, especially with forward thinking people with out of the box ideas, so this is really great. I love the idea of getting into a new medium, like in this case spoken word, since there is so much you can do with that.

And I really wanted to come back down to Australia. I love being in Australia because it feels like being on vacation. Australian people have a unique spirit about them, and metal-fans in particular, so I’m really looking forward to it.

SR. Can you tell us a bit about what we can expect from your ‘My Life with Deth’ Spoken Word Tour?

DE. There’s a few things in the repertoire that I’m already preparing, as far as stories and the flow of it all go. The repertoire but should be loose enough for each evening to become unique. I know the cities in Australia are all unique with their own flair, so I hope that each performance in each different city becomes a unique night. When you prepare a show with a band, you prepare your repertoire, the setlist, the sound & lights, but because it is just me this time it becomes much looser.

I like the idea of being able to talk pretty openly about my personal life, my life with ‘Deth, and everything else that goes on around it, and it also gives the audience the chance to do a Q & A. When I do bass clinics the Q & A is usually one of my favourite parts, since we get to talk personal and we can open up for discussion – and I love doing that stuff.

“I was very happy to see all these big things and these huge shifts happen in Dave’s (Mustaine) life. He was able to process and work through a bunch of things that he needed to process.” SR. During those Q & A’s, will there be any topics that are off-limits, or will you be pretty much an open book?

DE. I’m an open book man! I say bring it on, whatever it is.

SR. That’s good to hear. In that case we’d like to ask you a few things about Megadeth. First of all: We never found out the whole reason for last year’s Soundwave cancellation. Everyone was devastated here. What happened?

DE. You saw it on Twitter man, it was out there and it was public. Dave and A.J. (A.J. Maddah, the promoter of Soundwave) were talking about it on Twitter and facebook. I will say this: there were a lot of us who were very disappointed that we could not go. That was all going down around the time that we were first talking about my spoken word-shows. Part of me was like: “Screw this, let me get on a plane right now and do my spoken word show there now!” But that would have been an inappropriate time to do it, so I had to find a nice window of time to do it. As a member of Megadeth I’m really looking forward to be connected with or fans again, especially because we didn’t get there last year.

“…there were a lot of us who were very disappointed that we could not go. That was all going down around the time that we were first talking about my spoken word-shows.”

SR. It sucks you didn’t do Soundwave but you were part of the Big 4 Tour with Slayer, Anthrax and Metallica. How did you feel waking up after the first Big 4 Concert and realizing you just played at one of the biggest live events in metal history?

DE. It was amazing. The first day was in Poland and there were over a hundred thousand people there. That is further then the eye can see, you literally can’t see the end of the audience from the stage.

Metallica risked a lot to do that, but they were there supporting everybody and cheering us on. It definitely was in the name of thrash metal and we did it for our fans. There were a lot of firsts, most of all obviously for Dave & the Metallica-guys to play together on such a world stage. When you do this kind of work, everything is in the public eye. It is not like these are private matters you can sort out in your own privacy. So I felt great happiness for Dave – and for the Metallica-guys – that they were able to have that moment together on stage and share a tune, and of course many more of those happened during the following shows. A lot of really bold things were done with the Big 4. It broke down a lot of barriers on a lot of levels for a lot of people.

I particularly remember the day after the show in Sofia, Bulgaria, where we all did the ‘Am I Evil’-jam together. Me & Dave were on the way to the airport the next day and it seemed like he had a lot of relief, there was a big weight off his shoulders. I had only just come back to the band just a few months before that (Ellefson left after the band temporarily disbanded in 2002 and re-joined in 2010), so I was very happy to see all these big things and these huge shifts happen in Dave’s life. He was able to process and work through a bunch of things that he needed to process.

SR. Speaking about things you need to process, of course we also want to know what’s going on with Megadeth right now; how has life changed for you & Dave (Mustaine) after the departure of Shawn & Chris (drummer Shawn Drover and guitarist Chris Broderick quit the band in November last year)?

DE. It is obviously going to be different without them. We spent five years together with them in that line-up, that is a long time. We did multiple live albums with them, two studio albums, we toured together. So it’s a bit like some family members are gone. Especially through the holidays I’ve kinda been a little sad about it, I realize that they wanted to move onto something else and I support them as my friends, but selfishly I’m definitely going to miss them for sure. Things are moving forward of course and there will be a new development happening on that front.

SR. So what’s the status with the search for their replacements? Will you be bringing back some former members? DE.I can’t talk about it yet, I can’t say anything. Most importantly we’re moving forward with writing a new album. Once we get into the studio to record it, then the line-up will naturally evolve around that.

SR. When is that new album coming out? I thought Megadeth was taking a break this year.

DE. No, it’s supposed to come out later this year!

SR. That’s great news. Before we go can you give us a sneak peek at your upcoming performances by sharing a juicy anecdote with us?

Gee, where shall I start? Here’s a funny one: one time in 1987 or 1988 me, Dave and Chuck Behler (Megadeth’s at the time drummer) shared a band apartment over in Silverlake, which is in eastern Hollywood. The doorbell rang, and there was this Japanese girl standing there with a six-pack of beer. I couldn’t understand her and tried to ask her how she found out where we lived. She then showed me a picture she took of me at a train station in Japan a couple of months earlier, and on the back of my bag was my address. She flew over from Tokyo, got a room at the Hyatt Hotel on the Sunset Strip and then took a bus down to our apartment. All to meet me and Dave. I was like it “This is it! She has won the Fan Of A Lifetime Award!”

*Images for illustration purposes via. Nuclear Blast. No Commercial gains