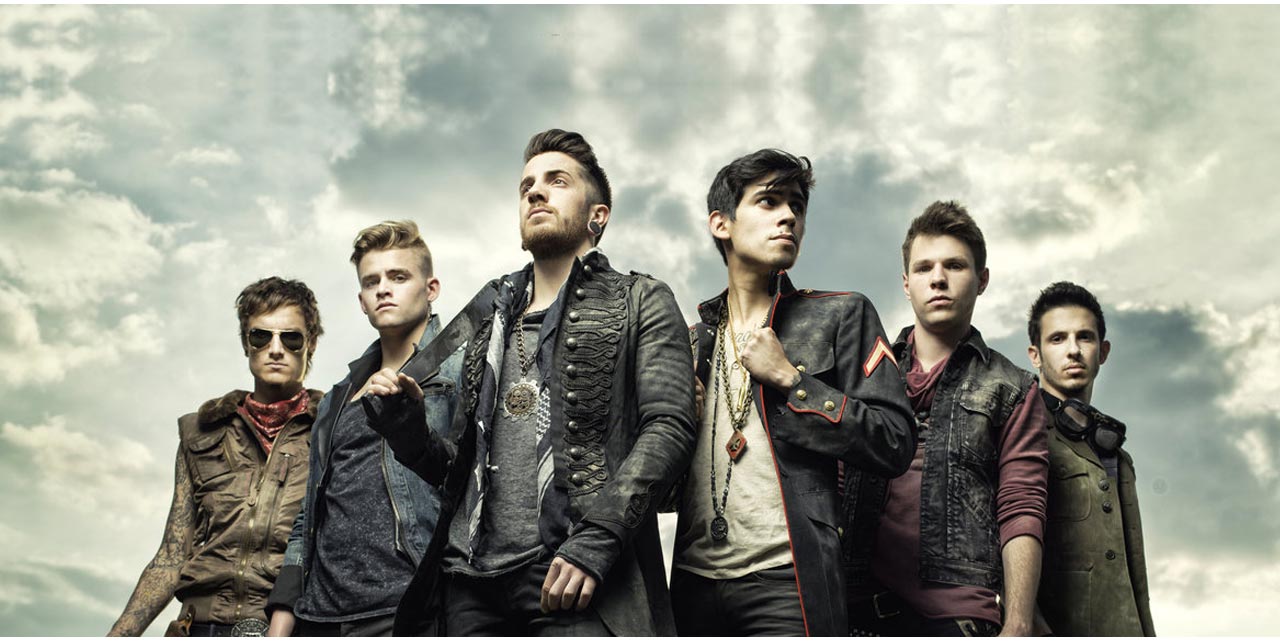 After a solid presentation at Vans Warped 2013, Texas’ metalcore rockers Crown The Empire are returning Down Under next year to play at Soundwave festival.

Thanks to Soundwave touring we had the chance to get in touch with the band’s guitarist Brandon Hoover, in order to find out more about their new album The Resistance: Rise of The Runaways, the Vans Warped tour, playing at Soundwave 2015, and much more.

SR. You guys recently visited us to play at Vans Warped 2013. How was that experience?

It was our first time in Australia so we didn’t know what to expect! It’s so beautiful there and we got to explore a ton, surf and see the sites. Unfortunately nobody knew us so the crowds were insanely small at our stage. I remember one show there was like 20 people so we literally ran around the drum riser in circles and Andy climbed on top of Hayden while he was playing bass haha good times! It’ll be way better this time around playing Soundwave and being more well known. SR. Now you are heading back to play at Soundwave 2015, the biggest festival in Asia-Pacific. How is the band getting fuelled to jump in our biggest metal stage and face the Aussie crowd?

We are so stoked to be playing Soundwave in 2015. It has been a dream of ours for so long to play and the line up is INSANE!

SR. You recently released your second studio album “The Resistance: Rise of The Runaways”, getting a great ranking in the billboard charts and mostly receiving positive critics. What’s your favourite song of the album and why?

It’s hard to pick a favorite! I think a song that sums the band up and how we’ve matured over the past 4 years would have to be Rise of the Runaways. It’s straight rock n’ roll with a huge chorus and solo. It’s an anthem for all of our fans to stand up and fight for what they believe in.

SR. The album features 3 acts: “A Call to Arms (Act I)”, “The Wolves of Paris (Act II)” and “Satellites (Act III)”. Can you give us more information about that creative decision? Was this originally set to be like that, or you guys changed it along the way?

The first song we started writing back on Warped Tour 2013 in the US was A Call To Arms. We knew we wanted the intro to have some evil dude talking over it and later it became the antagonist in our story of the Resistance. The Wolves of Paris and Satellites were both scores Benn had written in his free time and towards the end of our recording process we decided to fit them into the album as acts. It just kind of worked itself out.

SR. You guys are well known for your energy on stage. Do you guys have any “ritual as a band” before jumping on stage?

Before we hit the stage we always do this chant called “heating it up.” Basically we put our hands in and say “heat, heat, heat” (which came from a YouTube video) and at the end scream “TUPAC!” Funny story…Taddie heard Benn sleep talking one time and say “Do it for Tupac.” We’ve been doing it for Tupac ever since haha.

SR. The band has faced some line-up changes. Did those changes affect you in a negative way or help you to aim bigger?

We had our final line up change right before we went into the studio to record our debut album The Fallout. So to me Crown The Empire began then. It was definitely a positive change!

SR. Back to the Soundwave tour. Looking at the Soundwave 2015 line-up. If you could pick one band to jump on stage and jam some songs with. What band would you choose and why?

It would have to be between Slipknot or Slash. Slipknot has so many members as it is so no one would notice if I just hoped on stage for a couple of songs haha Slash has always been a huge influence to me as a guitarist. I read his book last year and his stories were unreal! He’s a legend.

SR. Soundwave 2015 will debut a new 2-day format. What are your expectations about the festival in general?

I think the festival is going to be one of the best we’ve ever played. We’re stoked to make new fans and prove how far we’ve come since Australia Warped Tour.

SR. Can you share with us any funny or weird stories involving a fan of the band, or any funny tour story in general?

When we went to Australia for the first time for Warped Tour, there was a restaurant near our hotel where topless chicks served us food and danced on tables haha there’s nothing like that back at home!

SR. Any message for the Aussie fans ahead of Soundwave?

Get ready to become a Runaway Aussie fans! Your initiation starts at Soundwave 2015, and we want to recruit all of you.

Crown The Empire Performing at Soundwave 2015

For tickets and more information head to:

*Images for Illustration purposes via.  Soundwave Festival. No Commercial Gains