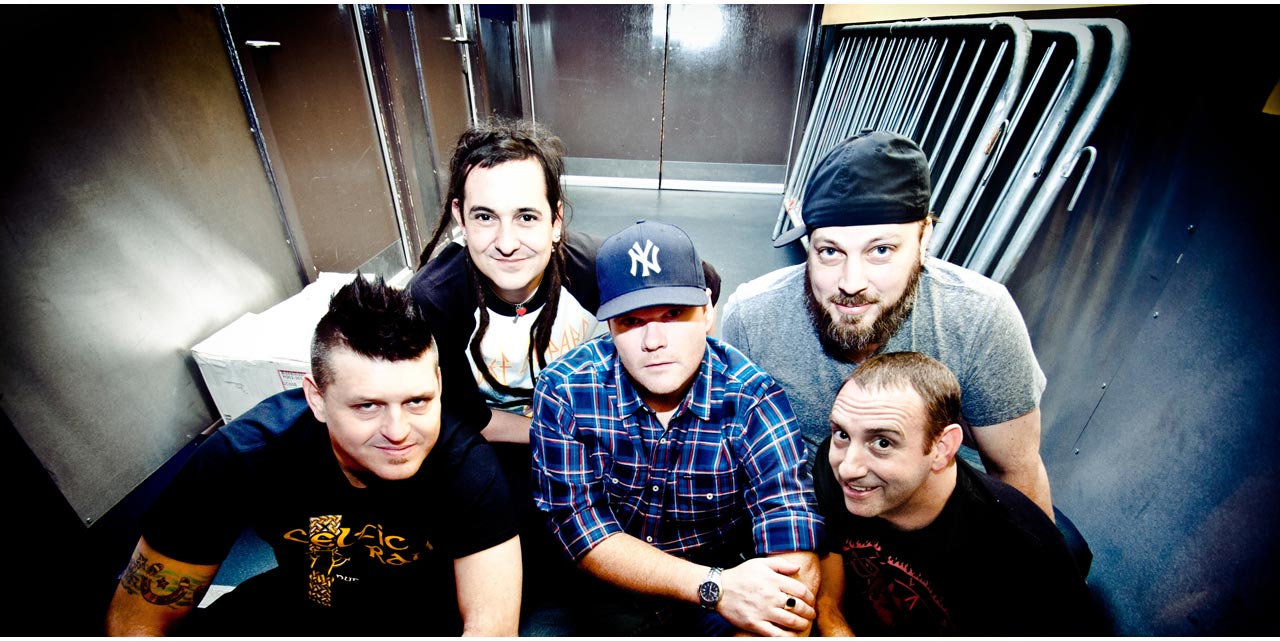 For over two decades, Florida’s Less than Jake have been energising audiences around the world with their hook-filled brand of ska punk. Their acclaimed full-length debut, Pezcore, attracted international attention and follow-up efforts, Losing Streak and Hello Rockview, each yielded a string of characteristically short, sharp hits. 2003’s successful Anthem enjoyed high radio rotation, firmly securing the band’s status as headliners and festival favourites. To date, the guys have released eight studio albums and have plans to start work on a ninth later this year. Next month, along with their brother band, Reel Big Fish, the guys will once again have Aussie audiences up and skanking to their razor riffs, smooth basslines, and blazing horns. Today we spoke to Chris DeMakes about the band’s history and the upcoming tour.

SR: Hi Chris, thanks for talking with us today.

CD: No problem. Thank you!

SR: It’s been 20 years since you released Pezcore, and just a little more since the beginning of Less than Jake. Congratulations on a great career.

CD: Thank you very much.

SR: How do you think you’ve evolved in the last 20 years?

CD: Well, I’d like to think that we are definitely a better live band now than we’ve ever been. We’ve had 23 years of practice. I would hope we are (laughs). And we’re better musicians, so those are definitely two things on the plus side.

SR: What do you think of the ska punk bands coming out today, compared to 20 years ago?

CD: I think it’s great! I’m glad it’s still happening. There’s tons of new bands all the time – kids in high school: 15, 16, 17-year-olds that are just discovering ska music and are doing it – so it’s fantastic, you know? Probably from around 2001/2 to 2010, there was a little bit of a wall and it seems like it’s kind of becoming in vogue again.

SR: Yeah, a lot of alternative music is coming back. I think it’s a great change for the music industry, that’s for sure.

SR: I know you’ve toured with Reel Big Fish on the Shout it Loud tour in 2007. What’s this current tour been like, in comparison?

CD: Oh, it’s been great, you know. We’ve known these guys forever. They’re like our brother band…our brother from another mother, we like to say. It’s just great. I mean, we go out and the fans eat it up, you know? We’re the quintessential 90s ska punk bands, us and Reel Big Fish. It’s a great night out, it’s a great show.

SR: Oh, awesome. Well, you’re two bands who like to have fun and clown around. What’s the funniest thing that’s happened so far on the tour?

CD: Funniest thing on this tour? Oh my God! You’ll have to give me a second – there’s been too many.

CD: It’s almost every night. We did a dance-off between three guys that were super, super-fat, and they each had their shirts off, and they were shaking their boobs up and down and the audience was going crazy. So, that’s one that does come to mind.

SR: (Laughs) Yeah. Well, on your last tour, you did a Price is Right game. Do you have more crazy things, as well as the dance-off?

CD: We have other crazy things, but we didn’t dust off the old Price is Right wheel this time and bring it back out, but that was a lot of fun, too.

SR: You’ve played with some great bands, like Bad Religion, The Descendants, and Anti-Flag. Besides Reel Big Fish, who have you enjoyed playing with the most?

CD: Wow, there’s a lot of bands. Frenzal Rhomb, from Australia – love playing with those guys. Love playing with The Descendants. Um…Snuff, from England. You said Anti-Flag – they’re great. I mean, all those bands are fantastic. Bad Religion are friends of ours.

“…we get people that write us and tell us that our music got them through some very dark times, or saved their life…”

CD: Yes, we have. We just played with him the other day in Chicago (Laughs).

CD: Um, he’s hard to get near. He’s got lots of security that are really, really big guys that would pounce on you in one second, so I don’t know, you know? He’s kind of secluded.

SR: It’s just a bit of a different sort of mix, but he’s got that fun and playful side to his shows, as well.

CD: Yeah, for sure. He likes to throw a party, much like we and Reel Big Fish do, for sure. SR: Oh, sweet. Well, you have eight studio albums under your belt now. Have any of you been working on something new?

CD: We all have been, individually. But we’ve been touring so much for this last record we did. The last show this year is October 16th, and after that we’re going to start working on a new record.

SR: Oh, excellent. Well, now that record sales are making a comeback, have your vinyl sales been noticeably good?

CD: Yeah, our vinyl sales have always been good. We’ve always put out vinyl records. We didn’t ever jump on a bandwagon of friends of vinyl. We’ve always done it, so we’ve always had good, steady sales.

SR: Awesome. You were here for Soundwave 2011. What are you hoping to do in Australia on this tour?

CD: Well, I’d like to hit the beach and maybe go check out a museum or a hiking trail that I haven’t done in the past and just explore what Australia has. It’s a beautiful country. I love it.

SR: Oh, it definitely is a beautiful country. What songs have you put on your Australian set list?

CD: You know, I do not know yet. We just rehearsed. We did a home town show in Gainesville, where we’re from in Florida, and we rehearsed. We did 48 songs over two nights. It was two different sets of 24 songs. So, we have a lot in our arsenal and I’m gonna say we’re gonna pick the good ones to play for Australia.

CD: You know, it’s not so much in the category of crazy, but we get people that write us and tell us that our music got them through some very dark times, or saved their life, or, you know, they were going to possibly commit suicide and all these different things. To be given that compliment, that’s the highest compliment you could get, as a song writer or as a band.

SR: Yeah, that would be touching and I think a lot of people do turn to music when they’re at their lowest moments. So, for you to be able to lift them back up must feel very heart-warming.

CD: It is, it’s like the best drug in the world. It’s amazing.

SR: Well, do you have a message for your Australian fans?

CD: Bring your party shoes and let’s do this. We love Australia and we’ve been coming to your beautiful country since 1998…1989…and it’s always a good time. And thank you for all the support all the years.

SR: Well, thanks for talking with the Spotlight Report today and good luck with your tour.

CD: Thanks. Have a great day!

*Images for illustration purposes only. No commercial gains. Band photo by Jodi Photography via. Soundwave Touring.